I was born in the mid-‘70s (yes, that long ago), and my interest in automobiles arrived before I went “clean.” The ‘80s were loaded with automotive exotica and induced drool with the Lamborghini Countach, the Ferrari Testarossa, and Samantha Fox. By the time I was really into all things with four wheels and a spoiler, the ‘90s rolled around and boy were they ever good.

All things European have long swayed my heart, but I have a large soft spot for JDM products, as well. My first car (purchased in 1993) was in fact a 1985 Mazda 626 LX coupe, followed by two MX-6 GTs so it’s safe to say that although I wanted a VW GTI, I ended up with three Japanese cars -- actions speak louder than words.

I’m looking for a time machine…
Between the late ‘80s and late ‘90s, makers such as Toyota, Honda, Nissan, and Mazda were spewing out cars like the Celica Alltrac, the Supra, the NSX, the Integra Type R, the 240 SX, the 300ZX, the Miata and the RX-7. Seriously, after reading through that list, the last 15 years have been bland in comparison.

The final car on that list, the RX-7, holds a special place on my list of semi-attainable dream cars. The final generation of Mazda’s sports car was introduced here in 1993, and I remember spotting one for the first time in the dealership showroom where I used to take my cars for servicing. She was a Vintage Red Touring version with a manual transmission. I can’t tell you how often I sat in that car (as well as a new MX-3 and MX-6) while I was waiting on mine.

Birth of a deity
Sadly, the last FD RX-7s were sold in 1995, as the car was no longer imported for sale amidst currency issues, pricing, fuel economy, and a dwindling interest in sports cars. Production continued in Japan until 2002 when they shut it down with one final bang, the ultimate RX-7, the Spirit R.

Sure, there were numerous other special editions of the car over the years, but the final Spirit R was the culmination of all things excellent about the FD. The combination of the lightweight body, most powerful iteration of the 13B-REW twin-turbocharged 1.3L twin-rotary, forged BBS wheels, and cross-drilled brakes made for the most desirable of RX-7s.

JDM-spec
Every last one of the 1,504 RX-7s produced by Mazda were Sprit Rs in one of three trims: the "Type A," "Type B," and "Type C." The important version is the A, of which 1,000 were assembled for the Japanese domestic market. If you understand what that means, you’ll have caught on that they were all right-hand drive.

A real unicorn
Stories vary as to the origin of this unique car. Some say Mazda North America wanted one so they modified an existing FD with all the Spirit R’s tasty bits. I’ve also heard that this car was a gift for the then US President of the company. An actual Spirit R was imported and converted to LHD for him by employees. This explains the car’s uniqueness and special VIN number you’ll see in the gallery.

With all of this, the opportunity to have spent time with this special Spirit R has been nothing short of a blessing.

But, this is no regular spoiler on the Spirit R as it is adjustable, the wheels are lightweight and, well, the foglights are part of a bumper that FD fans would kill for. Oh, and all of these items are grafted onto a bodyshell that made Miss Fox look fat -- and still does.

It’s difficult to properly put into words how good this car looks. The simplicity of its lines, that front end, the pop-up headlights, the hatch, the cut line for the doors on the sides, and then the proportions, the stance… Clearly, I’m not speechless but I’m having a hard time expressing myself properly. The Titanium Gray Metallic paint job was commonplace at the time and was one of five available shades.

The seats
The cabin is very driver-centric and layout is still contemporary, minus (of course) the old-school double-din radio. The gauges are clear and the large centre-mounted tachometer is the driver’s best friend. Well, that and the sick lightweight fixed-back red RECARO front seats. Because the "Type A" is a two-seater, these seats and the absence of a rear bench cut over 10 kg from the car’s weight.  But enough of that…

Gentlemen and their crazy ideas…
Legend has it that there was once something like a Japanese horsepower pact in the ‘90s where 276 hp was the “max” a production car could put out. If you take the time to search through Skyline, WRX, EVO, NSX and ZX specs sheets, you’ll note that their outputs are identical. The most powerful RX-7 released? You guessed it: 276 hp.

The twin-turbocharged 13B engine is a marvel. The sequential charger setup -- two turbos in series -- seamlessly force-feeds the intake. That’s the best way to describe the way this small mill generates its gusto: seamlessly. Boosted engines, especially from the ‘80s and ‘90s were notorious for lag followed by full-on sideways, following a burst in power. A rotary engine, by definition, is very linear: as rpms climb, output does the same. Boost it with two turbos and, wow.

From where I sat, it did not feel that fast, but then again I did not outright mash the throttle and rip through the gears with the intent on setting a time. This is the impression that such linear power delivery imposes. Right around 5,000 rpm is where the rotary felt happiest, but it would effortlessly reach for its 8,000-rpm redline without fail.

Drives like the best from the ‘90s
And that sound. Like a gail-force wind sucking and blowing at the same time with a hint of mechanical crescendo, the on-off go-pedal made it all happen. The slightest pressure on the throttle excites the powertrain, while backing off immediately shuts it all down. Rowing the 5-speed manual transmission thus required spot-on synchronicity in order to avoid jerking or chocking. Once harnessed, however, pounding the gears (up or down) with a proper throttle blip became menacingly addictive.

The RX-7 is an impressive handler. In fact, it’s deceptively good. Weight distribution is 50/50, the car’s fairly light, and the double-wishbone suspension is calibrated for maximum adherence. The deceptive part comes from the fact that the RX-7’s tactile communication with the driver is so unfiltered that I got the impression that mid-corner the ravine was coming straight at me -- but it never was. The real issue was the old -- very old -- Bridgestone Potenza SO-3 tires that had likely been on the car for a decade or more.

Through the steering wheel and the good ol’ response, along with the precise hydraulic steering, the road surface sends subtle vibrations to the driver’s hands. This in conjunction with the heavy-ish clutch and aforementioned throttle made for an involved drive. The desire to press on hard (and harder) was often reeled back by the fact that this car is a real unicorn, and I would be hated for the remainder of my days if I broke it.

MX-5 along for the ride
Despite the ancient rubber, this Type A Spirit R delivered the goods and the smiles. My driving partner and I made our way to Irvine from Beverly Hills in a brand new ND MX-5 with the yet to be available Sport Package. Both cars careening through the mountains pass was movie material. The RX-7 steadily pulling away as the road straightened out, the MX-5 cuddled apexes with ease, sticking to the pavement as hard as the RX, but its 155 hp were no match for the Spirit.

By mid-afternoon, it was time to return to the car to its rightful owners. Even though we got loads of pictures while on the drive, we could not help ourselves and had another serving of RX-7 though another photo séance.

Gods do not age
Unlike a supermodel from the ‘90s, this one still looks incredible all these years later and has had no work done. I’ve had the rare chance to sample one of the greatest Japanese cars from the ‘90s, and unlike meeting your hero and being disappointed, the Spirit R’s holiness has touched me and remains with me… 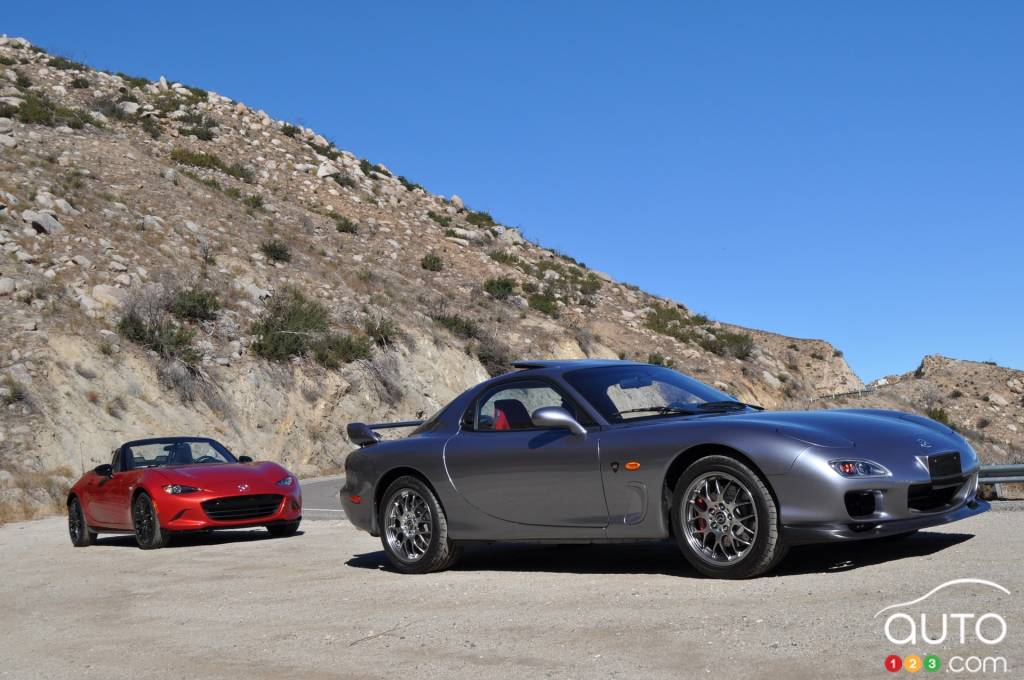 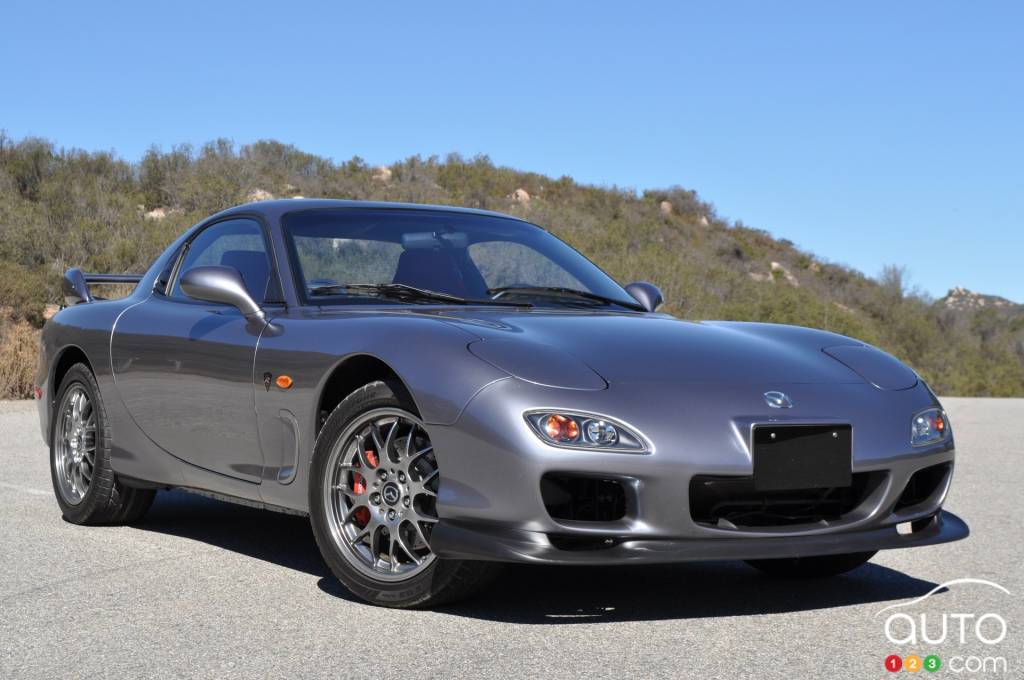 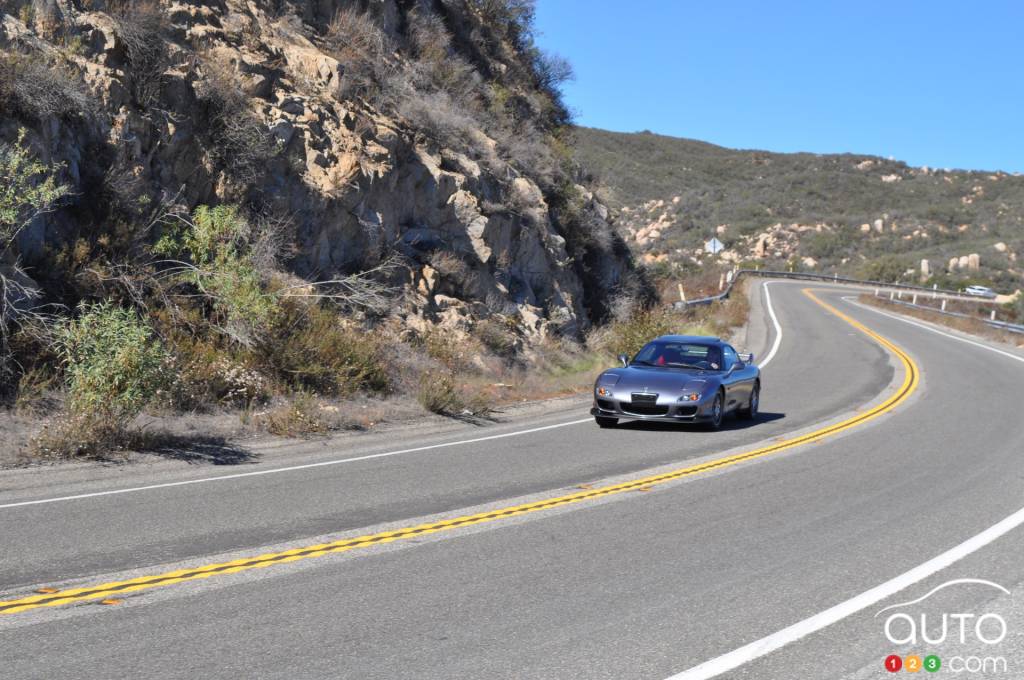 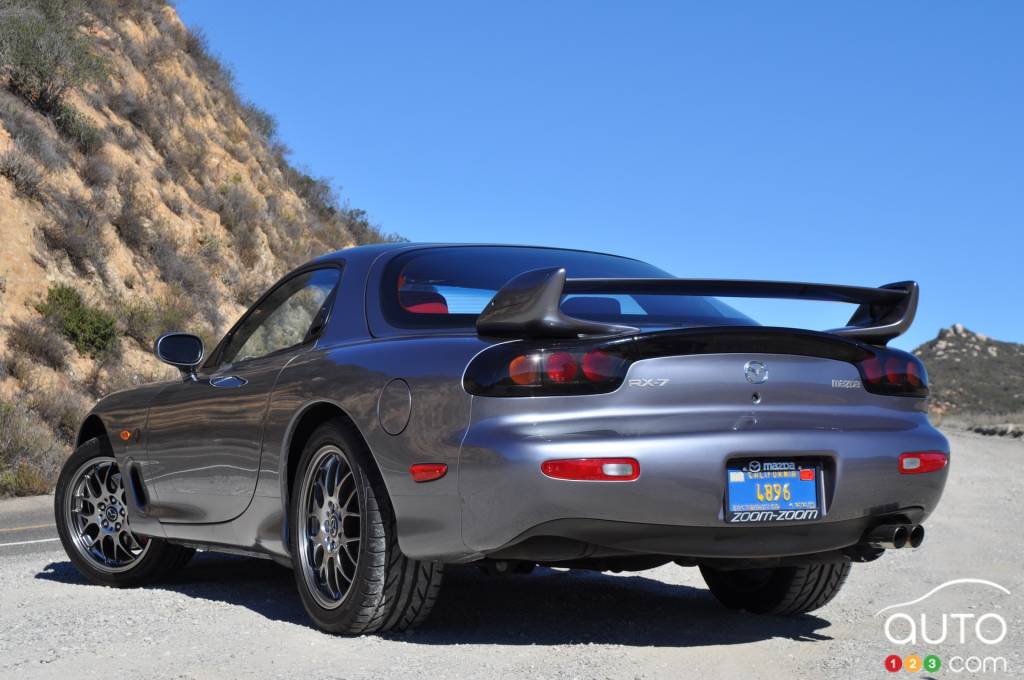 Can’t make it to the Mazda Museum in Hiroshima, Japan? Now you can visit the newly-opened museum dedicated to all things Mazda in Augsburg, Germany. You’ll d...