MINI has mastered the art of multiplying the number of models available in its lineup. For Cooper purists, the three-door chassis remains the uncontested icon of the lot, but the fact is that the brain-trust at the British automaker was wise to throw in its lot in the pocket crossover market with this new utility version.

And since green cars are also steadily gaining in popularity, the decision to combine the driving dynamics and (somewhat) generous interior space of the Countryman with the advantages conferred by a genuine hybrid car able to stay mostly away from the gas pump is hardly a surprising one. BMW has already produced a few electric versions of its regular models, not to mention the i3 and i8, so why not MINI? After all, the company has always prided itself on being a “plugged-in” brand…

Here then is the 2018 MINI Cooper S E Countryman ALL4, a utility vehicle that sets out to deliver driving dynamics every bit as engaging as any MINI out there (thus the “S”) while minimizing fuel costs and emissions over the long haul (hence the “E”).

But before we get down to the predictable business of falling for the charms of this plug-in MINI, one question merits asking: Is it worth it?

The costliest model…
One fact that grabs the attention right off the bat when scanning the specs sheet for the very first MINI plug-in model is… the price. With transportation fees factored in, the new hybrid crossover sets buyers back a hefty $46,775. The John Cooper Works edition, at $41,585 with transportation included, looks to be a veritable bargain in comparison.

The primary goal of a green car is to put up extraordinary fuel consumption figures and put a smile on the face of its owner, who can then feel justified in having ponied up a little extra money up front and pride in driving around in an allegedly eco-friendly car. But hold on. In this case, according to the 2018 Fuel Consumption Guide put together by Natural Resources Canada, the 2018 MINI Cooper S E Countryman ALL4 has a combined fuel consumption rating of 8.6L/100 km, while the model’s resident hot-rod version, the JCW, lists at 9.3L/100 km.

The question is, does that 0.7L/100 km difference justify the gap in price between the two models? It’s a legitimate question…

Not as fast as a JCW, but it’s close
Given the performance-oriented focus of the brand, it would have been interesting to see the hybrid Countryman surpass the JCW, but it seems that the folks at MINI wanted to maintain the latter model’s position at the top of the model power hierarchy. Still, the Cooper S E Countryman ALL4 comes in a close second in terms of 0-100 km/h acceleration (6.8 seconds versus 6.5 for the JCW); this gives a good indication as to the potential of the plug-in hybrid car.

Unlike the 4-cylinder JCW, the S E makes use of the small 3-cylinder, 134-hp turbo already familiar to consumers, matching it with a 87-hp electric motor for a total output of 221 hp. While the gasoline engine handles the front axle, the electric motor takes care of the rear – hence the “ALL4” appellation. Unfortunately, the car does not use four-wheel drive on a permanent basis; that depends on the drive mode chosen.

With such a short electric range…
A big-ish problem is that the official range in electric mode – 19 km – is just not that impressive. Compare that, for example, with the new Mitsubishi Outlander PHEV, able, at least in theory, to cover 35 km in all-electric mode. Use the new plug-in MINI in wintertime, and that paltry 19 km quickly gets downright puny. It was a lesson hard-learned for me, as the temperature during my week-long test drive hovered for the most part under -20 degrees Celsius.

Taking into consideration the vehicle’s heft (the Countryman plug-in hybrid is the heaviest of the lineup) and its (part-time) all-wheel drive system, as well as the winter driving conditions, I was not surprised by the 7.5L/100 km fuel consumption figure it racked up, a number due in good part to the “electric” kilometres I drove, I should add.

Fortunately, the driving experience itself is fairly positive, even if it’s pretty clear that the JCW edition is still the superior of its hybrid cousin.  The steering is not quite as tightly connected, and of course there’s the absence of that satisfying JCW exhaust roar, but the small 3-cylinder handles itself well nonetheless. What’s more, the appreciation grows as you rack up the kilometres.

Cabin compromises
In contrast with the aforementioned Outlander PHEV, itself brand-new on the market and likely to be its closest rival, the 2018 MINI Cooper S E Countryman ALL4 loses a few points when it comes to the cabin. In order to fit the lithium-ion battery under the chassis in the rear, the engineers were obliged to cut into the utility space of this… utility model! Which means the trunk is smaller than those of the other Countrymans (Countrymen?), by some 45 litres in fact. Fortunately, the overall quality inside has been upgraded in comparison with the first generation of the model.

Game of options
The base price might be $43,000 and change, but the average MINI buyer will want to dress up his car with some extras. The model that we tested had $4,950 worth of optional equipment added. Add in the taxes and preparation fees, and you’re talking a sticker price north of $50,000 – a pretty substantial price to pay for being able to declare one’s green/electric mobility bone-fides. If the car could actually drive a little farther on a charge, it would make for a more compelling choice.

So is this 2018 MINI Cooper S E Countryman ALL4 worth it? In a word, no. I’d fork over for a Cooper S Countryman or even a JCW edition instead, hands down. 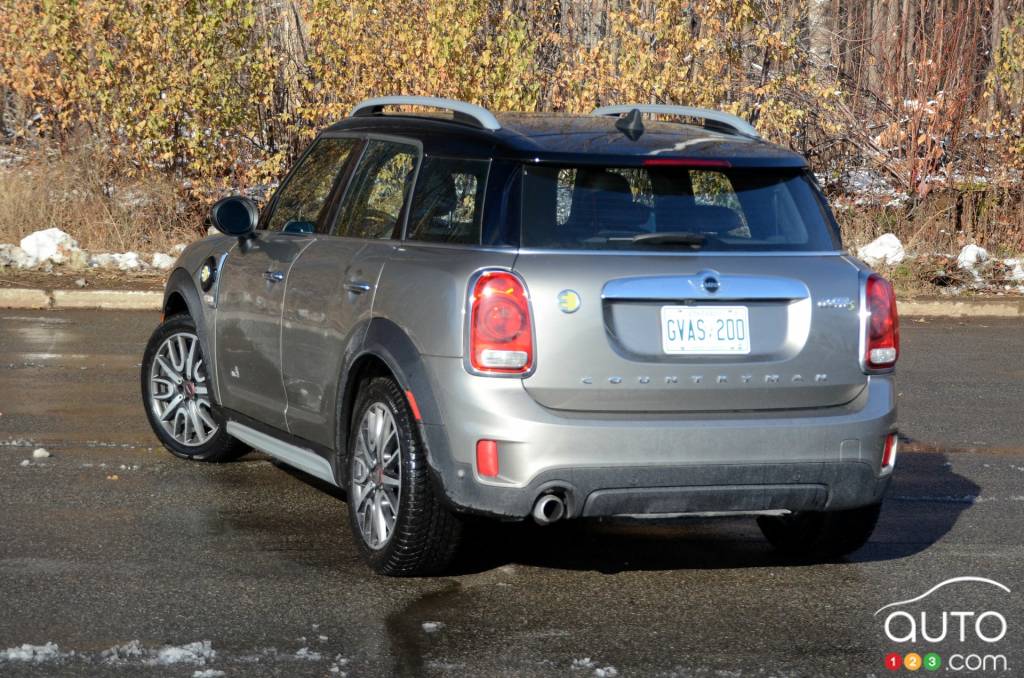 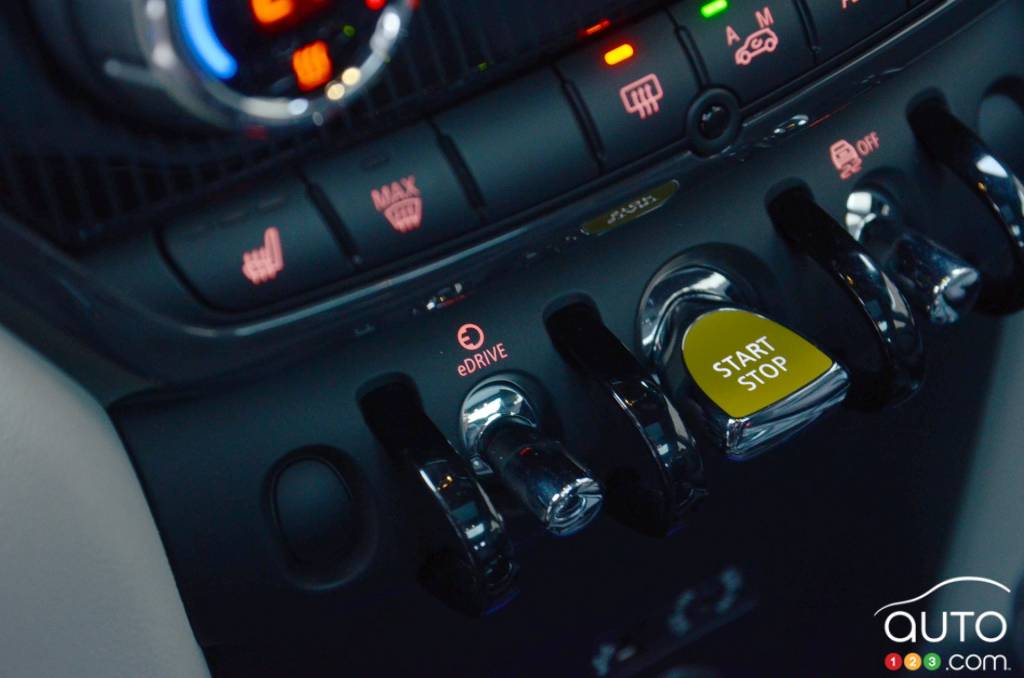 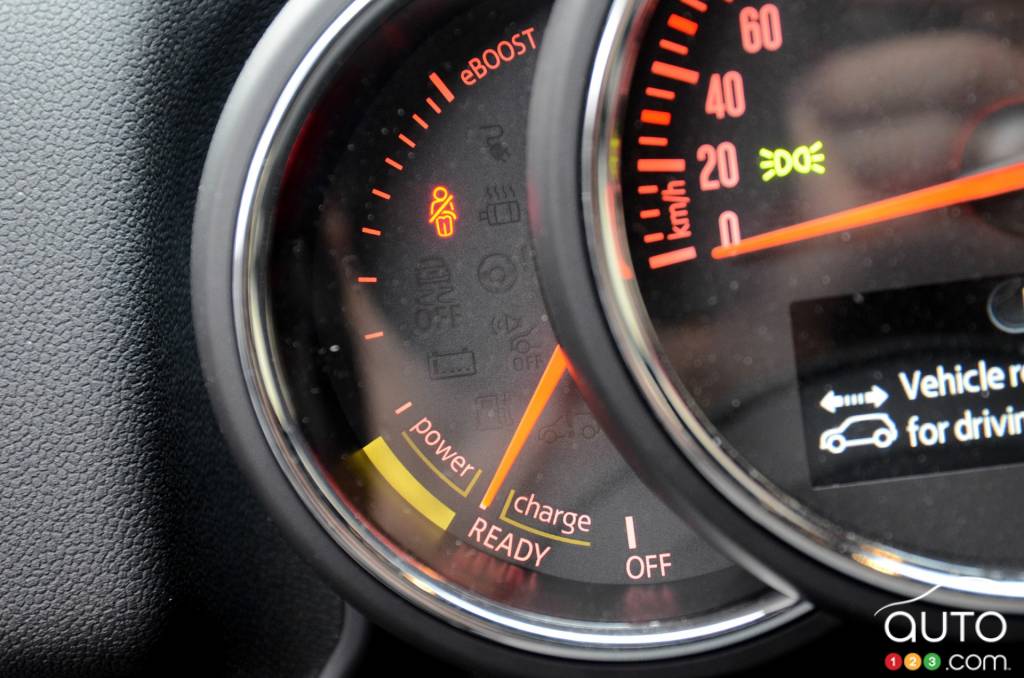 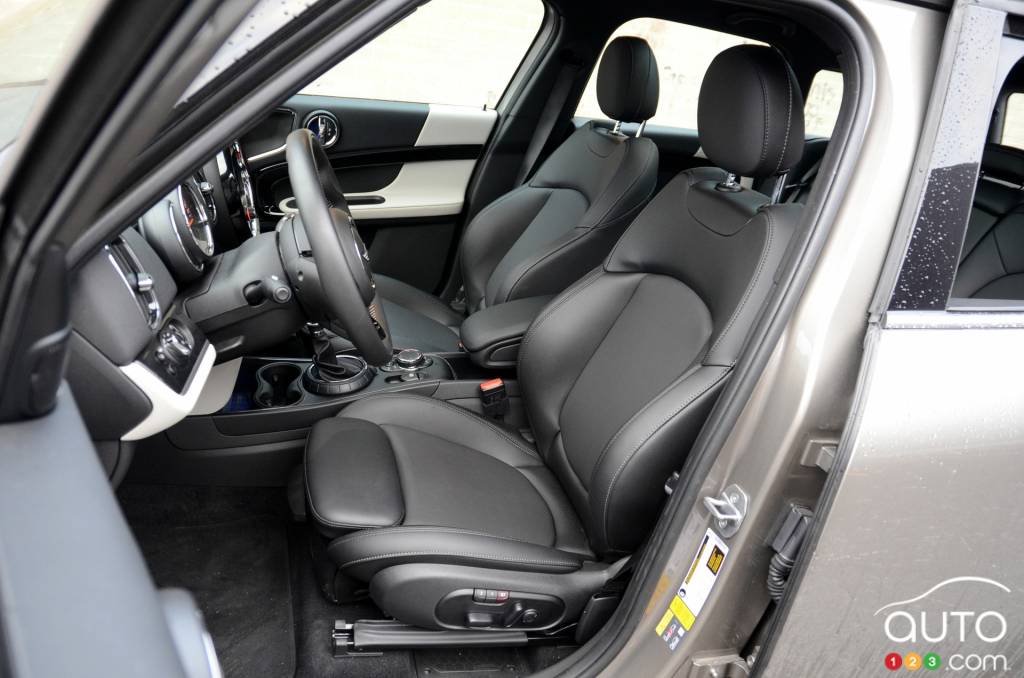 BMW is the automaker offering the largest number of electric-powered models in Canada, with seven. Auto123.com tried them out in the days leading up to the r...