BMW first introduced the X4 Sport Activity Vehicle just four years ago, and the model has gone on to sell over 200,000 units. We think this one can safely be filed under successful. Now, BMW unleashes the second-generation 2019 X4, which comes in two contrasting flavours, the X4 xDrive 30i and the wilder X4 M40i. The same model, but in two variations that correspond to completely different consumer profiles.

Longer and more dynamic
The changes brought to the next-gen X4 are nowhere near revolutionary in scale or importance, but they do amount to a substantial refresh, one that shows BMW more fully combining sportiness and elegance. 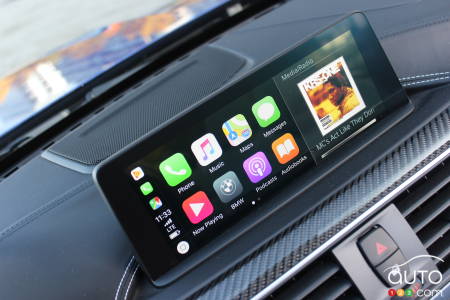 One change is that the X4 is now bigger (longer by 7.6 cm and wider by 3.5 cm), even as it sits on the same chassis as the X3. At the same time its weight has been reduced, by as much as 50 kg depending on the trim. This comes via the ample use of both steel and aluminum for the chassis and some other components.

The main visual feature of the X4 is its impossible-to-overlook sloping roofline. It certainly gives the model a sharp look, but the flipside of that is that it makes accessing the back row trickier and shrinks headroom in that row. Focus on ergonomics and elegance
Once inside, there’s no questioning the amount of space in the front row. In back it’s another story.  Adults will have to do a little self-contorting to get themselves in there. Once inside, comfort level is actually pretty good in the second row – the seating, the heating for that seating, the separate climate control system and the massive panoramic power sunroof that inundates the space with light are all big delights for passengers to help them forget the struggle to squeeze in.

The design of the dashboard has been rejigged to make it more contemporary and driver-oriented for improved ergonomics. The trick was to retain the overall sobriety of the environment, something BMW always does so well - and it has succeeded here once again. The inclusion of a larger 10.25-inch screen and a more prominent heads-up display makes the X4 more user-friendly as well. Another focus of the 2019 BMW X4 was to maximize drivers’ comfort. It starts with the quiet that reigns in the cabin, and moves to the premium leather on the heated and ventilated seats before concluding with the heated steering wheel and three-zone climate control. All of this is done with the intent of making every outing in the X4 a memorable experience. Get ready to make excuses to take it out for an errand or a drive or a long road trip, especially if you opt for the 4.0L engine.

The trunk of this coupe-style Sport Activity Vehicle has a cargo volume of 525 litres; that expands to 1,430 litres when the rear seats are folded down. These are not exceptional numbers, to be sure, but they fall into the average for this type of vehicle. Can’t have your sloping-roofline cake and eat it too... 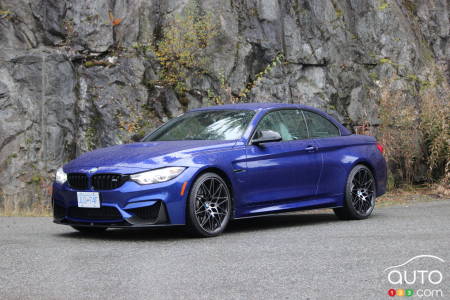 More safety and tech than ever
BMW put effort into making its X4 the most fun to drive as possible, but also as safe and convenient as ever. The 2019 edition welcomes several new technologies, for example an upgraded voice recognition system that detects not just basic vocal commands but also hand gestures. In the case of the latter, the system takes its cue from hand movements to change the volume or the track on the audio system, or to change the smartphone options.

While this feature undoubtedly improves safety on the road by allowing the driver to keep their hands on the wheel more of the time, it’s also possible to deactivate the system. Which is handy (so to speak): an off-hand (so to speak) gesture could inadvertently be taken as a directive to crank the audio volume up to 11, for example.

To further enhance safety, the Activ Guard system alerts the driver to a potential forward collision or the risk of striking a pedestrian. The system first alerts the driver of the imminent danger, and if no action is taken, it will automatically brake the vehicle to stop it and diminish the severity of a collision. And… under the hood?
Each version of the 2019 BMW X4 comes with an 8-speed automatic transmission, but there the resemblance between the two largely end. Our tester was equipped with a beefy 4.0L engine.

The M40i we drove comes with the BMW M Performance treatment. Its inline-6 delivers 355 hp and 365 lb-ft of torque and it powers the SUV from a stop to 100 km/h in 4.8 seconds. This is potent enough to press you deep into your seat after having done little more than breathe on the accelerator pedal. This edition also comes very well-equipped to help you keep control over the awesome power available to you. The M sport brakes get larger brake discs and M calipers. Meanwhile, peppering the exterior are small M logos to make it clear what kind of jacked-up utility vehicle you’re driving. 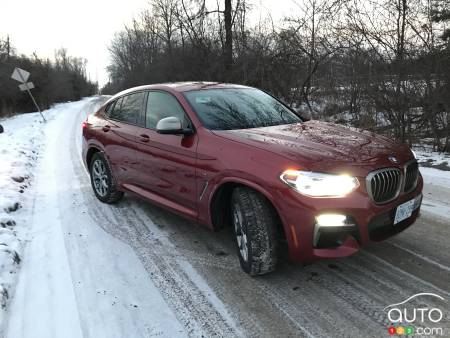 Lastly – and here we kept the best for last – the exhaust system is simply magnificent! The diabolical sound emanating from the engine is pretty much impossible to resist. And it makes it impossible to drive around incognito in your X4. What’s more, the exhaust is decked in bold black to enhance the SUV’s overall look. We had previously tested the X3 equipped with the M40i engine, and had already fallen under the spell of that regally brutal BMW sound. This engine is as fun to listen to as it is to put through its paces on the road!

In terms of fuel consumption, the official rating for the 2019 X4 M40i is 9.2L/100 km combined. At the end of our week-long test, which was weighted towards in-city driving, we were nowhere close to that; our final figure was around 14L/100 km. 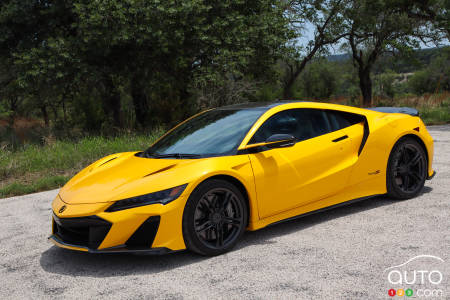 Pluses and minuses of the second-generation 2019 BMW X4
The strong points of this SUV are clear: a highly positive, engaging and well-balanced driving experience marked notably by responsive steering, on-board comfort and reassuring safety features.

As it happens our week with the new X4 was marked by a significant snowstorm. Equipped with Pirelli winter tires, the SUV withstood all our attempts to find fault large or small on snow and icy roads. The X4 stubbornly sticks to the road surface, whether you’re accelerating hard or braking with purpose. Those Pirelli tires undoubtedly helped its cause, but so did the all-wheel-drive system, such a must to have in wintertime.

While the reduced height of the coupe-style-SUV format does make the X4 into a better handler, in our view its shape is a mixed blessing, because the sloping roofline penalizes the driver’s visibility out the back. The optional blind spot monitor function and the 360-degree camera are, in a model like this, pretty indispensable add-ons. 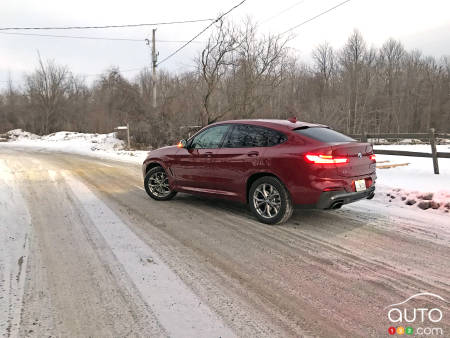 Competition in this segment is daunting for the BMW entrant, with the main rival being the Mercedes-Benz GLC and its variants.

Obviously, the price point of the base xDrive 30i version inflicts (relatively) less pain on the budget with its starting price of $53,000. The M40i for its part starts at $66,000. And beware, in both cases the final tally can climb precipitously once you start ticking off some of the myriad options of all types that BMW makes available for the X4.

This new offering from BMW proves that the German automaker has few rivals when it comes to making sporty vehicles, and the X4 backs down from no one in the domain. And while the majority of buyers will likely turn to the xDrive 30i and its more reasonable price, the M40i is the one that offers the most, and most interesting, new features and upgrades for this new generation. 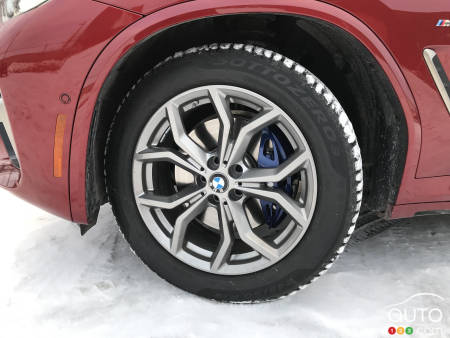 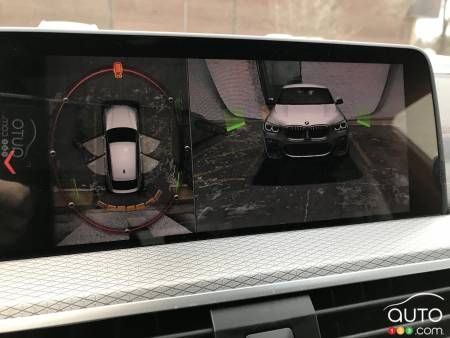 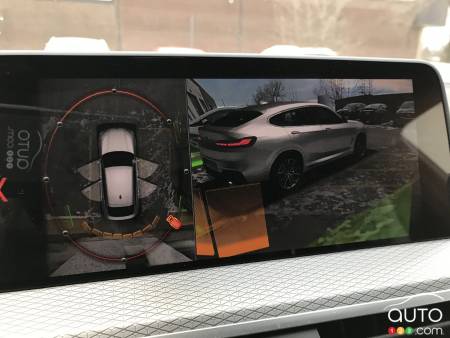 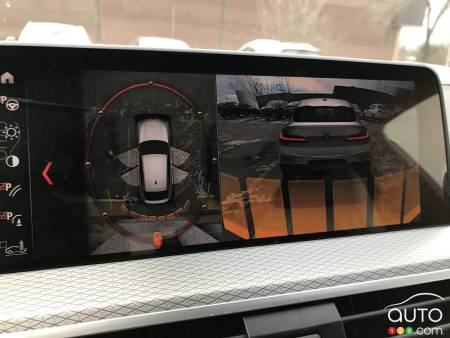 BMW products are offered in several variations, and the most highly prized are the ones produced by the company’s M performance division. The M3 and M5 have ...

What can we expect from the redesigned new BMW X4? For starters, a choice of two well-equipped, high-performance versions, both sporting an updated, contempo...