Our unofficial Auto123 Convertible Week continues with a look at the 2019 Fiat 124 Abarth, an Italian car that’s half-Japanese, from a brand that’s barely hanging on by its fingertips to the edges of the North American market.

When Fiat announced it was returning to North America for the 2012 year, enthusiasm was mixed with equal parts skepticism. The move was logical in the wake of the merger with Chrysler, but the word on many lips was reliability. Let’s just say that the Italian brand’s track record in that regard has long been spotty. Still, we all hoped for the best.

The best didn’t come to pass, unfortunately. A bit over seven years later, an honest assessment has to acknowledge that the experience has been catastrophic. Fiat struggles, to put it mildly, to sell its vehicles on our continent.

To add insult to injury, the best-selling Fiat product on this side of the Atlantic this year is… a Mazda. 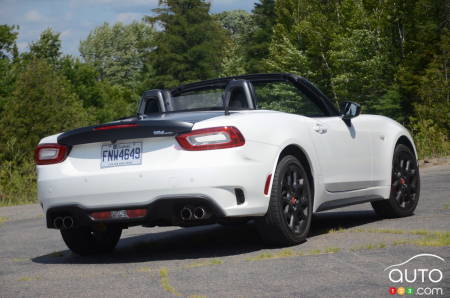 Within the walls of Fiat Chrysler Automobiles (FCQ) HQ, there’s a plan for Fiat. It was announced last year by then-boss Sergio Marchionne, not long before his death. We mentioned it briefly in our review of the 500X model and its new engine, which we tried this summer in New York City. We’ll see how that plan plays out, but whatever it is, Fiat’s road ahead is a long, tough, uphill climb. On slippery ground.

In the meantime, here’s what awaits you, if you decide on a 124 convertible from Fiat.

A Mazda, Italian-style
The 124, as many of you know, was born of a partnership between Fiat and Mazda, which lent the basics of its MX-5 in the creation of its Italian cousin. As for the 124 moniker, a quick search online will lead you to its ancestor, produced between 1966 and 1985. And that earlier car is nothing less than a legend.

The modern version might be sitting on a Japanese chassis, but its mechanics are Italian, along with its suspension settings. Which means we have a car that behaves like the MX-5, except not. 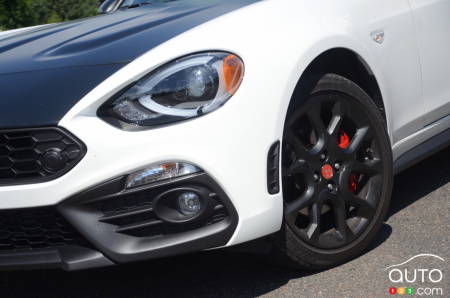 Not to worry, however. The basic ingredients of the MX-5’s successful recipe are in place. The steering is precise, the dynamics of the drive are well-balanced, the gearbox is pleasant to use, pretty much all you need for a positive driving experience are there. More on that in a bit.

The design: a question of taste
Aside from the general dimensions, the Fiat 124 doesn’t actually look like the MX-5, which is a good thing. Buyers have two distinct choices in front of them, especially since the mechanical organs are not the same. Personally I prefer the look of the 124, but that’s in the eye of the beholder. It’s more-unique character floats my boat.

Esthetically, the Abarth variant I drove features unique logos, exclusive wheels and a black finish on the hood and the trunk, which is a wink of the eye to the brand’s rich past. It’s also an option that will cost you an extra $2,995. 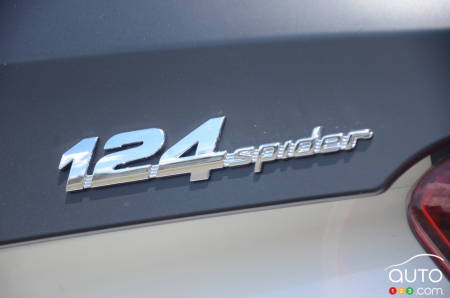 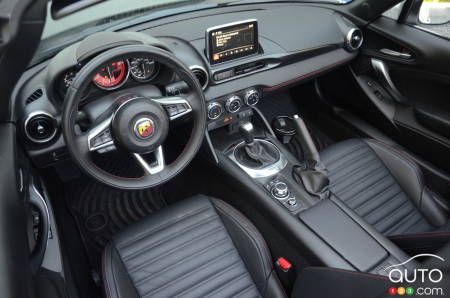 Phone booth
Inside, at the risk of stating the obvious, space is limited. This kind of environment has its good and its bad sides. You’re pretty sure to get a good driving position, and all the commands you need are close at hand. At the same time, storage space is practically non-existent and you have to accept that you’re going to be knocking into things and catching your shirt sleeves on things.

Comfort level is decent, but my Montreal-NYC return trip did leave its mark. I would recommend the optional Recaro seats with this version. The cabin is predictably noisy when on the highway, in fact once past 90 km/h your ears would really appreciate it if you closed the damn roof. And forget about the $1,600 options package featuring nav and a premium 9-speaker Bose audio system – you’ll never make proper use of it.

The multimedia system, meanwhile, feels kind of Flintstones-era. Here the finger should be pointed at Mazda, because the interior environment carries its signature. Its system is simply outdated, and you lose time criss-crossing the menus, and the interface is old-school, but not good old-school. This is doubly disappointing given that FCA has, in-house, one of the best multimedia systems on the market in the Uconnect. 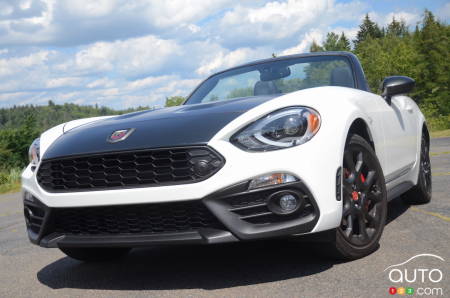 That’s it for the brickbats, now for a bouquet. Specifically, I’m thinking of the system that lowers and raises the roof. It can all be done with one hand. On the highway, at the approach of a heavy rain shower, I pulled over in an emergency manoeuvre to the side of the road, and I kid you not, within five seconds of having come to a stop, I was back on the road, my head (and the interior!) safe and sound. Then when the skies cleared, I opened her up again when driving at under 30 km/h. It was all child’s play.

Abarth powertrain and settings
The beating heart of the 124 Abarth is a 1.4L 4-cylinder turbo delivering 164 hp and 184 lb-ft of torque. This is 4 more than the regular 124, so negligeable. It’s also less than the MX-5 proposes (181 hp), which has 26 more to offer this year compared to last.

This is not very critical, however, since the power available is more than enough for the roadster. With the 6-speed manual gearbox, the 124 really comes alive in second, and then even more so in third. And because you’re sitting so low to the ground, the impression of exhilarating speed is enhanced. What matter here is the driving pleasure you get, not how long it takes you to get to 100 km/h (6.8 seconds, for what it’s worth). Here, the pleasure lasts longer, and its continual.

Compared to the MX-5, the 124 base model is slightly more comfortable, I would say. But forget all that in the case of the Abarth, designed after all for driving and not for coddling bums and backs. This version features Bilstein shocks with firmer settings. My tester also had Brembo brakes, which is a $1,995 option. 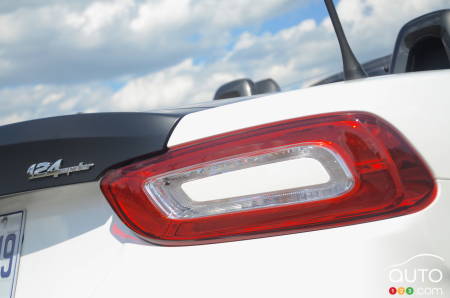 The nitty gritty
Like the MX-5, the 124 racks up more positive points than negative. In the Fiat’s case, buyers get it for its uniqueness, because otherwise you’re probably better off with the Mazda, clearly a safer buy in the long term. The 124’s rarity may play in its favour, but that’s an iffy, long-term proposition.

I would also suggest going with a base version, retailing for just under $35,000. Because well, heated side mirrors are as useful on a car like this as winter boots on the beach at Santa Monica in California. Our version, decked in all the bells and whistles, carries a price tag of $52,170, some $14,000 more than the Abarth version bereft of any options.

I repeat: with a model like, it’s the drive itself that counts. And for that, all you need is the base version.

You might also want to think twice about any long-term commitments here. There’s not enough data yet on the 124 to speak to its reliability, but as it happened during my road trip the check engine light came on – disappointing to see on a new car, let’s agree. And given the reputation of the brand in general… 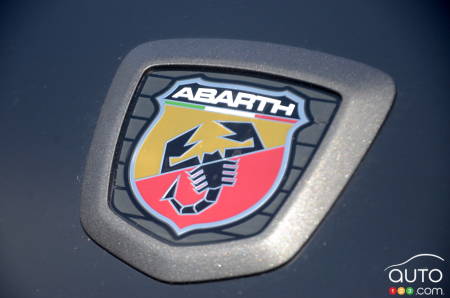 Conclusion
It’s not a bad choice to buy a Fiat 124, but you should know that this car can be more finicky than an MX-5, and that on the used-car market it may be worth less.

Then there’s the uncertain future of the brand itself to consider. I like the Fiat’s styling and the way it drives, but I’d go with an MX-5 nonetheless.

The options, largely pointless in a car like this
The Abarth version’s suspension, simply not appropriate for rough Canadian roads
Mazda outdated multimedia system 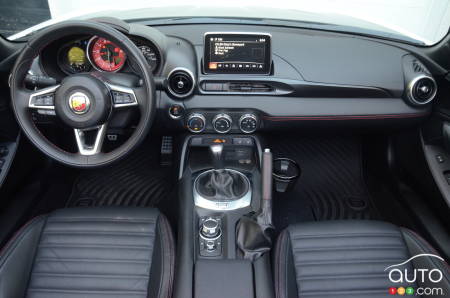 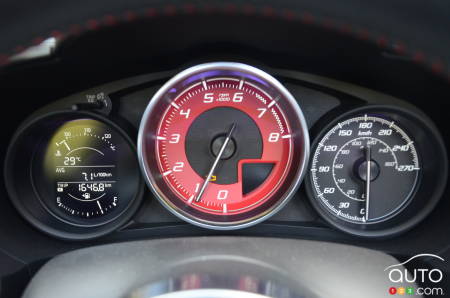