Los Angeles, CA – Above are the first few lines of Moby’s Flower, a song that originated on the B-side of his Play album but was likely made more popular by featuring in the intro credits to 2000’s Gone In 60 Seconds, starring Nicholas Cage, Giovanni Ribisi, Angelina Jolie and one heck of an angry car: a 1967 Shelby GT500 Mustang, painted in silver with black stripes. The Mustang was already a legend of the silver screen, but this cemented it in the eyes of a whole new generation of enthusiasts.

Not long after that movie came the second generation of the GT500 and now, for 2020, comes the third GT500 - and it is a doozy. We were sent to the Los Angeles area – right where Gone in 60 Seconds takes place – to put it through its paces on the Angeles Crest Highway, that storied stretch of road revered by drivers and riders alike. It’s a wonderfully bendy road that Ford hoped would showcase the fact that powerful as it is, the GT500 is more than just a drag strip demon.

First, though, the nitty-gritty.

Based on the facelifted sixth generation of the car, the GT500 does away with the flat-plane V8 from its GT350 sibling and replaces it with a cross-plane crank and a supercharger. It delivers 760 hp (making the GT350 and its 526 hp appear almost pedestrian) and 626 lb-ft of torque, making it the most powerful production Ford ever and enough for Ford to claim a 0-100 km/h sprint in 3.5 seconds. Or, for the more supercar-inclined: about 0.1 seconds faster than it took the McLaren F1 to complete the same feat.

While it does use the recently-facelifted Mustang as a basis, there’s just barely enough here to tell that they’re cut from the same cloth. The front clip is entirely re-designed, the grille opening is massive almost beyond belief and if you spec the $24,995 (!) carbon fibre track package, you get a wing the likes of which you’ve never before seen on a factory Mustang, plus carbon fibre wheels. It’s a Mustang, yes, but a mutated one that does little to hide the massive power within.

Inside
Here the differences aren’t quite so marked. Yes, there’s an Alcantara suede wheel but you could get that on the GT350. The rest is pretty standard Mustang save for the plaque on the dash in front of the passenger (different from the plaque in other editions of the muscle car) and optional carbon-fibre instrument appliqué. Even the Recaro racing seats remain optional here, as they do in the GT350, the Bullitt, the GT and so on.

You may raise an eyebrow at that, but if you select those seats you lose seat heating and auto adjust, two features that many potential owners would expect from a top-spec car like this.

Too hot for a manual?
Speaking of power: in order to achieve these figures, more tweaks had to be performed. Which brings us to the transmission, and the fact that only one is available: a 7-speed dual-clutch automatic. A manual is not an option, because it simply wouldn’t be fast enough to achieve what Ford hoped. The 100 milliseconds it takes the dual clutch to swap cogs? Yep. That’ll about do it.

“This is a numbers car,” said Ed Krenz, chief engineer of the Shelby Mustangs. “And we needed that transmission to achieve the numbers we wanted.”

Each cog swap, of course, also means a surge of acceleration, which in turn means you get to hear that glorious exhaust note over and over again. It can be made even more glorious by modifying it through the gauge cluster, a toggle switch, or by selecting “Sport” or “Track” modes. That’s not new – other Mustangs have the feature – but they don’t get that toggle switch. It’s reserved for the steering settings in the other cars. There’s instant access to all the noisy things here, and we love it.

Indeed, acceleration is so brisk here that on launch, I found myself asking for the next gear in less time that it seemed to take the gear I’d just selected to engage. That’s how enormously fast this car is. It’s perfectly planted, but the acceleration is so violent that when the GT500 squats, you really do get the impression you’re driving a speedboat, as it glides over the tarmac seemingly unimpeded by the nuisance of, you know, friction. It just pulls and pulls, to the point where I don’t doubt that it will hit 200 mph given enough tarmac. A factory Mustang good for 200 mph? That’s news in itself.

At this point I’ll commit sacrilege and admit that the aforementioned transmission really is a piece of masterwork. We knew going in that all that power was going to make the GT500 quick, we just didn’t expect it to go about its business the way it did. The box is one that feels much more like it should be in something like a Porsche 911 or Ferrari 488, not a RWD muscle car with a big, fat V8 up front. The engineers have done their homework, though, and this is an automatic transmission that is full value for the big power it’s on hand to govern.

Big rubber
Of course, big power also needs big rubber, so the GT500 comes standard with Michelin Pilot Sport Cup 2 tires with a tread and compound unique to the Shelby. They measure 305 mm at the front and 315 mm in the rear and are wrapped around 20-inch wheels as standard.

Behind those you’ll find vented Brembo brakes measuring 419 mm at the front and 368 mm at the rear, where they’re anchored by four-piston calipers. The fronts get an added two pistons and they all do their part to really grab the Shelby by the scruff of the neck and anchor it under braking.

The car may feel alike a speedboat as you hammer it, but all that grip and braking ability does a great job of giving you confidence what when the time comes, you have some of the best handling tools at your disposal to reign everything in.

The GT500 also comes with standard MagneRide suspension, meaning the shocks can self-adjust at a moment’s notice in response to what’s going on at surface level, and they’ll also change in firmness as you switch through the drive modes. They’re a big reason why the Angeles Crest was tame-able by this monster muscle car, and it only takes a few fast-paced turns to realize just how important this addition is to the GT500.

The pricing
Of course, it should come as no surprise that all that power, performance and yes, prestige, doesn’t come cheap: the GT500 starts at $94,675 before taxes or any options. Yes, you’re getting into Porsche 911 territory there, but to get even close to the power and performance provided by the GT500 from your Porsche, you need to go to the Turbo, which is currently a previous-gen version of that car that still lists at almost 200,000 smackeroons.

In the bang-for-your-buck department, the GT500 does what Mustangs, Camaros and Challengers have always done, and that’s hit the nail on the head. Though with the GT500, you’re doing it with a sledgehammer. Which is probably exactly what Ford was going for. 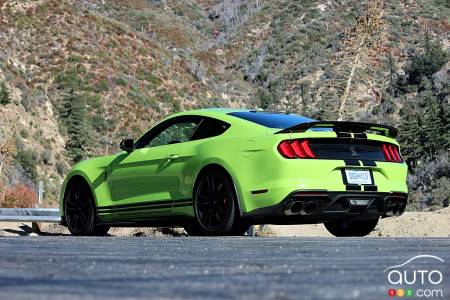 Drop four cylinders, add a turbo
Of course, if that price tag is a little out of your range – it sure as heck is out of mine – but you still want that Mustang panache and RWD, there’s always the four-cylinder EcoBoost version which, for 2020, will be available with something called the High Performance Package. It adds performance tires, exhaust, 3.55 limited-slip rear axle, big brakes, larger radiator, heavy-duty front springs and special suspension tuning plus a host of exterior upgrades to the base EcoBoost package.

That package adds $6,500 to the EcoBoost’s base MSRP of $31,080 but after sampling it on the same roads on which we sampled the GT500, I can honestly say that it adds a tangible level of performance and driver involvement to the EcoBoost experience. Remember the V6 Performance model from the previous gen? It was very good and this is more of the same.

Our tester had a 6-speed manual gearbox that was fun to row, while the self-adjusting exhaust sounds good. Actually, it sounds like something you might hear from a Veloster N or Civic Type-R, so I guess one has to decide if one doesn’t mind having one’s muscle car sound like a hot hatch. I don’t mind it, because the rest of the experience is really, really good.

The front end is light thanks to the smaller engine and turn-in is good, and while you’ll have a hard time overwhelming the rear tires in favour of “way cool drifts”, the handling is spot-on, just what a proper performance sports car should provide.

Add the fact you can get all the go-fast interior bits like Recaro seats and digital gauge cluster and you have a viable alternative that may just be able to quell those “wish I’d got the V8” thoughts that tend to crop up. 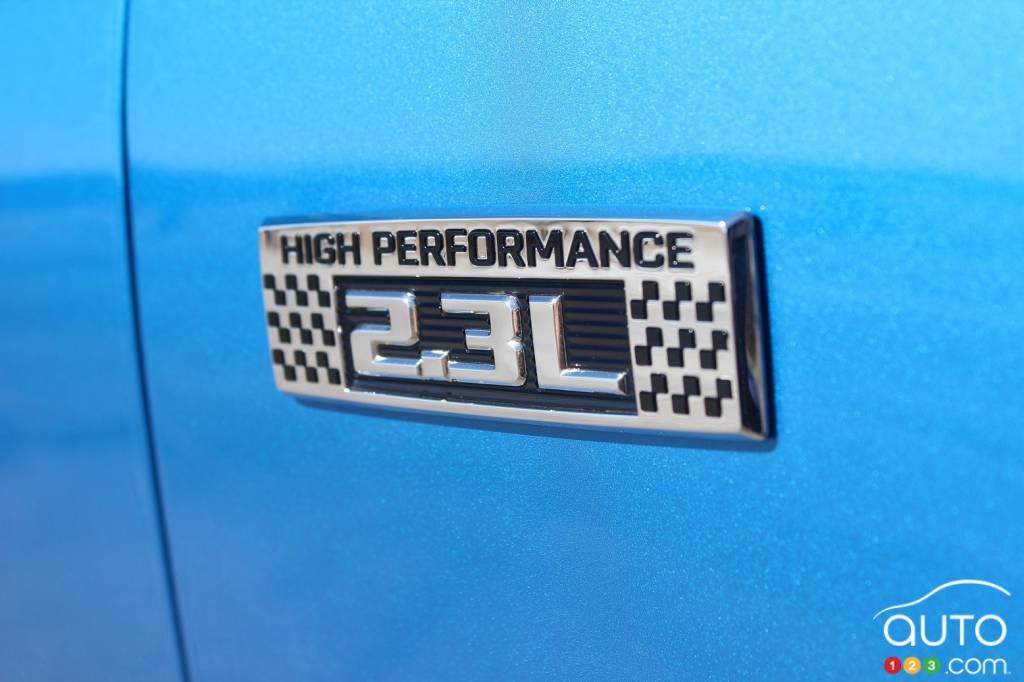 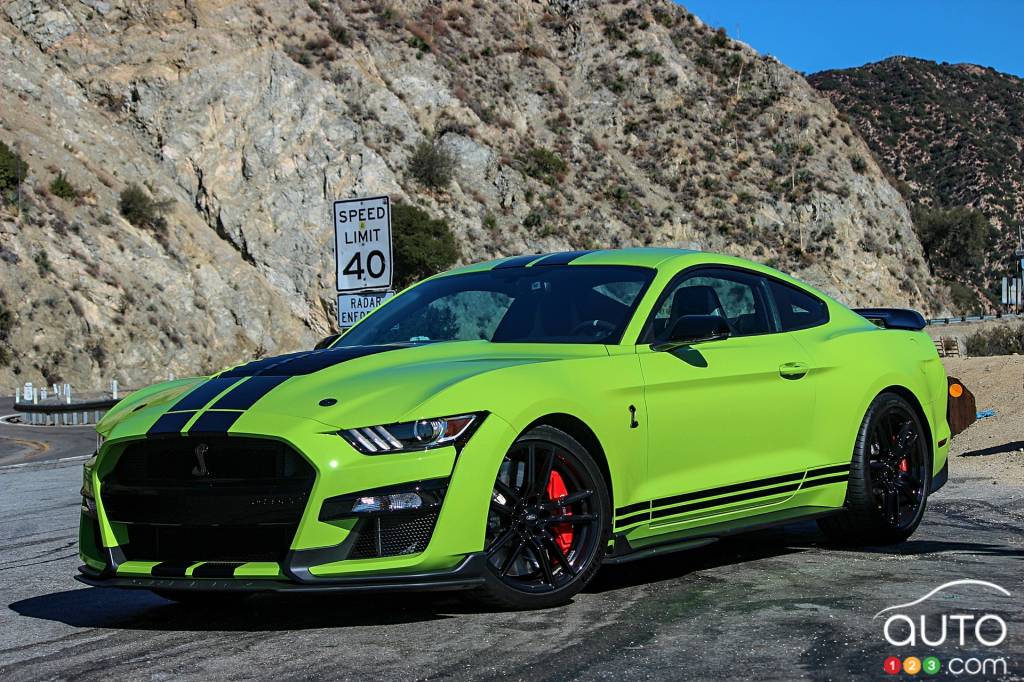 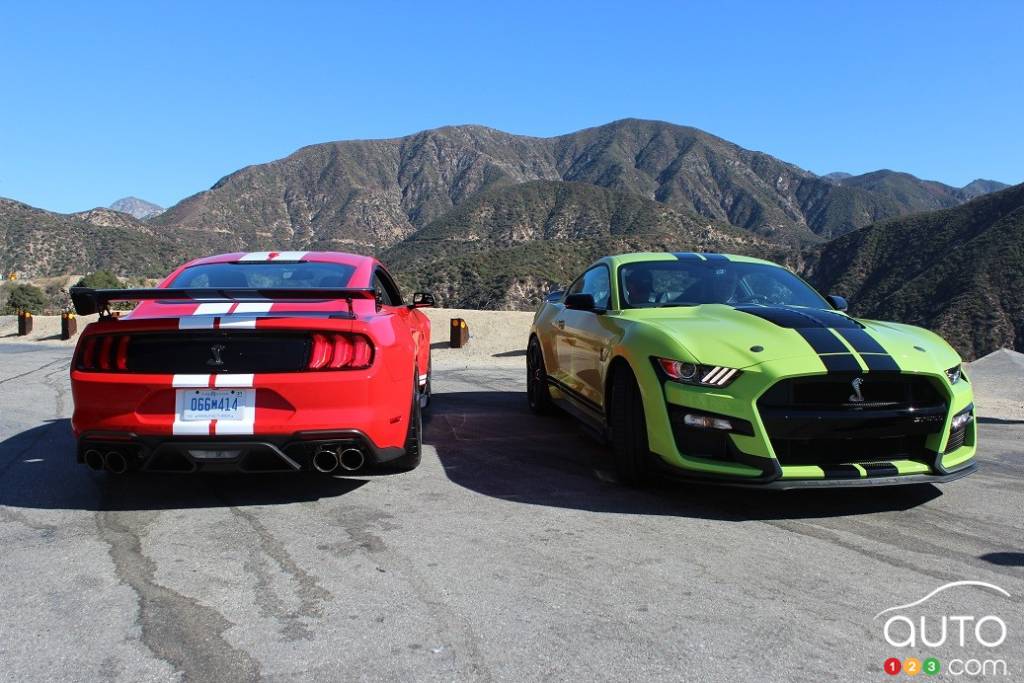 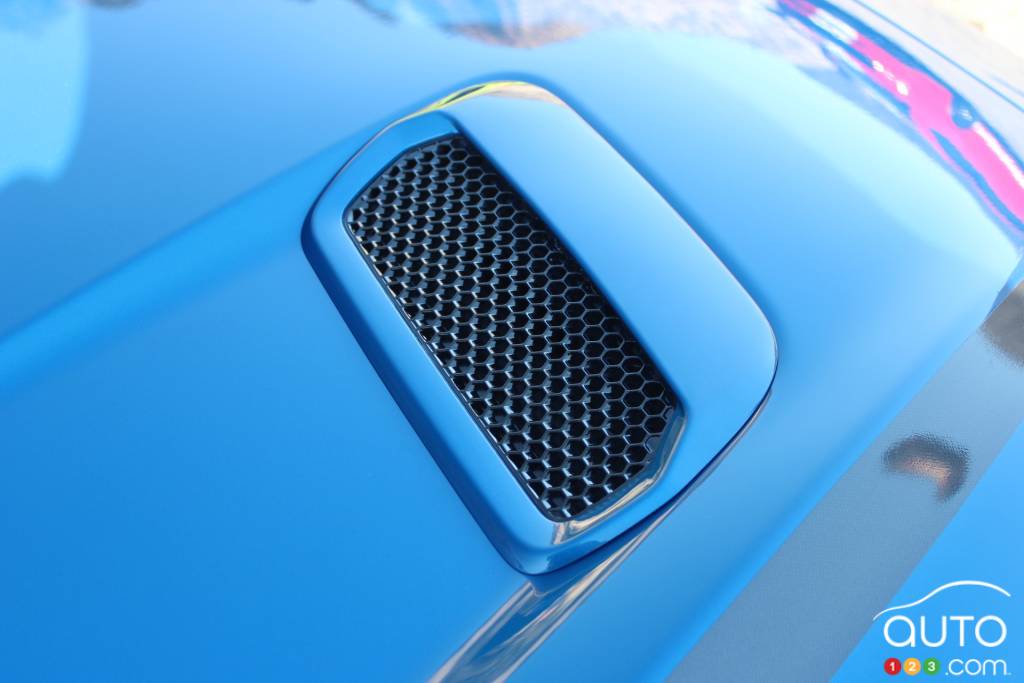