When Toyota’s 4Runner made its debut in 1984, it was basically little more than a pickup truck with a closed fiberglass box on its back. Five generations later, the vehicle still drives like a truck, in fact it's still based on a ladder truck frame. While the vehicle has evolved quite a bit in its layout, the same can't be said of the driving experience.

If you practice off-roading on a regular basis, you've come to the right place. On the road, however, driving is still a pretty random affair and handling is, shall we say, approximate.

Several versions
The base model of the 4Runner is still the SR5, followed by the TRD Off-Road, Limited, Venture and TRD Pro versions. Each one uses a 4.0L V6 engine that dates back to the Middle Ages, but has the advantage of being virtually indestructible. That unit is mated to the last 5-speed automatic transmission still to be found on the market and standard all-wheel drive. 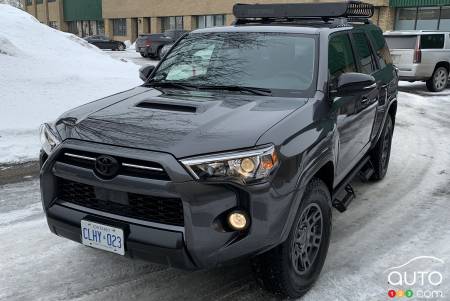 All variants are configured to accommodate five people, except the Limited, which allows for seven.  Our tester was an Off-Road version, and like in all current 4Runners, Toyota added Apple CarPlay and Android Auto applications, passive keyless entry, automatic climate control, a 4.2-inch driver information screen and two USB ports for rear passengers as standard equipment in 2020. 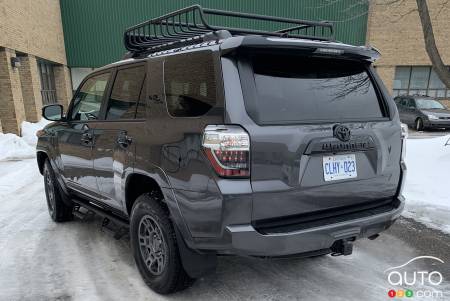 Vintage environment
Taking a seat aboard the 4Runner is a bit like going back in time to, say, the mid-90s. Space is not an issue. The layout allows generous space for 4 adults with a child in the middle back seat if needed. The driving position is quite low and the windows are very high, which impacts visibility.

Modern they’re not, but the controls are simple and easy to understand. The seats in the Off-Road edition are covered with Softex, a faux-leather you’d rate somewhere between vinyl and the real leather of the Limited version. The layout of the buttons and controls hasn't changed since the Clinton era, but the backlit displays are easy to read. A handy power-retractable rear window increases airflow into the cabin and allows you to load long objects such as a few 2x4s or skis.

Admittedly, hard plastics abound, but these are tough and will stand the test of time. The 40/20/40 split rear seats fold down to create a generous cargo area with a flat floor. An available sliding load platform pulls out for easy access to luggage. The rear seatbacks include three upper anchors. Clumsy
That’s the first word that comes to mind when you take a 4Runner for a ride. On the road, even in a straight line, you have to be vigilant and regularly correct the vehicle’s trajectory. The vehicle plunges unduly as soon as you touch the brakes and leans excessively in the slightest curve.

Vibrations in the cabin are constant and the stiffer-than-average suspension in our Off-Road version bounced at the slightest imperfection. What’s more, steering is vague and disconnected from the road.

The bus-like turning radius will give you a few headaches if you attempt to park your 4Runner in town. In tight corners, the truck reaches its limits early on. Thankfully the stability control system intervenes quickly to prevent the vehicle from shaking its booty too much. But, despite all these shortcomings, the 4Runner swallows up and spits out potholes with great ease and for that reason alone it deserves consideration.

Naturally, if you're attacking inhospitable terrain, the 4Runner is the truck to be in. Ground clearance is generous and underbody skid plates are standard.

Our specially tuned Off-Road version was just about as capable as a Jeep Wrangler. With its limited-slip differential, low-range, off-road driving modes, it’s really ready for anything.

The 4.0L V6 engine is powerful, though it’s also fuel-hungry and out-of-date. Realistically, don’t expect to do better than 14L or 15L/100 km on average. On the other hand, the 270 horses won't let you down, and the reliability of this old engine is legendary. Like many SUVs in this category, you can count on a 5,000-lb towing capacity.

Those with a nostalgic bent will smile on encountering the part-time 4WD system, which features a low-range gearbox and hill start and downhill functions. Shifting from 2WD to 4WD is still done manually with a control box as you pass through neutral before transferring – just like they did it 30 years ago. 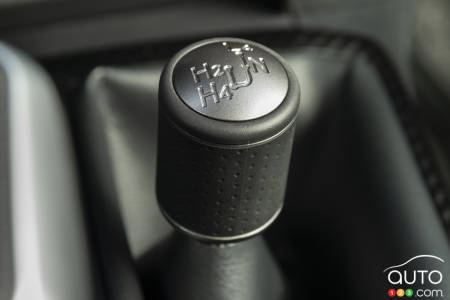 Conclusion
The Toyota 4Runner is a relic from another time, the last of the Mohicans. That's what you have to keep in mind when you buy it, but it's also what makes it so charming. This truck will be of great service if you are one of those who keep vehicles for a long, very long time.

Be warned that the 4Runner is also highly prized by car theft rings and many find themselves shipped clandestinely to Africa, where the model is prized for the little-to-no maintenance it requires. Best to protect it well and preferably keep it out of sight as much as possible. You don't want to lose your investment of more than $50,000… 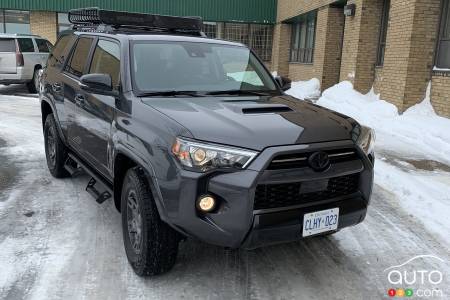 The 2021 Toyota 4Runner Trail is a very odd duck indeed in the current automotive landscape. It’s a thoroughly un-modern 4x4 frozen in time, but the 4Runner ...

Toyota Adds a TRD Sport Version to its 4Runner for 2022

Toyota is adding another variant to the 4Runner lineup for 2022, the TRD Sport. Despite its age, the model is still very popular with enthusiasts, but Toyota...