You'll have to get used to it: Ford has its sights on every category remotely to do with with “utility" at the moment. The era of Ford cars in North America is over - with the exception of the Mustang, of course. Make way for SUVs, crossovers and trucks of all kinds.

Of course, when it comes to models that respond to the wants of the thrill-seeking motorist, the Mustang remains the choice of the masses – there’s the Ford GT, but that thing is in a class of its own. The other adrenalin-packed vehicle in the Ford lineup is the F-150 Raptor, but that mastodon is aimed at a very specific audience.

That's why the automaker's decision-makers repatriated the ST badge on the Ford Edge last year and, more recently, on the Explorer ST 2020.

The difference between the only two vehicles available with the ST badge is that the former was a rapid transformation of an older vehicle, while an Explorer ST edition was part of the strategy from the very beginning of the model’s redesign. This is a new vehicle that's only just arrived on our roads.

Day and night
Does this mean that the Explorer ST is a superior vehicle to the Edge ST? The short answer is that the Explorer ST easily outperforms the other sport crossover. But is the racier Explorer the best sport SUV in its class? That's what I set out to determine with this test drive.

What's an Explorer ST?
It’s worth taking a moment to list the exclusive features of this sporty variant. To begin with, the Explorer ST gets a slightly more aggressive front end in comparison the other variants in the lineup. The black grille tattooed with the ST makes it clear this version has a more bestial side, and the message is repeated in the rear section, which features four exhaust pipes instead of two in the other trim levels.

On our tester, the optional $1,500 ST City package replaced the original rims with 21-inch black wheels. Behind these sit red disc brake calipers, an indication of the presence of an improved braking system.

Frankly, this Atlas Blue-tinted Explorer ST does not lack for visual appeal especially with its "all in the back" silhouette. It's a pity, however, that the level of build quality is not yet uniform - a defect I also noticed on the Lincoln Aviator I drove a week earlier. For a vehicle at this price, that's disappointing.

A powerful engine, but...
Speaking of Lincoln's newest SUV brings me to touch on the 3.0L twin-turbocharged V6 engine that sits under the long hood of the Explorer ST.

The more-powerful Explorer actually shares its powerplant with the Aviator, which is not yet available with the plug-in hybrid option. With 400 hp and 415 lb-ft of torque under the right foot, the turbocharged V6 of the three-row crossover is one of the most energetic in its class, surpassed only by the Dodge Durango SRT, which boasts a 6.4L HEMI V8 good for 475 hp.

To carry all that cavalry - 400 hp isn’t chump change – working in a four-wheel drive configuration, the automaker relies once again on its 10-speed automatic transmission, a unit in use all over the place in the Ford lineup.

South of the border, the crossover is available with rear-wheel drive, but in Canada, Ford has decided to market the Explorer exclusively with intelligent all-wheel drive, which prioritizes the rear axle for a sportier drive. I'll come back to this aspect of the vehicle a little later.

The Explorer ST, a utility model?
It would have been very surprising if this sportiest version of the Explorer had lost its utilitarian aspect. After all, Ford didn't invent the concept and most other “sporty” SUVs on the market retain their roominess. While the trunk space loses a little volume when the third-row seats are in place in comparison with the previous model, the number of litres available in the trunk is more generous when those seats are folded down.

It's very clear from the moment you sit down in it that the new Explorer ST has a thoroughly modern dashboard, complete with a larger (10.1-inch) central touchscreen than found in the regular Explorer. Behind the steering wheel, another screen reflects the hard work put into modernizing the SUV's interior.

Below the central screen, the main daily controls are easily accessible, while between the two passengers, the centre console offers an enclosed space for recharging a smart phone, two cup holders, the gearbox knob, in addition to another button, called "Drive Mode", which allows you to change the character of the vehicle. I must also mention the comfort of the seats in the first two rows at least.

Is the ST badge deserved?
As mentioned, the 2020 Ford Explorer ST is a much more compelling vehicle than its Edge ST counterpart. The twin-turbo V6 engine is very well matched to the SUV's chassis, and the transmission, while temperamental at times, does a good job. However, you have to take the time to choose your drive mode, as the Explorer ST offers no less than seven modes, from Eco to Sport to Off-Road.

Personally, I preferred the Normal mode, which is well-balanced for comfortable everyday driving. The Sport mode is responsible for energizing the driving experience, with a higher rating from the engine compartment, firmer steering and crisper undercarriage response. It's in this mode that the automatic transmission's "jolts" resurface, which can become annoying.

Despite the few flaws, the Ford Explorer ST 2020 deserves its ST designation, no matter how much hardcore fans of the Ford Focus ST and even the Fiesta ST may squawk. The steering is precise enough for the driver to have a little fun, the suspension is just firm enough for a corner to be tackled at speed, while the all-wheel-drive system emphasizes rear-wheel drive, a much sportier ride.

As for accelerations, let's just say they're surprisingly strong. An imposing vehicle like the Explorer ST shouldn't (in theory) be so quick to hit 0-100 km/h! But it is, and you have to be careful lest you exceed posted speed limits.

The final word
The Explorer ST is one of the most fun-to-drive models among three-row SUVs, with plenty of power under the right foot, slightly more muscular braking and a firmer suspension than usual. I like the all-wheel-drive system's insistence on prioritizing the rear end, a facet that allows for controlled skidding if you feel like it.

Of course, all this has to be done with a certain amount of skill; the Explorer ST is no featherweight and sits rather high on its 21-inch rims. The laws of physics apply to all vehicles, even performance SUVs with an ST badge! 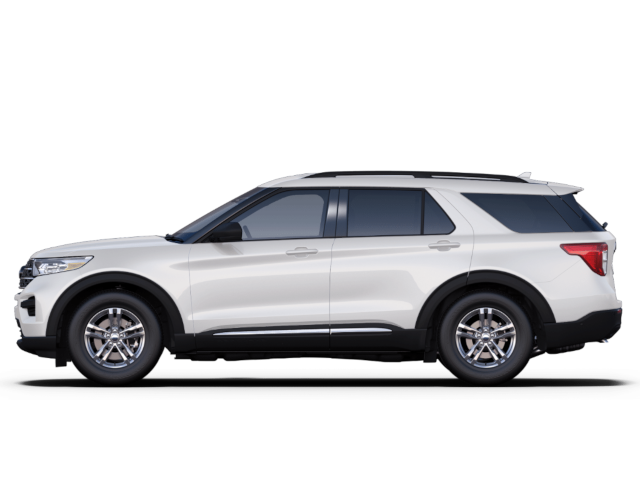 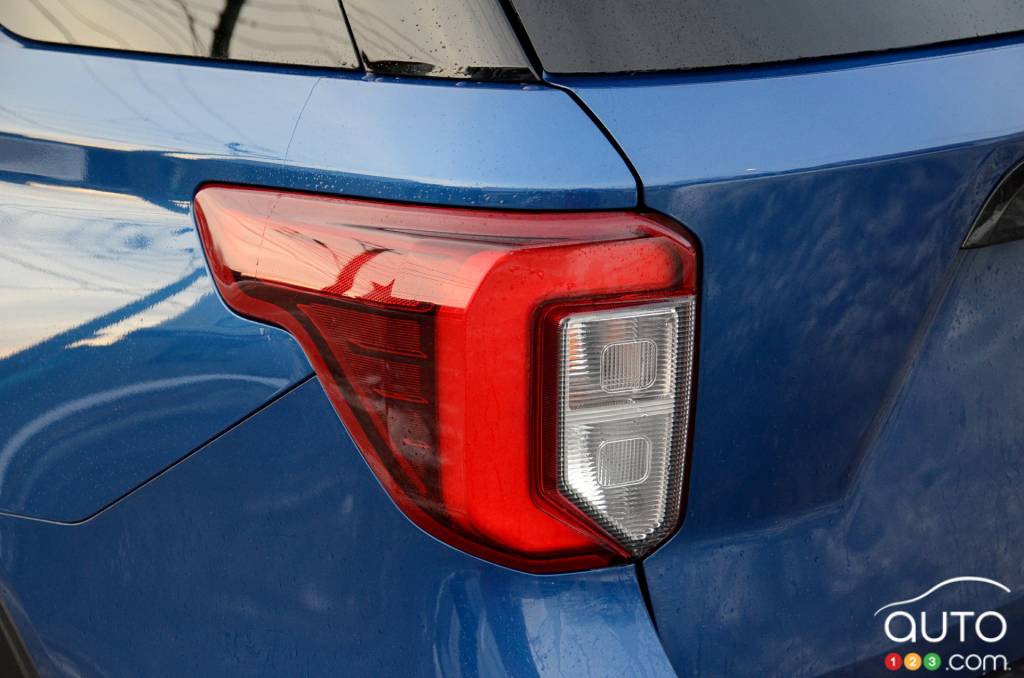 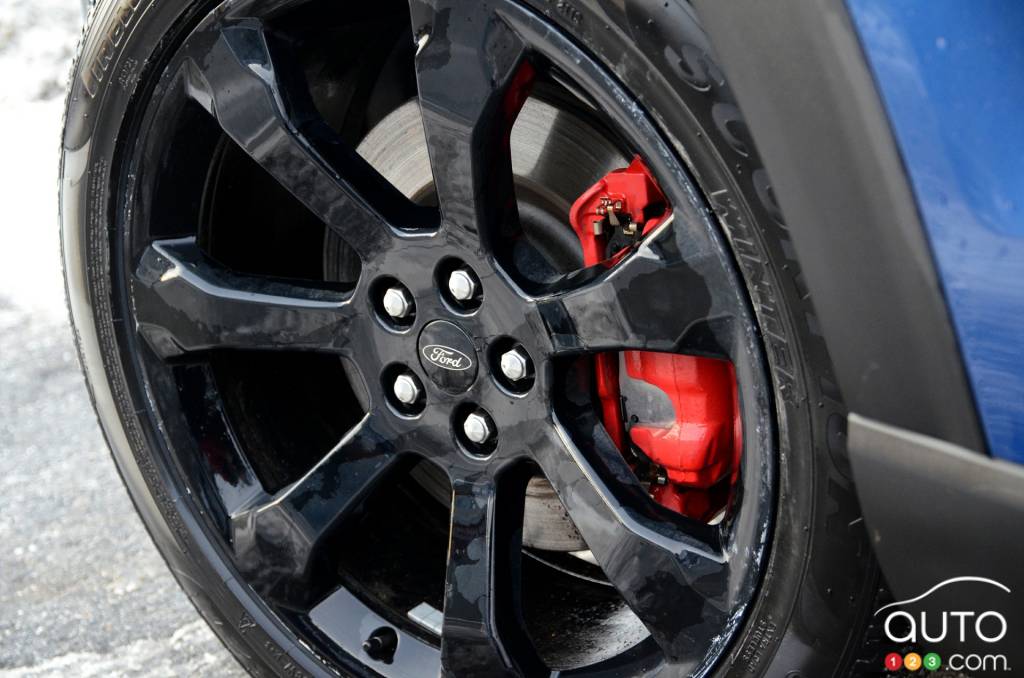 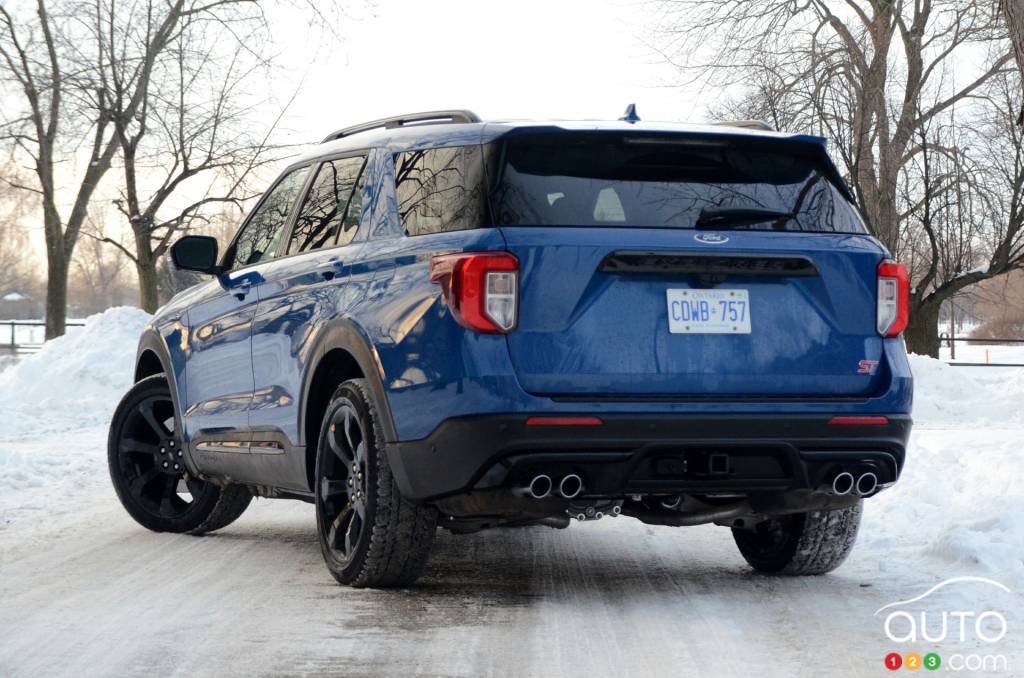 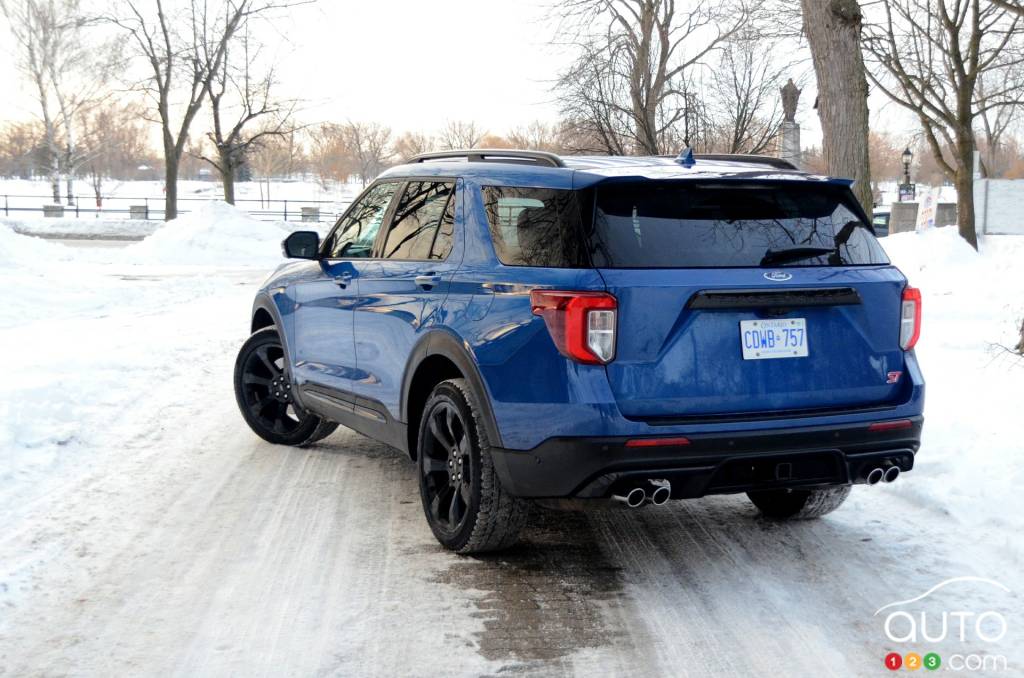 Ford is conducting two recalls prior to Christmas, impacting the Ford Explorer and Lincoln Aviator models and the Ford E-Series van. None of the issues are c...

The 2020 Ford Explorer obtained a weak score in the small-overlap crash test performed by the IIHS and misses out on the agency’s Top Safety Pick rating. Whi...