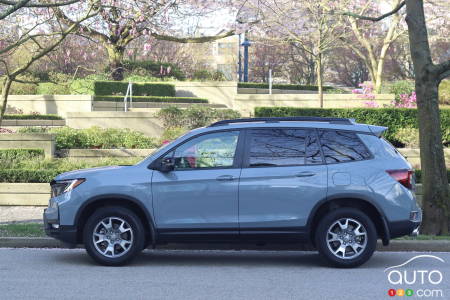 If you want to talk about mixed identities, look no further than the Honda Passport.

Here’s a vehicle that shares a platform with the Honda Pilot (plus a few other Hondas, including a pickup and a minivan), doesn’t offer as much seating (because no third row), makes the same power and isn’t actually that much smaller (it’s even bigger in some ways, in fact). Throw in the fact that its name is actually a rebirth from a time when Honda was having Isuzu build their SUVs, and you have a bit of an existential conundrum.

And we’re not done yet! This particular Passport is the Trailsport model ($49,270), which serves as a bridge between the base Sport ($45,570) and Touring ($52,170) models but gets a styling upgrade that on the surface had me thinking it may be a model unto itself as opposed to just a trim.

The reasons why that’s not the case will be apparent later on, but for now, let’s consider those stylistic upgrades for a minute. 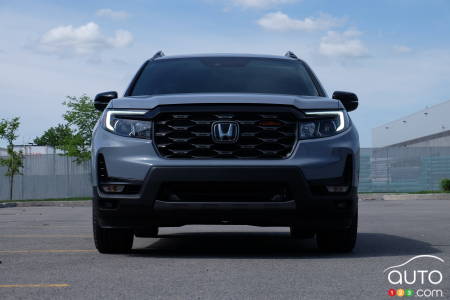 The look
From the A-pillars forward, the sheet metal is all-new with the most obvious change being the addition of a power bulge (Honda calls it “pronounced” in its literature, but I think “subtle” is more accurate), a squared-off nose with more upright grille and new front fenders.

Indeed, while there may be a power bulge, it’s actually the grille shape and a select few blacked-out trim pieces (crossbar atop the grille, front bumper side intakes) that really caught my eye, as did the newly-designed rear bumper with its big dual exhaust tips and the Sonic Grey Pearl colour. It looks similar to the shade of grey we’ve been seeing from many OEMs lately, and it does work here rather well.

There’s also some pretty eye-catching “Trailsport” badging on the grille and rear deck that I rather like. The black fender caps – required to accommodate wider front and rear tracks -- and roof rails are nice finishing touches.

It all points to the Trailsport following a trend in the industry to building more “lifestyle” vehicles, for example the Mazda CX-50 and the “OG” Subaru Crosstrek, ergo vehicles that look more robust than some of their siblings. 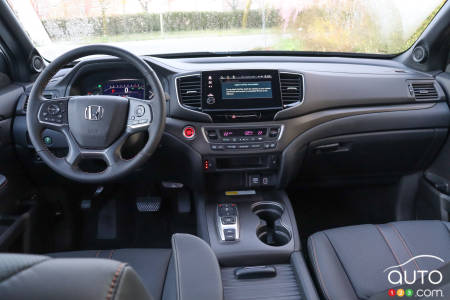 The interior
Inside, that theme is represented by orange contrast-colour stitching on the door panels, seats and steering wheel that matches those exterior badges. Which are repeated on the front headrests and floor mats, and all of that is matched by amber mood lighting available only on the Trailsport.

After that, it’s all Passport in here, which means a digital gauge cluster with big, clear graphics that I rather like, a button gear shift system I don’t like quite so much (I prefer the traditional lever, what can I say) and an 8-inch touchscreen infotainment display.

As far as current infotainment systems go, Honda’s sits about mid-pack when it comes to usability. The graphics and buttons are clear and big enough, but there are strange features that take some getting used to.

For example, at the top of the display, there’s a string of what looks like buttons – except they aren’t all buttons. Some serve as hot keys linked to other menus, but others are just there to tell you what your current audio source is, etc. The trip computer is also a little tough to navigate – most of it is accessed via the infotainment display, as opposed to the in-gauge trip computer – and even after driving the many Hondas and Acuras I have, it still annoys me and is a big reason why I stuck with Apple CarPlay for pretty much the duration of my test.

Otherwise, the interior is a very well-fastened and quality affair. The materials are top-notch – in some cases more fit for an Acura – and the driver’s seating position is comfortable with the legroom and headroom required even for taller drivers like myself. Controls are all well within reach and if some of the materials seem luxury SUV-spec, the chunky steering wheel seems like something from a luxury sports sedan. 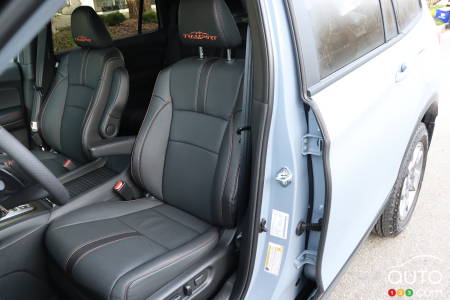