Dearborn-based automaker Ford is now well into the thick of its strategy to stick with an all-truck-all-SUV-all-the-time lineup in North America. But while both the Ford and Lincoln brands have unveiled a few new models in the last year or so, the highly anticipated models have only just arrived in showrooms. This is the case of the Ford Mustang Mach-E and the Bronco Sport, the smaller and slightly less-rugged sibling to the actual Bronco, which scheduled to arrive this summer.

The new model serves as a bit of a shock to the system of the compact SUV category, where Ford was already present with the Escape (date of inception: 2001). Ironically, some will remember the first generation of the Escape had a more assertive stance than the model introduced in 2013. The circle of life, as they say.

With the addition of the 2021 Bronco Sport, Ford wants to double its chances of appealing to the compact SUV crowd, with the Escape continuing its journey against other well-known models and the Bronco Sport looking to attract a more "adventurous" clientele.

Ready for adventure
The Badlands variant that served as my tester sits at the top of the model range, and is the best equipped to withstand driving on rough terrain. Let’s be clear, the Bronco Sport is not an equal of the Bronco, but it can stick with it for quite a way before it concedes anything to its bigger brother.

The Badlands version also comes with a great look. Up front, the grille points directly to the first Ford Bronco of the 1960s, as does the vehicle's verticality. It’s just a lot more modern, is all. Even in the rear, the Bronco Sport stands straight to attention.

The two-tiered roof is another distinguishing feature of the SUV, and it serves to improves the comfort of second-row passengers. The roof rails are also a nice touch and complete the silhouette of the pocket-sized SUV. Oh, and the thick sidewall tires also add to the "off-road" character of the model, although it would be surprising if owners of this vehicle were to engage in pure off-road driving to the extent that owners of Jeep Wranglers and Toyota 4Runners do.

The "big" engine for the Badlands
For those who don't already know, the Bronco Sport shares several mechanical components with the Escape, including the platform and even the powertrains. Where the Bronco Sport differs from its more urban counterpart is in its off-road capabilities, which I'll get to later.

Under the hood, however, the Bronco Sport Badlands shares its 2.0L turbocharged 4-cylinder engine with the more-upscale Escape offerings. Output from this unit checks in at 250 hp and 277 lb-ft torque, figures that are more than enough to move an SUV that is by the way as aerodynamic as a refrigerator. The only transmission available is an 8-speed automatic, the same unit that's already found on many Ford products. It didn't exhibit to me any signs of trouble, except for one or two "jerks" during sustained acceleration.

It will be interesting to test the other three Bronco Sport versions that are only available with the 1.5L EcoBoost 3-cylinder engine. Let's just say that expectations are lower with the "smaller" engine.

A thoughtful interior
If you're going to go on an adventure, you need a vehicle that can overcome obstacles, but don't forget the utility aspect. The Bronco Sport is definitely well-conceived in this regard, especially in the Badlands iteration. It comes, for example, with a plastic-coated floor to facilitate washing out the bits of the outdoors you brought home with you.

There's also an impressive amount of innovatively designed storage space, like the hiding place on the right side of the back seat or these pockets behind the first-row seats, not to mention the straps sewn into the back of those front seats. Because this is 2021 and any good vehicle is well-connected, two pockets are cut into the sides of the front seats to hold your smart device. My Bronco Badlands came with inductive charging included; it’s found not far from the knob that acts as a gearshift.

In the trunk is a utility tray that can be folded in several ways depending on the needs of the moment, plus you’ll find hooks and power outlets in the cargo area. And let's not forget the retractable rear window, which is reminiscent of the very first Ford Escape. Want more? The Bronco Sport's designers integrated adjustable LED headlights into the tailgate walls - a nice touch for evenings spent sitting in the trunk.

The dashboard, meanwhile, also houses a tablet-format centre touchscreen where you go to use the SYNC 3 infotainment system, compatible with Apple CarPlay and Android Auto apps.

At the wheel
Once on the road, it’s quickly apparent that the Bronco Sport offers a suspension that's a tad stiffer than does a crossover intended for primarily urban use - not that the SUV is as uncomfortable to drive as a Jeep Wrangler Rubicon, far from it. In any case, the seats are soft enough to get you to your destination without getting too sore about it.

I should also mention that the interior environment is very friendly to taller passengers, even in the second row, thanks to the high roof.

At the risk of repeating myself, the powertrain is ideal for the vehicle's purpose. It’s never out of breath, even during dynamic during acceleration, and especially in SPORT mode, which sharpens the handling of this pocket Bronco. The ECO and NORMAL modes are, as you might expect, less explosive. The other modes (SAND, SLIP, ROCK and MUD/ORDER) are wonderfully self-explanatory, and were designed for a little more aggressive driving.

Unfortunately, during the week I test-drove the vehicle, what snow had been on the ground was on its way down sewer drains and into the earth, which made me scale back my plans to take the Bronco Sport out on a truly trying itinerary. Instead I settled for a gravel road with patches of ice to test the Slippery and/or Sandy modes. In the event, the Bronco Sport made short work of this less-demanding surface.

What I retain from this first contact is that this SUV is really not bad to drive. The engine is largely sufficient, the chassis is rigid and the steering isn’t too numb either.

The final word
The 2021 Ford Bronco Sport Badlands isn't exactly the definition of the affordable SUV with its base price of $40,199 ($45,549 in this case), but for those who can afford it, the scaled-down sibling of the Bronco has almost all the tools to go on a real adventure, and has a deserved turn in the sun while we await the Bronco later this summer. So here’s a test for you: if you consider yourself a strictly big Bronco guy or gal, ask yourself if you'll really use it much away from the pavement. The Bronco Sport Badlands might be enough for your needs.

Quality of construction still could be improved
High fuel consumption (over 11.0L/100 km)
The price! 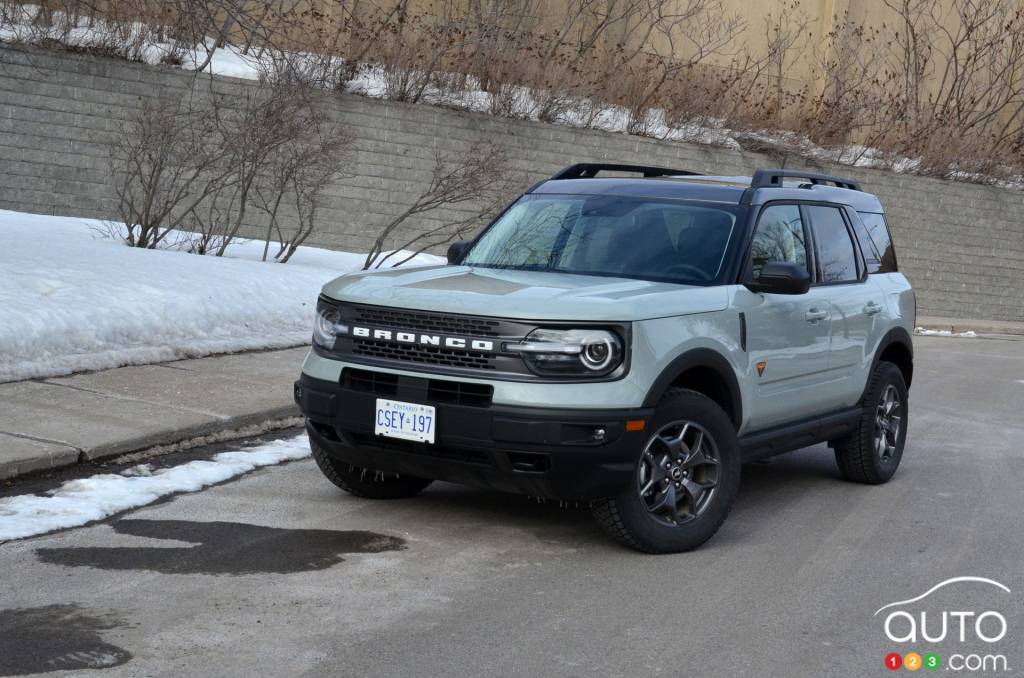 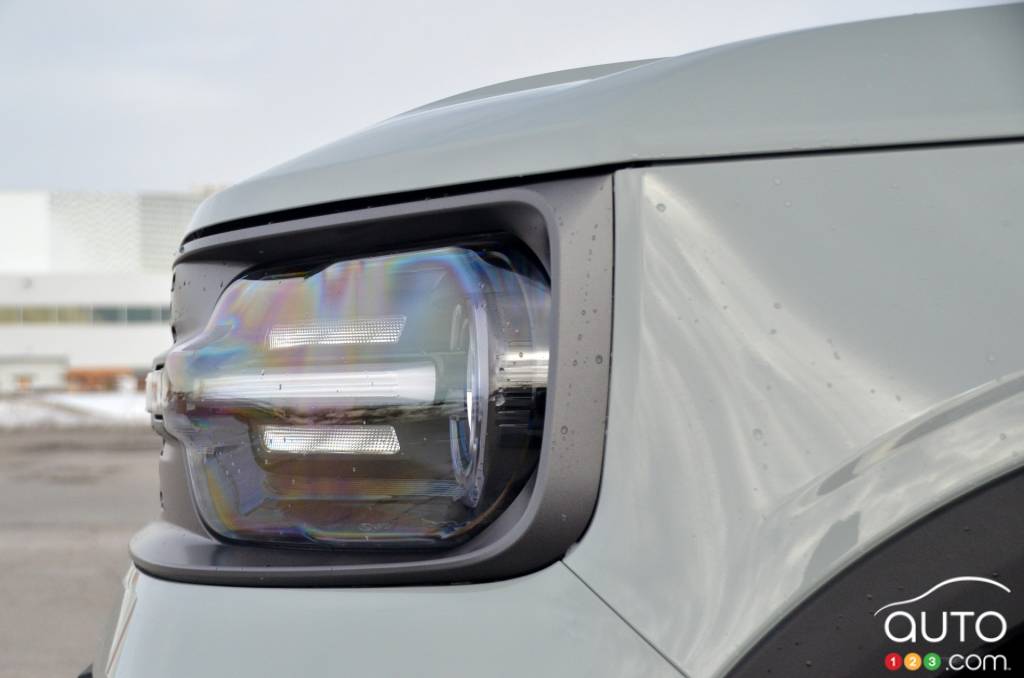 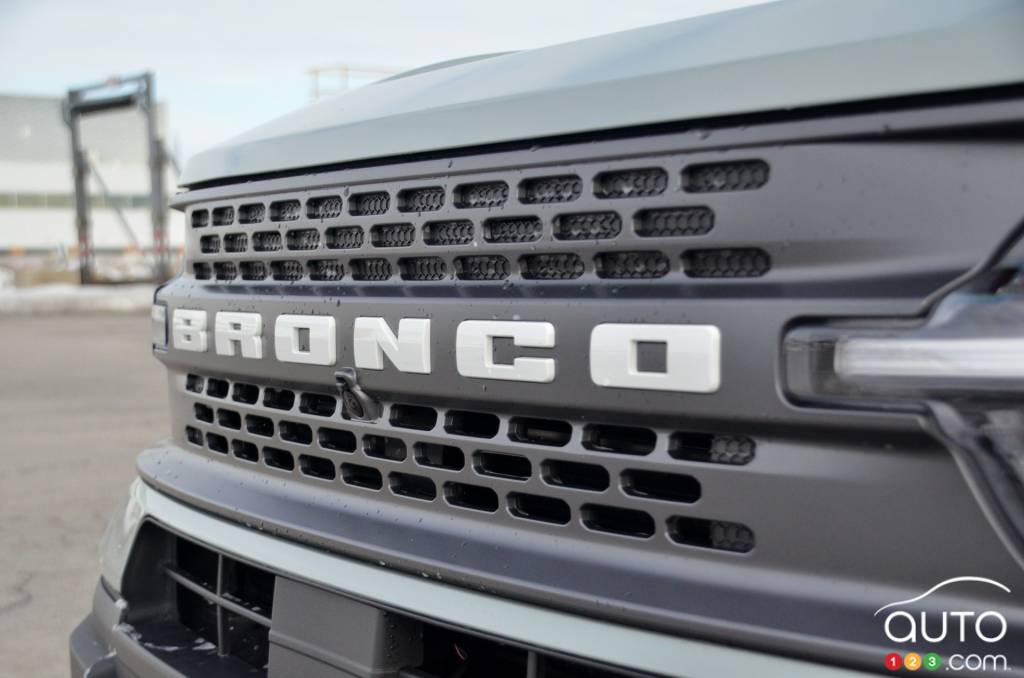 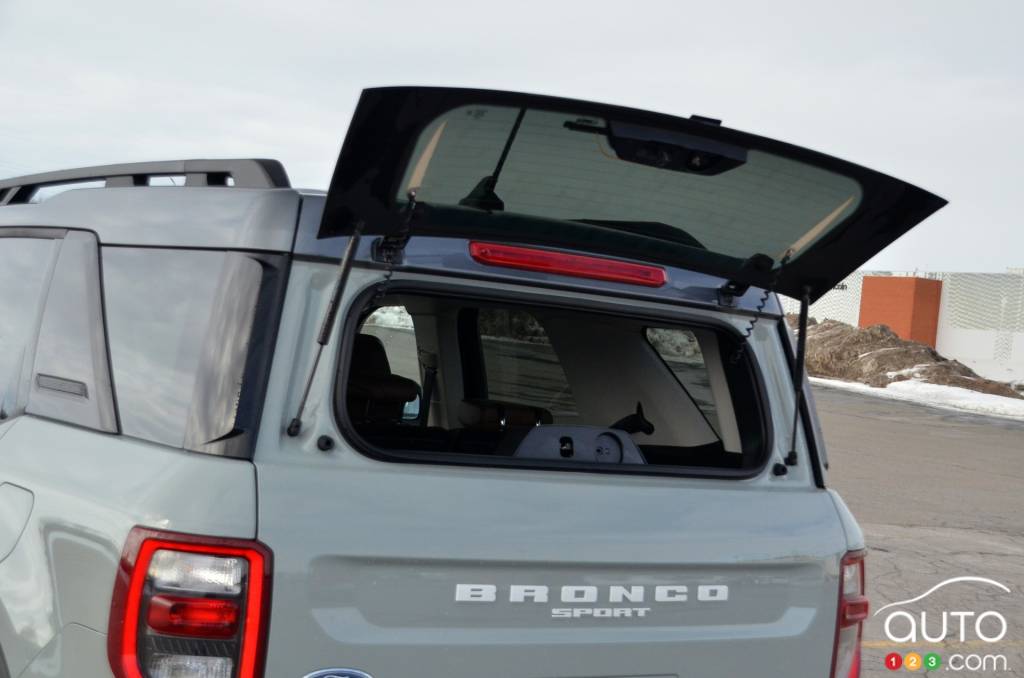 Another Recall for the Ford Bronco Sport

Ford is issuing another recall for its Bronco Sport, the fifth in less than a year. This time, the problem affects the sunroof on some models; the parts in q...

A First Recall for the Ford Bronco Sport

Ford is recalling its newest model, the Bronco Sport. Some units may have left the factory with loose or missing rear suspension bolts.

Our first encounter with the 2021 Ford Bronco Sport provides a glimpse of some interesting things, but we hear a few false notes. This is particularly the ca...