Auto123 gets in a first drive of the 2022 Volkswagen Golf GTI and Golf R, a perfect excuse for a new edition of a comparative review of the two models. Are you more Golf GTI or Golf R?

Niagara-on-the-Lake, ON - Three years ago, I published on this site a comparative review of the iconic VW Golf variants and posed a simple question: are you more Golf GTI or Golf R? Three years later, I couldn't help but reopen the debate on the occasion of my first contact with the new 2022 model.

But, unlike that first test drive back in February 2019, as part of which the two Golfs faced off on a frozen lake in the beautiful Lanaudière region of Quebec, this rematch took place on dry ground, with the cars even wearing summer tires, an option on the GTI’s Performance variant that might interest closed-course driving enthusiasts, by the way. The Golf R, on the other hand, comes standard with these stickier tires.

And to top it off, Mother Nature was in an amiable mood as we set out to test drive the two compact sports cars – conditions were unreasonably favourable conditions for mid-November. Even better, this first contact in southern Ontario allowed me to discover the four versions of the only two Golfs still in service on our continent, each of them available with two or three pedals.

The most mature Golf ever?
Let's get one thing straight right away: the outgoing seventh-generation Volkswagen Golf, which first debuted here in 2014 as a 2015 model, was already a benchmark in the compact car segment for its all-around quality, comfort level and even overall performance. All that went for the model’s two sports cars, the GTI and the R. It was without a doubt, on its merits, the most successful Golf in history.

For 2022, the Golf (and all its variants) is no longer a part of the North American lineup, which now consists only of the brand's iconic Golf GTI and its AWD counterpart, the Golf R. The latter has already been around for 20 years, taking into account the R32 deliveries marketed in the U.S. prior to the name change in 2010. So no more “regular” Golf! Volkswagen’s response those boo-hissing the move by pointing to the Jetta and Taos as noble alternatives.

Volkswagen's badge of honour as the instigator of the compact sports car movement is once again put to the test, especially since the many loyal fans of the Golf are adamant that these two vitamin-packed Golfs should not lose their unique character.

On the surface, the two Golfs don't change much in terms of their basic formula - meaning the GTI remains a nimble two-wheel drive sports car, while the Golf R adds 4Motion and a version powered by the same turbocharged 4-cylinder as the GTI.

But there's a little more than just that behind the practical but sporty outer shell. For instance, there’s the integration of an almost entirely touch-sensitive dashboard, for example. Or the addition of devices designed to improve the vehicle's performance, such as the Vehicle Dynamics Management system, which, like an orchestra conductor, manages several of the car's parameters, including the self-locking differential, the electronic stability control, and the rebound of the adaptive dampers on the Performance model, all to align with the actions of the person behind the wheel.

This small, innocuous technological detail is also present in the more-powerful Golf R. The engineers even went so far as to add three modes to the existing ones: Race, Drift and Special (which even features a drawing of the famous Nürburgring circuit.

New look: which one to choose?
Compared to its predecessors, the design of the new GTI is actually a little daring. The prominent grille now featuring at the front is nothing like the classic approach of the last two generations. From a personal point of view, I find the GTI more original compared to the Golf R's more sober bumper, which is probably due to the absence of fog lights in the area. The GTI retains its red stripe and G-T-I badge, while the rear end is more restrained.

Indeed, with the redesigned headlights (reminiscent of those of the brand's SUVs) and the version's crest lodged in the middle of the tailgate under the VW, regulars will find new touches but won't be too disoriented. Even the layout of the exhaust pipes hasn't changed drastically, despite the more-muscular pipes. The GTI has two mufflers, while the R has two twin mufflers, so four pipes. The Golf R's spoiler is larger than the GTI's too.

The Golf R also gets blue accents all over the exterior (front bumper, brake calipers, seat backs, etc.), as opposed to the red theme in the GTI. In this regard, users can play endlessly with the ambient colours offered in the touchscreen.

The interior is also a factor in making the difficult choice between a GTI and an R. Both versions obviously share the Golf VIII's interior with its redesigned dashboard. The ventilation nozzles have been repositioned lower in order to place the central touchscreen a little higher, as have those touchscreen buttons at its base.

The finishes differ between the two Golf variants, but the essence is the same. The Golf GTI also offers cloth seats with the famous checkered pattern, plus leather upholstery on the Performance trim. That leather can be ordered with the less-expensive trims at no extra cost.

Three versions versus one
Where the choice may be a little easier is in how your choice will affects your bank account! A base 2022 Golf GTI with manual transmission commands a price of $31,495. The DSG transmission bumps the bill to $32,895, and you can order a sunroof and 18-inch wheels (instead of 17-inch wheels) for $1,350.

The Autobahn edition of the GTI is more expensive at $34,995 ($36,395 with optional DSG) and can also come with a sunroof and 19-inch wheels wrapped in high-performance summer tires and even a Harman-Kardon audio system for $1,800.

The Golf R, on the other hand, is only available in one version at $44,995 with the manual transmission or $46,395 with the DSG, and the only option is the panoramic sunroof for $1,250. Note also that the best performing Golf is available in only three colours, compared to five for the base GTI and eight for the two higher-end models. 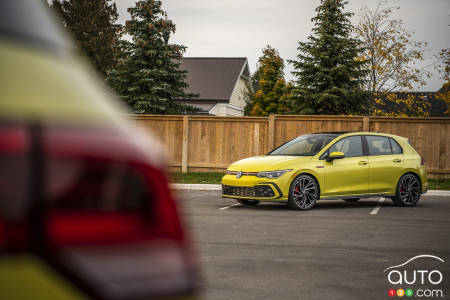 Admittedly, the monetary difference between a GTI Performance with DSG and a Golf R with a manual transmission is not that great, and this is perhaps where consumers will hesitate. The buyer who selects a base GTI with manual is probably not interested in paying the extra $15,000 to upgrade to the R level, but for the GTI Performance, the decision is more difficult in my opinion.

One engine, two transmissions and three power levels - which one to choose?
Here, it's a little less complicated. The two available gearboxes are well known. The consumer caught in heavy traffic on a daily basis may be tempted to check the DSG option, but the purist wants to handle a stick.

The question then is whether the all-wheel drive is really necessary. It's true that when it comes to tackling a snowstorm, the Golf R leaves the GTI far behind, but when the roads are dry, the traction advantage isn't as obvious. Unless the Golf R's new "Drift" mode is the detail that tips the buyer toward it.

There is a difference in power between the two cars. The GTI gains a few horses this year with 241 hp and 273 lb-ft of torque. The Golf R, on the other hand, is also more energetic with 315 hp and 280 lb-ft of torque (manual transmission) or 295 lb-ft (DSG transmission).

Frankly, the GTI's engine is more than enough to satisfy the performance enthusiast. In fact, to put into perspective just how much the GTI has evolved over the decades, the 241 hp of the GTI is identical to the 240 hp of the 2004 VR6-powered Golf R32.

On the road
The undecided consumer owes it to themselves to put both versions of the Golf to the test. The Golf R is a complete car, well-adapted to the particularities of our climate, but the GTI can get by just fine even when the cold season sets in.

For my part, I have to admit, I tend to go for the GTI, first for its more attractive price, but second because it's still competent in all facets of front-wheel drive, and third because I prefer the sound of the engine. The Golf R's is far from gimpy, but I have a soft spot for the GTI’s tones, which are less sharp than the R's at high RPM.

Both gearboxes are identical, whether in the GTI or the Golf R; you have to choose auto or stick either way. Whether you're an old-school driver or one who’s just as happy to do without the third pedal, rest assured that both provide amazing driving pleasure for a compact car as practical as this Golf.

Acceleration is very impressive in the GTI, and a little more so in the R. The sporty steering wheel is very comfortable to hold and the first-row seats are supportive enough to keep occupants in place as they take spirited turns. Braking is more aggressive in the R, which has to deal with extra weight, but don't think that the GTI is a slouch in this regard. 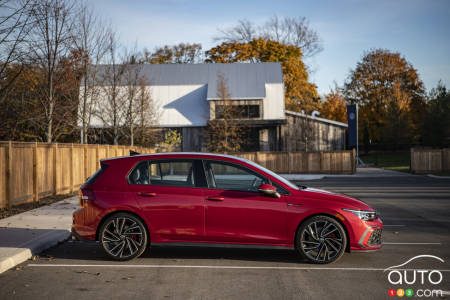 The last word
Having to choose between these two versions of the Volkswagen Golf is as difficult as having to choose between your favourite sports team's jersey and your favourite sports team's limited jersey. Both give you pleasure and pride, but one has a "je-ne-sais-quoi" that the other does not. The Golf R is a formidable machine tailored to Canada, but the Golf GTI is (almost) as formidable! The good news for interested buyers is that either way, you get choices: Volkswagen offers several versions of the GTI... and two of the other!

The cancellation of the regular Golf, even though the Jetta and the Taos
The tactile nature of the dash (it takes some getting used to)
The slightly-too-square knob on the manual transmission lever 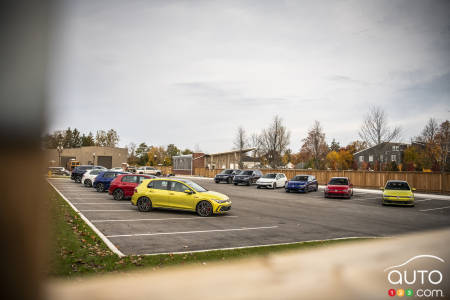 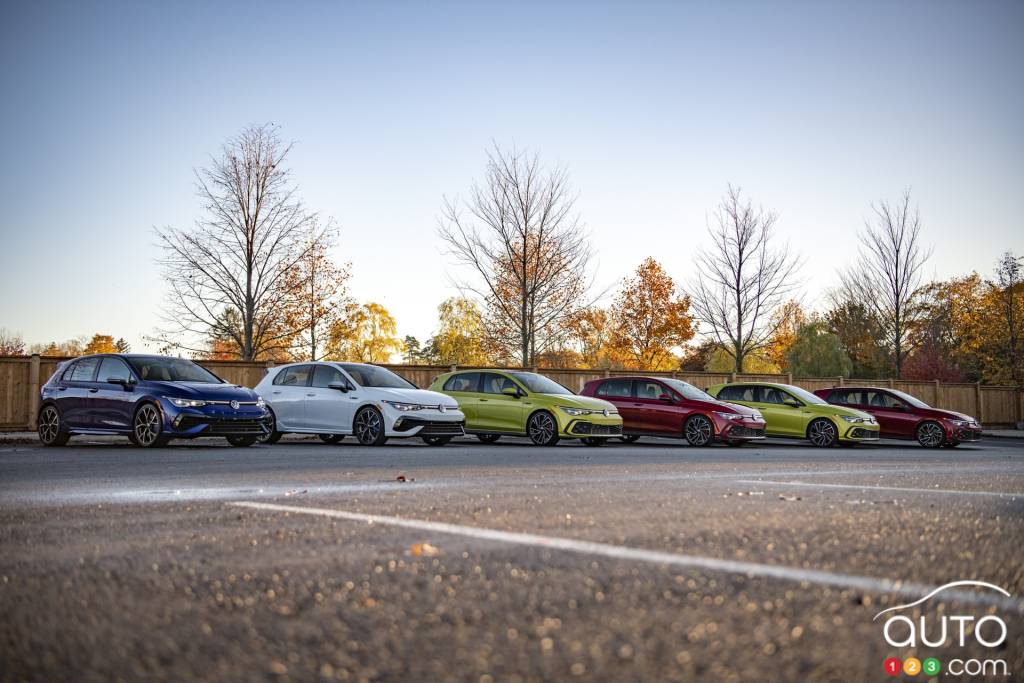 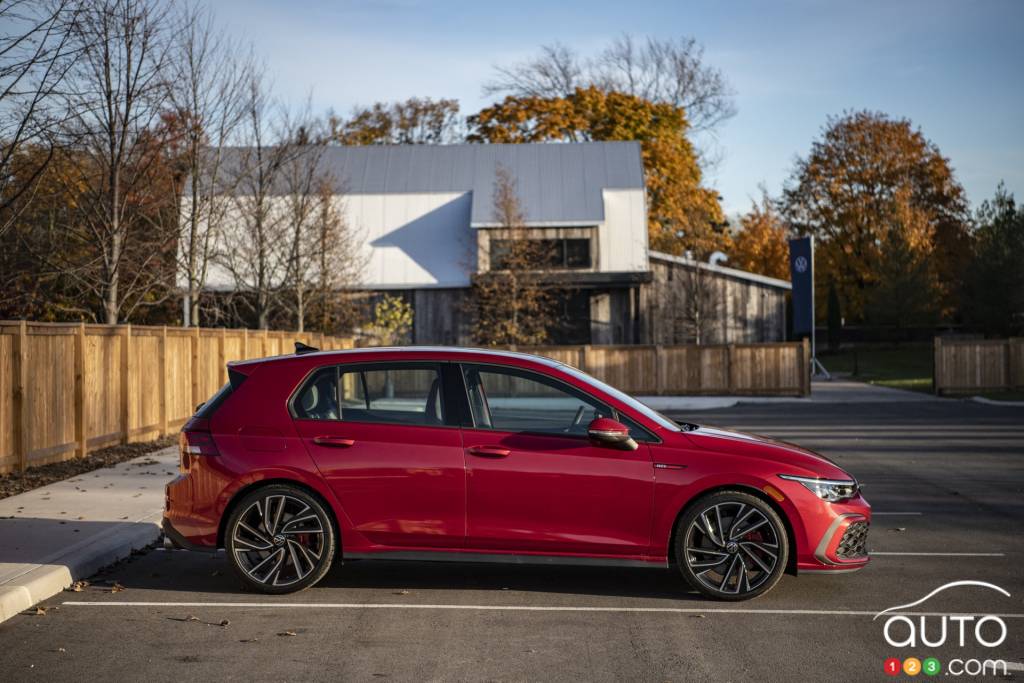 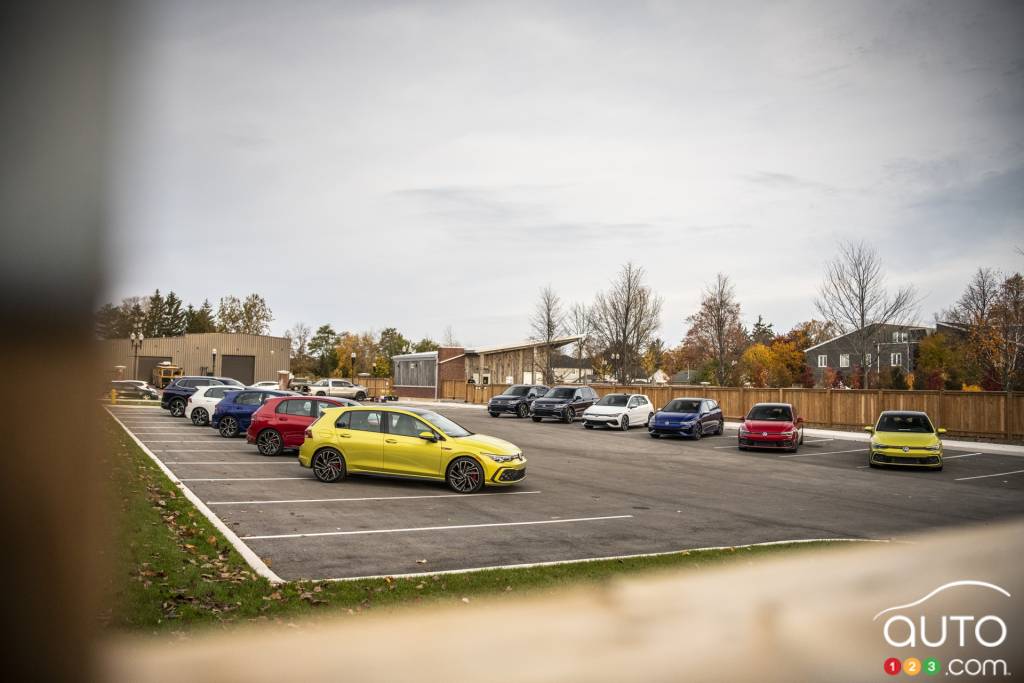 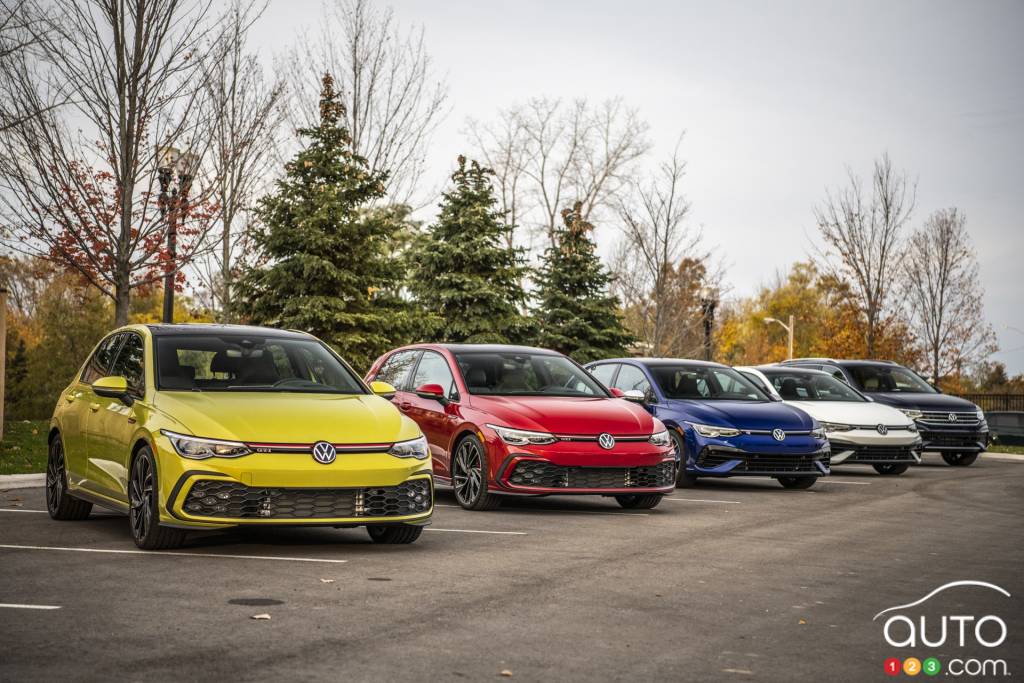 2022 Volkswagen Golf GTI and Golf R Pricing and Details A...

Volkswagen Canada has released pricing and details for the only two Golf models that will be offered in North America for the eighth generation of the model,...

Volkswagen Killing the Golf Base Version in U.S.

Volkswagen appear set to kill off the regular Golf and the Sportwagen version in the U.S. when it renews the model next year. The company is responding to we...