Throughout much of their existence, Subaru's Impreza and WRX models have been extremely close siblings. But those days are over. In fact, the 2017 redesign of the former made that it's now based on a different platform than the latter, which was last updated back in 2015.

And this family estrangement is bound to grow, as Subaru has already signaled its intention to see the two models each benefit from their own image. And it will be even more striking when the next-generation WRX and its flashier version, the WRX STI, launch sometime in 2022.

In the meantime, there are still some similarities between the models, as the separation papers have not been formally signed - so to speak. We take a look at those, as well as at the ever-growing differences between the two, which have created diverging experiences for those driving them.

Family traits
Aesthetically, it’s still easy to confuse the models, because apart from their shared format, there are several similarities in the fascia, whether it’s the height of the headlights, the size of the grille or the spaces reserved for the fog lights. However, the differences are notable enough than on sight, it’s clear we’re dealing with two different creatures with different personalities.

And it starts, obviously enough, with the air intake on the hood ofthe WRX. Completely functional, that element is there to fill the WRX's turbo engine with oxygen. At the back, the big tell is the rear spoiler on that revved-up version.

On board, you can see the evolution of the interior layout from the previous-generation Impreza (and WRX) to the current model. One feature that’s been carried over, and is thus found on both the current Impreza and WRX, is the upper part integrated into the dashboard, which serves as a complement to the centre console. That console includes a small data display screen that provides the driver with information on a host of features, including fuel consumption and all-wheel drive configuration. 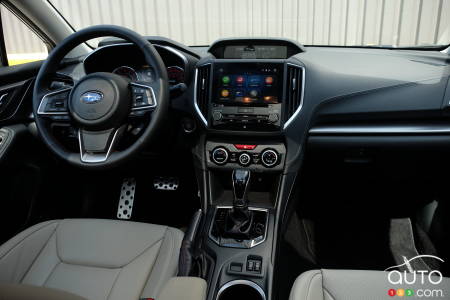 The multimedia systems, for their part, are the same as before. While their user-friendliness is undeniable, so is their dodgy reliability. During my last three tests of a Subaru product, I had problems. Once, the sound system decided to take a 24-hour break. Another time, the system switched constantly between audio sources (FM, Bluetooth, Sirius XM), as if some virtual button was stuck, without me having pushed or touched anything. The problem arose several times during my week of testing.

This is something potential buyers should keep in mind. Subaru's response when I raised the issue? "We’re aware of it”. Okay, good. That's a start.

The differences
These are more numerous, and growing in number every year. Let's go with the most obvious one, which is the mechanics called on to power the cars. With the Impreza, you get a naturally aspirated 2.0L 4-cylinder engine with 152 hp and 145 lb-ft of torque. A five-speed manual transmission (yes, it still exists), as well as a continuously variable transmission (CVT), can be associated with it.

The WRX exists on a slightly different plane, let’s say. There's also a 2.0L 4-cylinder engine under the hood, but it's turbocharged and delivers 268 hp and 258 lb-ft of torque. A six-speed manual gearbox is available, as well as a CVT.

The presence of that latter unit in the WRX product offering is nonsense, of course. What’s the thinking behind producing a car designed to give pleasure, only to equip it with a gearbox that’s the equivalent of thinking of rotting vegetables during sex? If you opt for this car, go for the mechanical gearbox - please!

As for the WRX’s performance, as you may have guessed, it is fundamentally different. While the Impreza offers what’s needed for everyday moving about, the WRX bestows that little extra to deliver a much more dynamic drive. That said, the chassis of the staider model is plenty sturdy, and handling remains solid and reassuring. The second one has a stiffer feel to it, no question. The adrenaline is there, too. In fact, drive the two models one after the other and, strictly on its merits as a driving machine, the WRX will be hard to resist.

And what the more powerful variant, the WRX STI? It’s a bit out there on the ledge, in my humble opinion. Not so much because of its power (310 hp and 290 lb-ft of torque are good but not extreme), but because it’s constitutes wasted potential given Canadian roads and speed limits. What's the point of having in your hands a model that can streak from 0-100 km/h in under 5 seconds? And that's without considering the fact that occupants get so enthusiastically bumped around in the cabin it can become a real problem. Unless you're 20 years old...

Conclusion
Despite their similarities and the fact they’re creatures made by the same manufacturer (and occupy the same niche, vehicle type- and dimensions-wise), the differences between the Impreza and WRX models are more significant than the similarities. The visual indicators tell you you’re in sort of the same car, but behind the wheel, the personalities of the two models are diametrically opposed.

Probably as much as their buyers'. 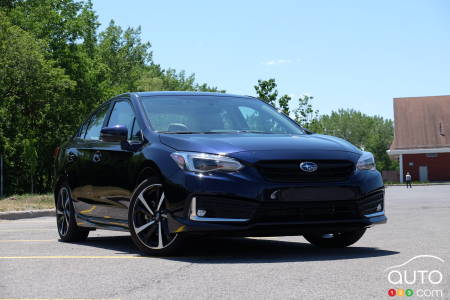 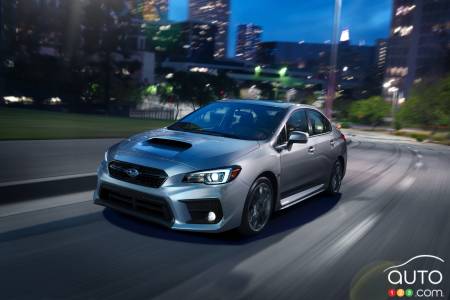 Winter? Bring it on! Once again Auto123.com brings you our updated ranking of the Top 10 most affordable all-wheel-drive vehicles sold in Canada in 2020.