It’s confirmed, the 2023 Chevrolet Corvette Z06 will act as the lead car for the Indianapolis 500, the premier event of the IndyCar Series and frankly one of the most famous auto races run on the planet.

The version that will be used won’t be an ordinary Z06, but a special 70th anniversary edition. The model was announced in January and marks the 70th year since the iconic Corvette’s introduction on the market in January 1953.

Those who want to see the model in action, can tune in on Sunday, May 29 at the famed Indianapolis oval. Former series driver Sarah Fisher, who has done this before, will have the honour of driving the Z06.

Fisher will actually be one of the first people not associated with General Motors to drive the new Z06. Powered by a 5.5L flat-shaft V8 engine, similar to the engine in the C8.R endurance car, the Z06 is rated at 670 hp (at 8,400 RPM) and 460 lb-ft of torque (6,300 RPM). It generates its maximum power through engine speed, not forced induction. The sound of the model is unique, though on the day it will probably be buried by the noise of the 33 cars set to line up behind it. 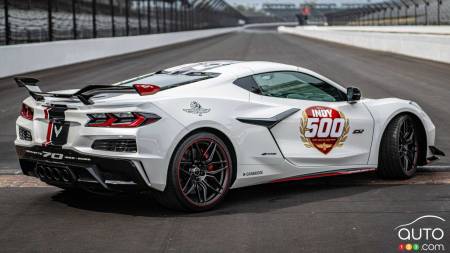 The only transmission offered is an 8-speed dual-clutch automatic, and power is obviously sent to the rear wheels. Performance figures have not yet been released, but a 0-60 mph time of under 3 seconds is expected.

Pricing details are pending. The model is expected to debut before the end of this year. For enthusiasts, the Indy 500 will be the first real opportunity to see this version in action.

The latest appearance of the Corvette as pace car of an Indianapolis 500 event just further enriches the association the model has always had with racing. In fact, no other vehicle has occupied the role of pace car as often as the Corvette - this will be the 19th time in its 70-year history. Which is even more impressive given that it took 25 years for the model to be invited to do so the first time, in 1978.

As for Chevrolet, this will be a 33rd pace-car appearance. Incredibly, if we go back far enough in time, we find that the Chevrolet brothers (Louis, Arthur and Gaston) were drivers in the first races of the event. Even better, Gaston Chevrolet won the Indianapolis 500 in 1920. 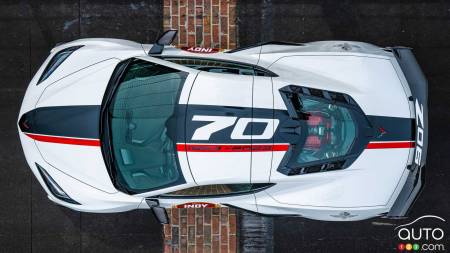 Photo: Chevrolet
The Chevrolet Corvette Z06, from above 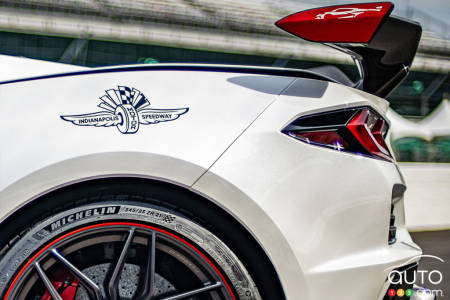 Chevrolet has unveiled the Z06 version of its new Corvette. With an estimated 670 horsepower and an engine that can sing at up to 8,600 RPM, we're promised t...

Chevrolet Shows a First Official Image of the 2023 Corvet...

Chevrolet has just shared the first official image of the upcoming Z06 version of its Corvette. The model’s differences is more discreet than expected, but l...