The arrival of the Corvette ZR1 is in development, and when it debuts it will represent another super-powered entry in the lineup after the highly anticipated Z06 variant of the Chevy “supercar”. According to Muscle Cars & Trucks website, which claims it heard from “reliable sources”, the ZR1 will offer 850 hp.

Reports have the version receiving a twin-turbo variant of the 5.5L V8 engine of the Z06 variant, which is good for 670 hp in that model. The addition of the turbos will push the insanity to level 850. The only transmission offered would be the 8-speed dual-clutch unit that already comes with the base model.

The ZR1 version of the Chevrolet Corvette will, as you’d expect, get even more aggressive styling. Among other things, we can expect centre tailpipes for the exhaust, which always adds to the look of a model. The wheels will have a unique design and Michelin Pilot Sport 4S tires will be standard. A performance package will allow for replacing those with Michelin Pilot Sport Cup 2R rubber.

A performance package on an already performance-oriented model is always amusing to us, but anyways...

According to Muscle Cars & Trucks, the ZR1 version will debut in 2025 or 2026, which is still a long way off. And with all the delays we're experiencing throughout the industry, pretty much anything could happen to that schedule. 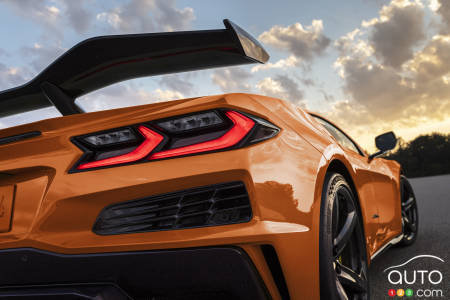 One thing we know is that we'll have the Z06 version well before then, as well as the hybrid version that will evidently be called E-Ray. That iteration of the Corvette will use the 6.2L V8 of the regular version, but with an electric motor would be added for more power, as well as a front-wheel drive system to support the one already present in the back. It’s expected the first all-wheel drive Corvette will offer between 600 and 650 hp.

As for the all-electric version, we'll have to wait and see when it hits the market. We can guess that it will be one of the electric models promised for 2025 by General Motors.

Lest we forget, we could also see an even more powerful Corvette. The Zora would marry the ZR1's engine with the E-Ray's hybrid powertrain, the two combining for a capacity of more than 1000 hp. Again, we're talking 2025.

The Corvette range is set to grow quite a bit in the coming years, safe to say.

A little history lesson is in order regarding the Zora name. It refers to Zora Arkus-Duntov, an engineer who joined Chevrolet soon after seeing the Corvette introduced in 1953. He was subsequently at the heart of the model’s evolution, including its turn toward sportiness and performance. Although he did not create the Corvette, he is often referred to as the “father of the Corvette” because of his importance in its history.

It's a nice gesture to pay tribute to him by affixing his name on an ultra-high-performance version.

Hot on the heels of the new 2019 Corvette ZR1, Chevrolet introduced the ZR1 Convertible—the first ZR1 drop-top since the original 1970 model—today at the 201...