How does the new 2021 Ram 1500 TRX compare to the Ford F-150 SVT Raptor, instigator of the arms race in this very, very profitable sub-category for car manufacturers? We size up the two monsters.

The comparison is inevitable: Once the 2021 Ram 1500 TRX was revealed this past week, all off-road truck enthusiasts wanted to know was how the new player measures up to the instigator of the sub-category, the Ford F-150 SVT Raptor, the one that turned everything upside down in 2010 with its enlarged body, unique suspension and unmatched off-road capabilities.

If you're wondering why there's been such an explosion of "rugged"-looking vehicles, it's largely because of the Raptor. For the past 10 years, special versions of pickup trucks have been multiplying like big monstrous rabbits. Think of the Chevrolet Colorado ZR2, Ram 1500 Rebel, Toyota's TRD Pro line, GMC's AT4 line, not to mention the Jeep Gladiator, which entered the mid-size pickup truck niche last year.

And yet, the F-150 Raptor lacked a direct rival. Now, I have to say that at first glance, FCA has gone the distance with its latest 4x4 toy. Not only does the supercharged V8 powertrain of FCA's new monster eclipse Ford's twin-turbo V6, but other details in the spec sheet make the newcomer a real contender, unlike the Ram 1500 Rebel introduced a few years after the first Raptor. In other words, this time around, Ram has come up with the real deal, a Godzilla to Ford’s King Kong!

But let's compare some data about the two protagonists, just for the fun of it. It's worth mentioning at the outset that Ford hasn't yet revealed the details of its next Raptor, even though it has detailed most of the other versions of the 2021 F-Series. We expect it won't be long now, but in the meantime, we'll make do with this first comparison in numbers. It's assumed, by the way, that Ford will introduce a more beastly Raptor for 2021, in light of its new rival coming over the horizon.

Engine and transmission
Makes sense to start with what's under the hood. The new TRX uses the same supercharged V8 engine as the Hellcat versions of the Dodge Challenger and Charger. The 6.2L displacement of this HEMI unit with a positive displacement compressor is larger than the 3.5L displacement of Ford's twin-turbo EcoBoost V6. The new Ram 1500 TRX delivers 702 hp and 650 lb-ft of torque. 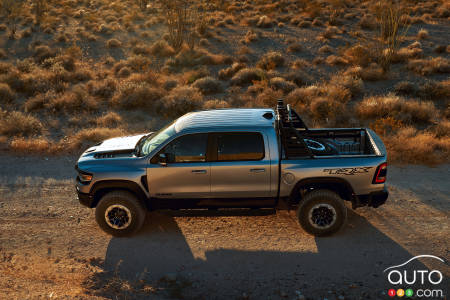 The Ford F-150 Raptor, in comparison, produces 450 hp and 510 lb-ft of torque. It will have to upgrade its ammo if it doesn't want to be outgunned by its new competitor. At the same time, speculation has already flooded websites around the world about the possibility of Ram offering a less-powerful trim of the TRX. For that, Ram could consider the 6.4L HEMI V8 block or even the 5.7L engine that's already in use at FCA. The 2021 Raptor, as mentioned, will probably be more muscular between the two front wheels than before.

While the TRX wins the power duel hands down, it's not as obvious when it comes to the transmission, as the Ram inherits an 8-speed automatic unit. The Raptor has two more for drivers to play with. Note that this statistic is of secondary importance since both transmissions are already doing very well in the "regular" versions of the two pickups.

Pedal to the Metal
Acceleration times are not normally part of consumers' buying criteria when it comes to a full-size pickup, but in this case, the models’ bared-teeth approach compels us to look at the numbers here too. The folks at FCA people are talking about a 0-96 km/h time of 4.5 seconds, while cheeky Ford actually doesn't reveal this information even for their Raptor. But, according to tests conducted by Motor Trend, the Raptor is able to lay down a time of 5.2 seconds. Car and Driver’s testers managed to record a time of 5.1 seconds... with an F-150 Limited equipped with the same turbocharged V6 as in the Raptor. In short, the Ram 1500 TRX is faster than the Raptor in a straight line. But again, we’re placing a solid bet on the next Raptor being faster than the model it will replace.

Dimensions
The two pickups share basically similar dimensions - they're in the same segment after all - but the Ram 1500 TRX is a little longer, wider and higher. The wheelbase is also very similar: 3,685.5 mm for the Ram versus 3,708.4 mm for the F-150.

Unfortunately, at the time of writing, FCA hasn't released the weight of its 4x4 brute yet, but it wouldn't be surprising if the weight is greater than that of the Raptor with a V6 (instead of V8) and an aluminum body. The TRX’s ground clearance (11.8 inches) is higher than the Raptor's (11.5 inches).

Since both pickups are designed for off-road driving, approach and departure angles should also be considered. The maximum approach angle of the Ram 1500 TRX is 30.2 degrees, the same as that of the F-150 Raptor. The rollover angle is 21.9 degrees compared to 22.9 degrees for the F-150. Finally, the departure angle of the Ram is 23.5 degrees, and 23.1 degrees for the Raptor. Oh yes, both pickups can operate in water basins up to 32 inches high.

A word about suspension, tires and drive modes
The main difference between the two vehicles is in the shock absorbers fitted to the high-travel suspension. Since the Raptor's arrival on the market, Fox 3.0 units have been taking care of the comfort of the Ford pickup truck. As for Ram, it's Bilstein (with its Black Hawk e2) that inherits the mandate to cushion the unevenness of the terrain under the truck. The two sets of shocks are equivalent in terms of their ability to absorb shocks thanks to their electronically controlled valves, and in this regard, only a real comparison match will be able to separate the two suspensions.

It should also be added that both trucks are built on reinforced chassis and also benefit from modified suspension components beyond the shock absorbers.

The tires also come from different sources. The Raptor uses BF Goodrich K02s, while the Ram is equipped with Goodyear Wrangler All Territory tires; both are off-road specialists that are 35 inches in diameter. Here again, we'll have to wait for a real test on and off the road before drawing our own conclusions. 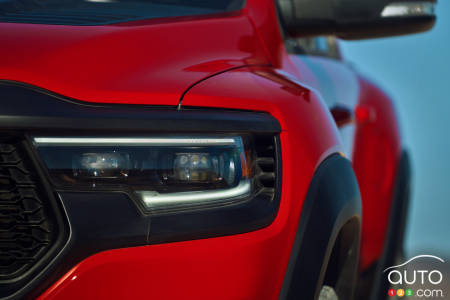 Finally, this brief overview wouldn't be complete without a comparison of the multiple drive modes available in each model. In this case, we have to give the Raptor the edge, as it has no less than six different modes (Normal, Sport, Weather, Mud/Sand, Baja and Rock Crawl). The Ram 1500 TRX has four of them (Normal, Wet/Snow, Off-Road and Baja), but it has the particularity of having a Launch Control button mounted directly on the dashboard, which opens the door to optimized for hot starts.

The last word
One thing is certain about these two beasts: the war has only just begun. The ball's in Ford's court now, and as it happens it’s scheduled to revise its Raptor for 2021. In fact there’s already speculation the model may inherit the Mustang GT500’s V8 engine next time around. Should be an interesting arms race…

As for the other players in the industry, we can hope for a General Motors pickup truck, but with the electric orientation GM wants to take in the next few years, all bets might be off; we may be in for a two-horse race in the gonzo-off-road-pickup sweepstakes.