Two separate declarations by automotive executives reported this week highlight the inevitable growing pains that come with transitioning from combustion-engine powertrains to electric and hybrid vehicles. Both can be seen as notes of caution for the automotive industry going forward, and both, as it happens, come from representatives of German automakers.

Volkswagen: Industry-wide crash is not impossible
First off, Volkswagen CEO Herbert Diess warned that the costs associated with developing and marketing electrified vehicles could potentially lead to an industry-wide crash if the transition is not managed properly. Speaking with German-language Süddeutsche Zeitung, he evoked the possible loss of 100,000 jobs if this happened.

“The transformation in speed and impact is difficult to manage.[…] Such an industry can crash faster than many believe.”

The comments are part of a pushback by VW against moves by the European Parliament to institute emissions-reduction targets. The initial goal was a 40% reduction by 2030, but negotiations with Germany and its automotive industry led to a 35% figure.

This pushback comes even as Volkswagen continues to claim it is on board with electric mobility and puts forth ambitious plans to offer more electrified models. Just this week, the company highlighted its multi-billion-dollar investment in the technology, and said that it wants to have sold 150,000 electrified models by 2020, and over 1 million by 2025. 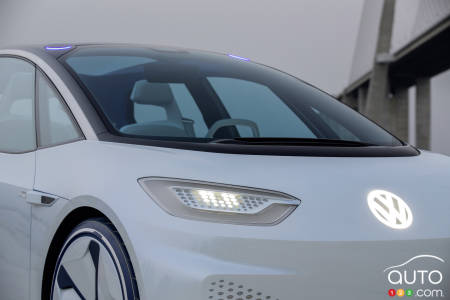 BMW: Gas engines will be around for a while
For its part, BMW is saying that even as it moves forward with electrification, it believes that 85% of its vehicles will still have combustion engines in them in 2030. BMW’s chief of product development, Klaus Frohlich, is cautioning that expectations are unrealistic as to the speed and extent of the transformation of global vehicle fleets to electrification in the coming years. At the recent Paris Motor Show, he spoke with GoAuto about the company’s calculations.

“A very optimistic scenario says 30% of BMWs will be pure electric or plug-in hybrids and 70% will be combustion. If you assume that, from this 30%, half of them are plug-in hybrids – I have 85% in my portfolio in 2030 with a combustion engine.”

Volkswagen’s stance may be a case of playing hardball in negotiations with governmental bodies over emissions standards in the coming years, and BMW could well be simply seeking to temper expectations in a domain that lends itself to overexcitement and impatience. And to place their viewpoints in context, they are far from the most reticent automakers when it comes to electrification, especially in comparison with brands like Mazda and Lexus, which have yet to do more than dip their toes in the waters of electrification.

No matter what, the next decade promises to be an active one in the industry. Interesting times, to be sure…