The Volkswagen ID.4 enters its second year on the market in 2022, and already, the German automaker is giving the all-electric compact SUV some upgrades - which is not all that common for a product that's only on its second rodeo.

At the same time, the changes are another sign of how important the model is for Volkswagen, which is determined to make it as competitive as possible in a nascent segment that promises to become very competitive in very short order.

The big change for the new model-year involves a boost to the model’s range. Unfortunately, the company didn't specify in its announcement just how many extra kilometers the ID.4 might offer once the upgrades are incorporated. Currently, range is listed at 400 km on Volkswagen Canada’s website for the rear-wheel drive version, and 386 km for the all-wheel drive variant. We can expect something closer to 450 km than 400 km with the upgrade.

The 2022 models also inherit a more powerful integrated charger, capable of 135 kilowatts rather than 125 at stations where DC fast charging is served. 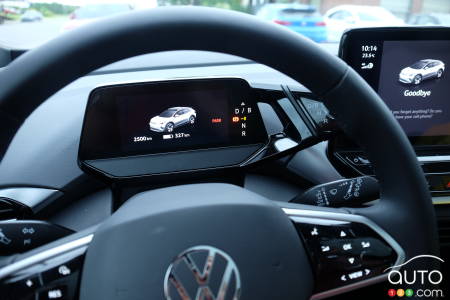 Volkswagen confirmed as well that it will begin building ID.4 models in the U.S. later this year. It also detailed some of the differences between the current vehicles built in Europe and the 2023 ID.4 models that will soon go into production at Volkswagen's Chattanooga, Tennessee plant.

Volkswagen's North American CEO Scott Keogh also said the company plans to launch a cheaper version of the ID.4 with a smaller battery pack, which will get a starting price of about $35,000 USD. We can only hope that Canada also gets a cheaper, if slightly less powerful entry-level variant.

We'll have more details when Volkswagen Canada confirms changes for our market, and also when we get a chance to test drive the updated version.

Volkswagen is giving its electric ID.4 crossover a range increase for 2022. The jump is smaller than hoped, but VW’s options may have been limited by the nee...