China, for auto manufacturers at the dawn of the 2020s, is like the Klondike was during the gold rush of the late 1800s. At that time prospectors used whatever means possible to get to the Yukon in hopes of making their fortune. At least 100,000 of them made the attempt.

Let’s say there are somewhat fewer automakers vying for gold on the Chinese market, but the competition is no less fierce. Buick, Cadillac and Lincoln, for example, have been working hard on developing that region, with success. You can now add the name of INFINITI to the list: Nissan’s luxury brand has announced its plans for the coming years, and it involves greater electrification and… a China strategy.

The company aims to triple its sales in the country by 2023, and it will begin by increasing its presence and involvement there. To start with, the company will be assembling its new QX50 SUV on Chinese soil; the model should hit the market there before the end of this year. Then INFINITI intends to introduce new products to the market, although for the moment it is staying mum on which ones. INFINITI already builds the Q50L and the Q70L (stretched versions of the models we know here) in China in partnership with Dongfeng. Up until now Chinese rules have obliged such partnerships between foreign and local firms, although the Chinese government recently indicated it would be doing away with the requirement.

It’s safe to assume that the models that do get introduced in China by INFINITI will be powered in some fashion or other by electricity. In the next seven years, INFINITI is hoping to have fully half the units they sell in China have electric or hybrid powertrains.

In fact, INFINITI’S intention is to have that 50% electrification percentage apply worldwide by 2025, this according to the company’s chairman and global president, Roland Krueger, who spoke with Automotive News.

INFINITI's commitment in China is taking shape effective immeditately: at the Beijing Motor Show that gets underway next week, visitors will get an eyeful of the incredible Q Inspiration concept, designed by Montrealer Karim Habib. 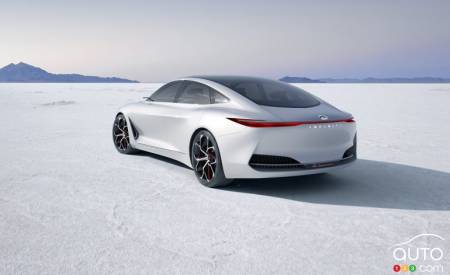