Since the beginning of the year, we’ve heard little from or about Mitsubishi. The small Japanese automaker, caught between its conflicting partners, Nissan and Renault, has been hit hard by the economic fallout of the pandemic and is working diligently to get through it. Now it's broken its silence with the announcement of a series of changes to its range of models for the year 2021, and even beyond to 2022.

Here's what we can expect from the Mitsubishi brand in the coming months.

The Outlander
One of the brand's most popular vehicles, the Outlander PHEV plug-in hybrid SUV, will get a new hybrid powertrain featuring a bigger, more-powerful gas engine and improved electric technology. As a result, we can expect to see it offer a longer range and a higher speed ceiling for driving in electric-only mode. The model will also benefit from other improvements, the company promises.

The same goes for the regular Outlander, for which a new generation is expected. Mitsubishi characterizes its next design as "bold, aggressive and distinctive". According to images of camouflaged versions circulating on the Internet, it’s likely the model will be at least partially inspired by the Engelberg Tourer concept presented at the 2019 Geneva Motor Show. 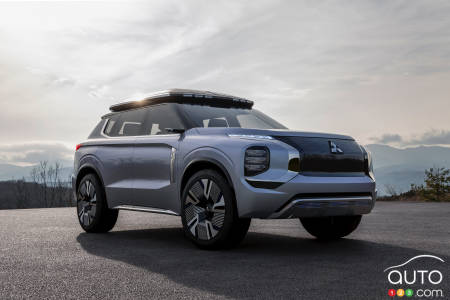 The next Outlander, as we’ve previously reported, will be the first vehicle produced by Mitsubishi since the start of the partnership with Nissan and Renault. Its structure will be that of the new Nissan Rogue and its powertrain will also be borrowed from Nissan.

The Mirage
Mitsubishi has confirmed that the revised North American Mirage will get the same styling as the versions sold abroad. As you can see on the photo provided by Mitsubishi, its look falls in line with the other models in the company’s lineup.

Unfortunately, we can't say it's beautiful; at first glance it's downright unappealing. In the eye of the beholder, as they say…

The Eclipse Cross
Mitsubishi’s middle-child SUV will benefit from some aesthetic updates. The front end will borrow elements of the brand's future design language, and early spy photos suggest that the designers have softened the approach in the back. Inside, the Eclipse Cross will get a new multimedia system, but we don't know what features it will incorporate yet.

See our Review of the 2020 Mitsubishi Eclipse Cross

2018: A Record Year for Mitsubishi in Canada

Mitsubishi closed out 2018 with its best year for sales since it arrived on the Canadian market back in 2002. The automaker sold some 25,000 units, with the ...