Mazda has finally rolled out the diesel-engine verison of its CX-5 SUV that it has been promising since seemingly forever.

It’s not really forever, of course, more like since 2017, when the model got its most-recent big revision. The diesel engine itself, on the other hand, has been teased by the manufacturer for about a decade. In 2010, Mazda had even invited a gaggle of Canadian journalists to test-drive a Mazda6, right-side drive and all, equipped for the occasion with new SKYACTIV and diesel engines.

Followed a frankly incredible series of delays, to the point where many believed this new diesel engine was a piece of fiction.

But here it is in the Big Apple, rolled out without too much pomp or fanfare. 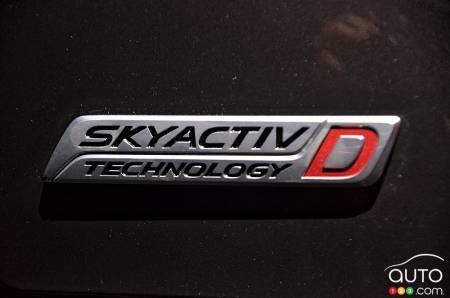 Pricy
The engine is a 2.2L 4-cylinder, by the way. Accompanied by two turbochargers in a single unit, this engine delivers up to 168 hp and 290 lb-ft of torque. As for fuel consumption, always a factor for those who lean towards diesel engines, it’s estimated at 7.8L/100 km highway and 8.7L/100 km city. Combined, that comes to 8.4L/100 km.

Which means, we can skip writing home to mom about it.

Another potentially disappointing tidbit about the powertrain, is that it will be offered only in the highest model on the CX-5 ladder, the Signature edition. This version starts at over $40,000 in Canada. South of the border, consumers will have to fork over an extra $4,000 or so to get the diesel engine instead of the gasoline version.

That’s quite a bit, especially when you consider those fuel-consumption figures. It won’t be easy to recover the extra upfront costs through savings at the pump.

Then, of course, add in to the mix a model like the Toyota RAV4 Hybrid, less expensive up front, more powerful and more fuel-economical.

Read our Review of the 2019 Mazda CX-5 Signature 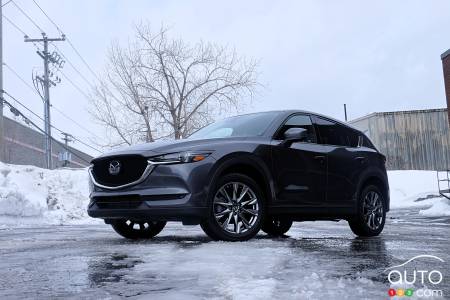 Clearly this new diesel-engine CX-5 won’t be an easy sell. Further down the road, however, it will be offered with other versions and models.

In the more immediate, we’ll have to see how consumers react to the new product; as we’ve seen so often in the automotive industry, success is very often dependent on synchronicity.

We’re not sure that in this case Mazda got that right.

Mazda announced at the NYC show that it is taking orders in the U.S. as of now. We’ll have to wait for confirmation from its Canadian division on when consumers here can do the same.