Among 4x4 die-hards, the original Chevrolet Blazer is a true icon. Good-condition models dating from the late 1960s sell for a veritable fortune these days. And so, as we’ve seen a number of times in recent years, the company logically asked itself, Why waste strong brand recognition? Since last year Chevrolet has thus brought back the Blazer name, this time stuck on a crossover the company has parachuted into its already-well-stocked SUV lineup in between the Equinox and the Traverse.

Predictably, some see the appropriation of the Blazer name as sacrilege; others rejoice at the return of a familiar name to a lineup that includes not just big ‘utes but the tiny Spark and the electric Bolt as well.

Whatever side of that particular fence you sit on, whether you’re an outraged nostalgist or a curious forward-looker, the Chevy Blazer does actually fill a need in the automaker’s lineup. It will look to siphon off sales from the likes of the Ford Edge, Nissan Murano and Honda Passport, which might be easier said than done.

Fortunately, unlike most of its rivals, the new Blazer is a rather sporty affair, especially in its RS incarnation, which borrows visual elements from the automaker’s muscle car division. This is especially so in front, with the dominant grille and the thin daytime running lights.

Not the Blazer we once knew
Those familiar with the Blazer of old will know right off the bat that the Blazer of new has absolutely nothing in common with previous generations – apart from the Chevy badge and the name itself. Unlike previous models, this SUV sits not on a good old ladder frame, but on a unibody architecture, the same one GM already uses for the Cadillac XT5, for one. The simple fact that the Blazer is equipped with a six-nut hub confirms the relationship with the brand's other SUVs.

The design also serves to differentiate the model from them, mind you. While past Blazers had stretched truck-like roofs, the newby takes inspiration from the Camaro to set itself apart from the herd of look-alike SUVs currently on the market. In fact, stand it next to its competitors and the new Blazer looks like a bit of a bad boy, especially the RS. That version sports details like black exterior elements like the grille, the headlight housings and the 20-inch wheels. What’s more, with the white finish on my tester, the contrasting effect of the floating roof is nicely amplified. Can you tell I found the Blazer RS to be a looker?

Shades of a sport sedan?
The reality is, of course, that despite its Camaro schnozz the Blazer doesn’t handle on the road quite the same way as the muscle car. Still, after a few hours on the road – which was actually a challenge what with the Covid-19-caused confinement measures this spring – I felt like I was at the wheel of a vehicle with sharper driving dynamics than the average model in this segment. The stiff chassis, firm suspension and more-responsive steering (on the RS model only) give it a surprisingly nimble feel for a utility model.

What’s more, the Camaro-inspired dashboard with its large round climate control vents and the narrow fenestration gives the front half of the Blazer’s interior the feel of a sports car. At the wheel, you don’t get the impression you’re driving an SUV, even with the higher ground clearance of the model. In other words, the Blazer RS is mindful of appealing to those for whom driving pleasure matters.

A word regarding the powertrain, which unsurprisingly is already in wide use across the GM lineups of vehicles. The trusty 3.6L direct-injection, naturally aspirated V6 once again delivers around 300 horses (308 here, to be precise), while torque maxes out at 270 lb-ft at 5,000 RPM. The only transmission on offer is a 9-speed automatic, which has proven in wide use itself since its introduction in GM vehicles.

The Blazer RS is no lightweight, literally speaking, but it acquits itself well during aggressive accelerations. Like other GM SUVs, the Blazer can be driven in several configurations: FWD, AWD, Sport, Off-Road and Towing. I found myself gravitating back to Sport, which sharpens the reactions of the V6 by stretching out the gears in the appropriate situations.

I wouldn’t mind at all if Chevrolet added a pair of paddle shifters on the back of the steering wheel to further liven up the driving experience. Maybe in the near-future? Nonetheless, in Sport mode accelerations are more than acceptable. It wouldn’t hurt the engine to be more expressive in doing so, the Blazer might then have a more convincing argument to make to skeptics.

One of the drawbacks of the SUV’S sporty bent is that you can expect to pay more at the pump, especially if your driving tends to be aggressive. My average was around 13.0L/100 km, higher than the official Canadian EnerGuide figure. I would wager that keeping the vehicle in FWD mode and taking it easy on the gas pedal would reduce the difference between those numbers.

The last word
The big takeaway for me here is that the 2020 Chevrolet Blazer constitutes a pleasant surprise, even though it’s quite heavy and offers frankly atrocious rear visibility (though that’s hardly unique among SUVs that try to be sporty). The midsize utility model shows potential that I can’t say I previously saw in GM SUVs. I even think the stiff chassis of this model could handle and benefit from a more-muscular engine. No sense in dreaming, however, because frankly GM has other fish to fry right now than to try and win over a handful of performance nuts.

Then there’s the double-take-inducing pricing of the RS variant I drove. At $53,768, when the options are factored in, it’s no bargain, and I would if buying the new Blazer probably opt for a less dressy version. At this price, there are some pretty juicy options out there on the market that might tempt me more. In fact, think hard enough about it, why not just go for the Chevy Camaro for some real driving pleasure?

The muscular look
The sporty feel
The effective automatic transmission 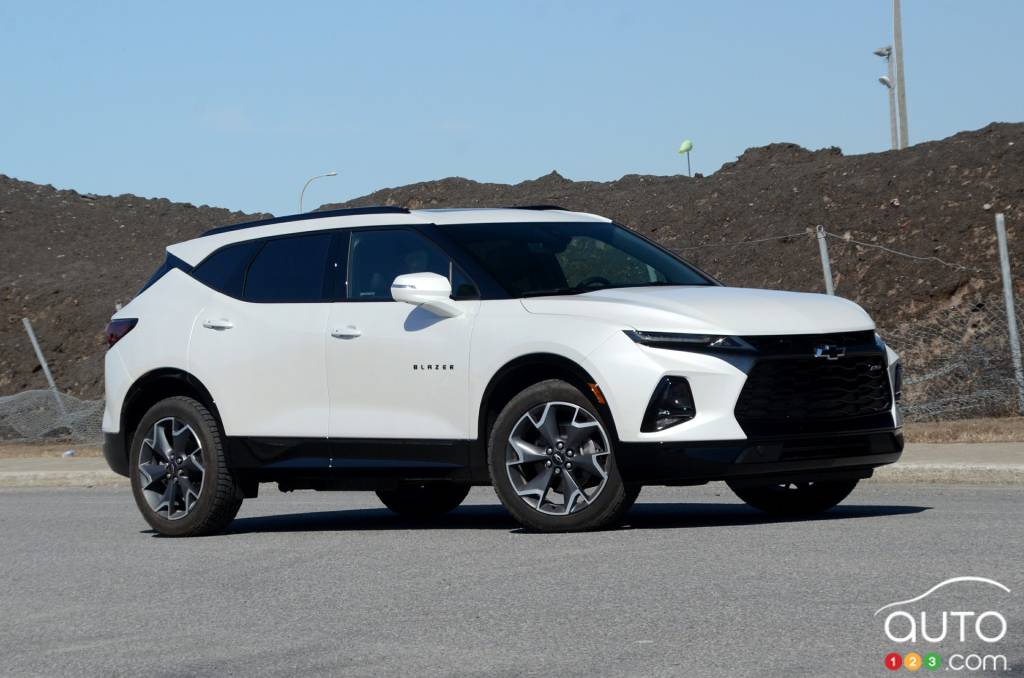 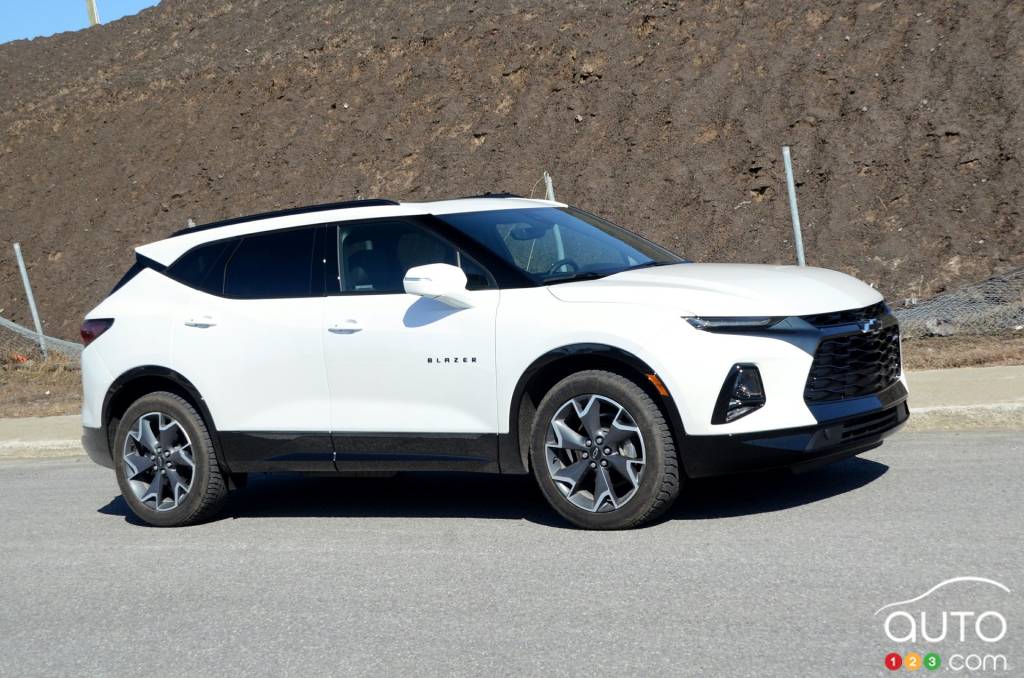 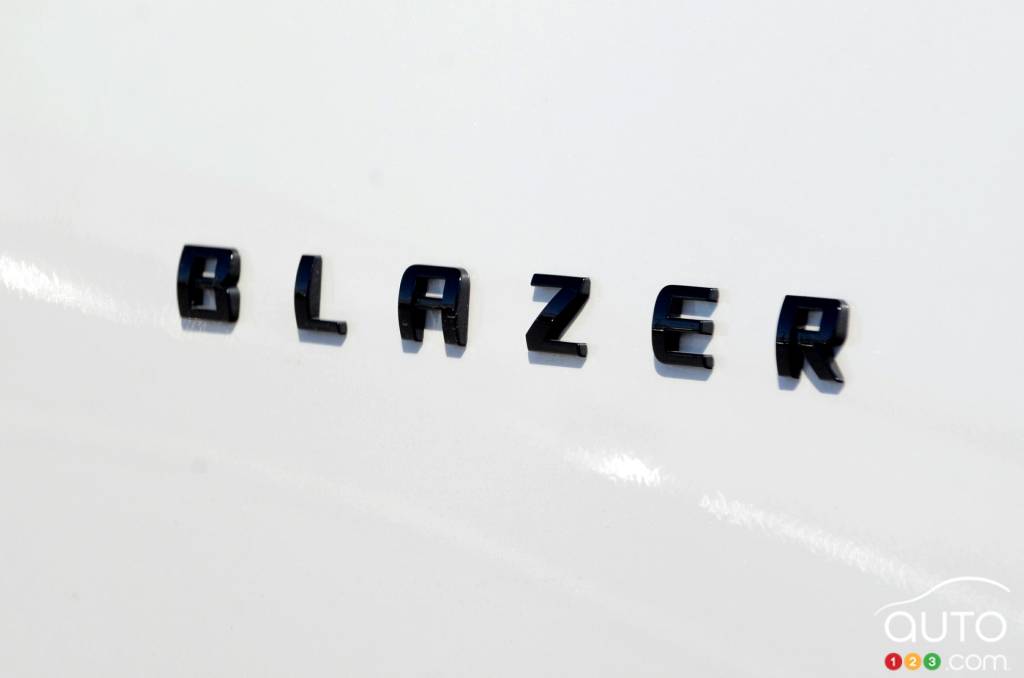 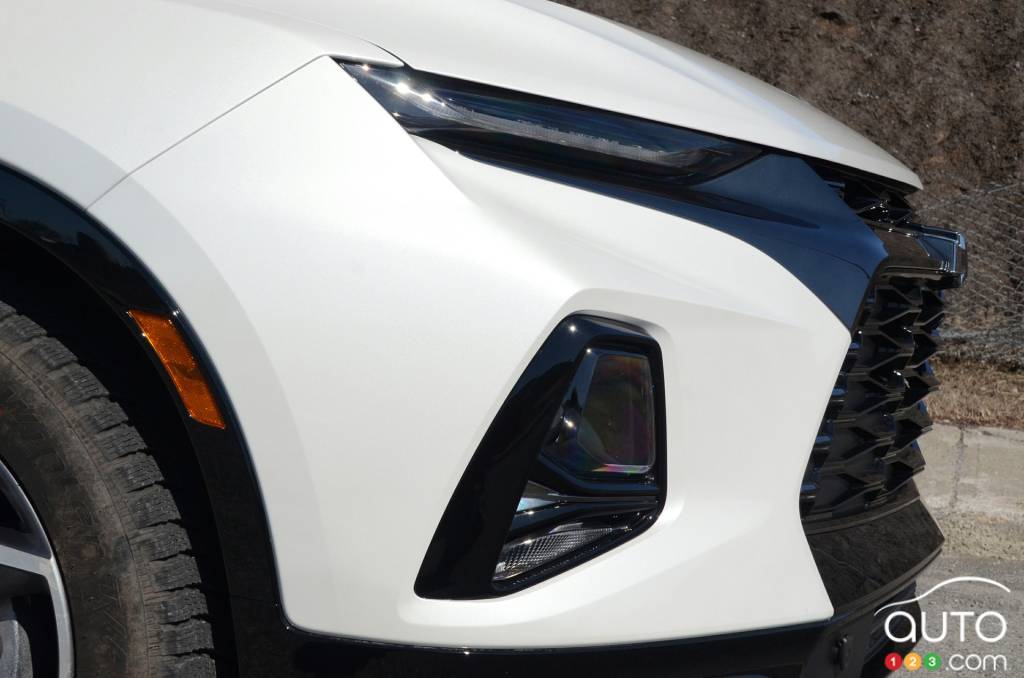 How to choose between the 2020 Chevrolet Blazer and the 2020 Hyundai Santa Fe? The latter is more mature and perfected, but the former has an engaging RS ver...