My colleague Daniel Rufiange has already ably covered the ins and outs of driving the new Ford Bronco. In fact, I was sitting right next to him when he first drove the hard-nosed new SUV in the summer of 2021 in the Toronto area, and I formed a similar opinion of it. In a nutshell, the Jeep Wrangler's new avowed arch-rival takes the formula of the most recognizable 4x4s on Earth and adopts much of it, but with enough distinctive features that you won’t confuse the two when you see them on the street.

Speaking of street: While it's clear the Bronco is a vehicle capable of following the Wrangler down the more difficult paths, in my mind it’s important to determine whether it has what it takes to stand up to the ultimate test: the urban jungle!

Because let's face it, many owners of a Jeep Wrangler Unlimited - the name given to the 4-door variant - will never take their 4x4 onto anything rougher than a pot-holed urban or suburban road. And the Ford Bronco - no matter how competent it is away from the pavement – is also likely to be called upon to play the city slicker role for many owners.

So it was that, for a few days in December, I got behind the wheel of this off-road-ready brute to see what day-to-day life might be like for someone using their Bronco almost exclusively in the city and on the highway. Does it make sense to buy such an extreme vehicle just to get out of the occasional snowbank? You probably already know the answer, but if you want to know more, read on.

What exactly is a Bronco Wildtrak?
The Wildtrak model resides at the top of the lineup - at least for now, because we already know that Ford will be adding a Bronco Raptor, not to mention the Everglades package that will come with exclusive wheels, a factory-installed winch and even a snorkel-type air intake. The latter even supplants the Badlands badge, which is considered a direct rival to the Jeep Wrangler Rubicon. In other words, those two 4x4s are designed for genuinely arduous off-road use.

The Wildtrak version, on the other hand, is designed for a more delinquent kind of driving in off-road situations. By which I mean, this is the closest Bronco equivalent option to the F-150 Raptor right now, until we get the Bronco Raptor that will become THE most crazily equipped model when it comes out in a few months.

Like the F-150 Raptor or the future Bronco Raptor, this Wildtrak version was designed for high-speed off-road runs in places like the Baja desert. Don't think that the Wildtrak can't survive a rough and narrow Canadian forest trail, but let's just say that its specialty is driving fast. But as it happens, vast sandy deserts are a rarity in this country.

The vehicle put to the test on this all-asphalt ride was also decked in the Sasquatch package that comes standard on the Wildtrak model. This package adds 17-inch wheels compatible with bead locks and 35-inch LT315/70R17 off-road tires, a 4:7 final drive ratio with electronically locked front and rear axles and a high-clearance suspension, not to mention the widened fenders that are mandatory with this specific suspension.

From the images you may have noticed the presence of a protective bar at the front, as well as a exclusive Ford Performance bumper that removes the factory-installed fog lights, but greatly enhances the already menacing look of Ford’s new 4x4. To which I say, great, but did it really need these additions to further terrorize urban and suburban neighborhoods?

Driving a brute
As soon as you climb aboard this big lug, you already know you're dealing with something different. First of all, the step is high, a result of the impressive ground clearance, which leads me to recommend buyers opt in the tubular running boards that were thoughtfully fitted to my tester.

Once you’re inside, the driving position is excellent, and the seats in the first row are soft in the purest Ford tradition. The steering wheel, neither too big nor too small, is pleasant to hold and the gearbox lever is also in the right place for shifting gears.

Not far from that level, you find the G.O.A.T. (Goes Over Any Type of Terrain) dial. It displays the SUV's multiple drive modes, and even the type of drive, which can be set to rear-wheel drive, four-wheel drive automatic, four-wheel drive high and four-wheel drive low. It’s also used for other off-road settings that are totally irrelevant in city driving, such as axle locks, front sway bar deactivation or even traction control, the designers placed this series of buttons over the dashboard.

In the back, passenger space is equivalent to that of the Jeep Wrangler Unlimited, while trunk space is very square... and pretty impressive given the purpose of this life-size toy.

For my first jaunt behind the wheel of the Bronco Wildtrak I pointed it in the direction of the Queen City. I was Toronto-bound to attend the presentation of a whole another type of crossover and the only transportation options I had were this monster truck writ small or my old Ford Ranger with a 5-speed manual transmission. And no cruise control. And no Bluetooth connectivity. Ah, modern life. I’d decided the Bronco Wildtrak, despite its almost ludicrously rugged looks, was a more sensible option than my beloved old wreck of a pickup.

On Highway 401, it's not uncommon to go over 120 km/h. In fact, even at that speed, it's best to stick to the right lane; there are always drivers in a rush doing more then that in the “passing” lane.

The Bronco Wildtrak has no trouble driving at such speeds, with its wide lanes and suspension providing reassurance to anyone behind the wheel. The trouble is, that removable plastic roof isn't designed to filter out all road noise. Despite the extra insulation included in this trim, the SUV has a hard time keeping external sounds outside where they belong!

I also took advantage of my three-hour drive west to make a few phone calls with the Apple CarPlay device, and unfortunately, the sound I got out of the app working with the multimedia system was pretty disappointing. I even had to hang up on one of the calls because I couldn't understand the person on the other end. Add the cacophony caused by the removable roof and you'll understand that the Bronco is no Lincoln Continental.

There’s more: with its square shape, the Ford 4x4 is also sensitive to side winds and even headwinds! Fortunately, its heavy weight ensures that the vehicle maintains traction, even at 120 km/h on the highway - although it's important to never forget the laws of physics when driving such a vehicle. And with this high-travel suspension, you have to be careful not to push too hard when cornering. The flip side of the coin is that this Bronco Wildtrak is very comfortable to actually sit in, despite the poor soundproofing.

For the sake of fuel economy, I left the vehicle in two-wheel drive for the vast majority of my time in the Bronco. It's true that on an icy surface and with traction control off, the Bronco skids like a drift car, but by being gentle with the right pedal, the big car is very easy to control on a daily basis.

The freakin’ snow bank!
In a fit of overconfidence, at one point I decided I wanted to climb a snowbank with the Bronco. At first glance it looked harmless. In fact, I even got stuck on purpose to see how the Bronco would perform. But when I put the vehicle in 4x4 Slow mode with first the Baja driving mode or then the Slippery mode, I was confronted with a capricious electronic system that refused all the requests I made using the available knobs and buttons. The vehicle refused to move forward and you could feel that the traction was not there.

After a bit of time (about 15 minutes of fluster and bluster) and after finally selecting the 4x4 High mode, and also after deactivating the traction control, I got the Bronco out of its snowy prison. With those modes set, it was is if the snowbank wasn’t even there, the tires crushing to powder the snow and ice accumulated under the vehicle.

This episode wasn’t exactly reassuring, but at least my Ford beast didn’t suffer the ultimate humiliation of having to be rescued by a tow truck - or even, heaven forbid, my old pickup. Honour saved! To be honest, I put half the blame on the dummkopf behind the wheel in this case. I couldn’t help but recall the off-road chops the Bronco displayed last summer when I took it for a joyride.

The last word
No way, no how is the Ford Bronco the perfect urban vehicle. But, notwithstanding that unfortunate snowbank episode, Ford's 4x4 has the goods to keep you out of trouble in winter. At the same time, things can be complicated with this thing. Parking manoeuvres are more difficult, and the Bronco doesn't have the agility of a Mini Cooper because of its wide fenders. And I haven't even mentioned fuel consumption, which is close to 15L/100 km – and that's while leaving it the vast majority of the time in 2WD and Normal or Eco driving mode!

That won’t matter much to buyers, I suppose, because in the end the Ford Bronco Wildtrak is, like its rival (Jeep Wrangler), an image vehicle, an all-purpose vehicle. To be used in the city, then in the country on weekends, an occasion maybe even at a 4x4 enthusiasts' rally. In fact, in this respect, I would go so far as to say that the Bronco is more successful than the Jeep... in terms of image. The 4x4 comparison between the two rivals will have to wait. 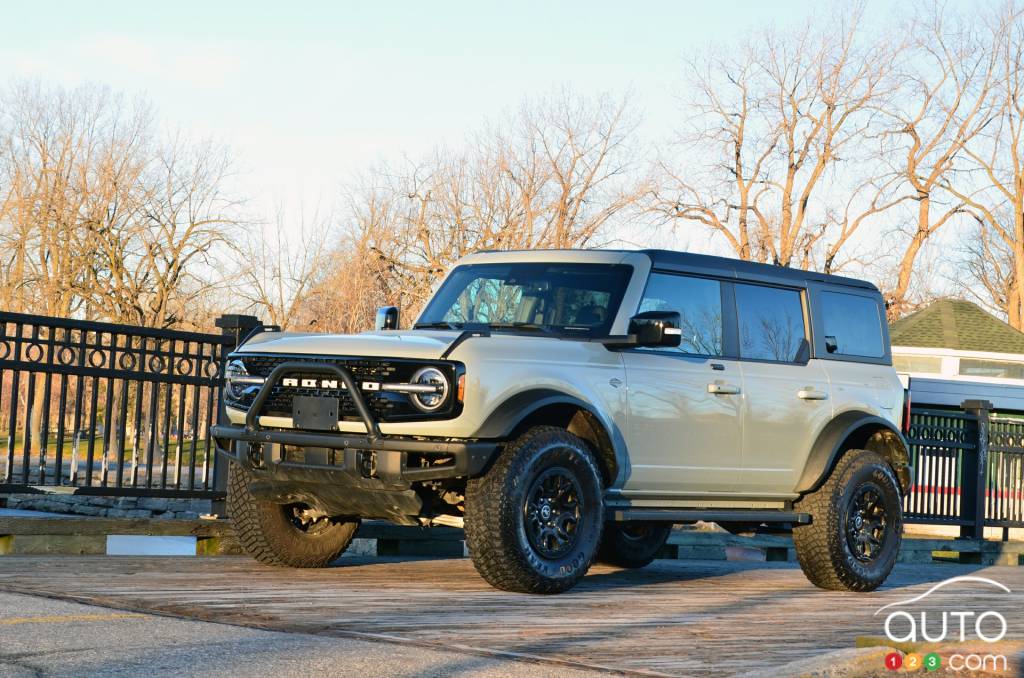 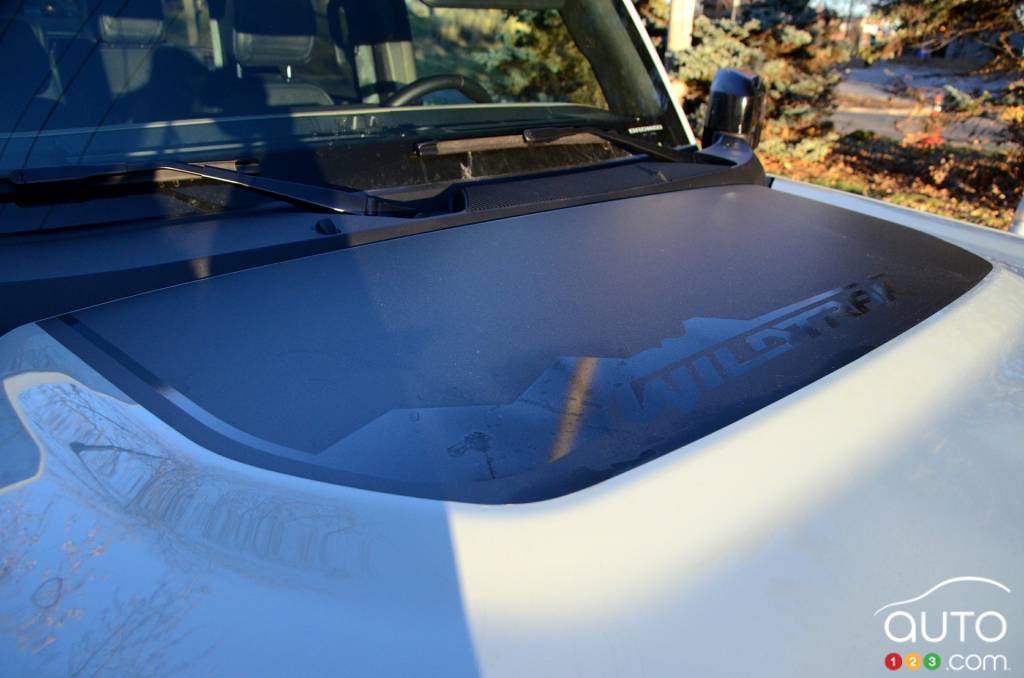 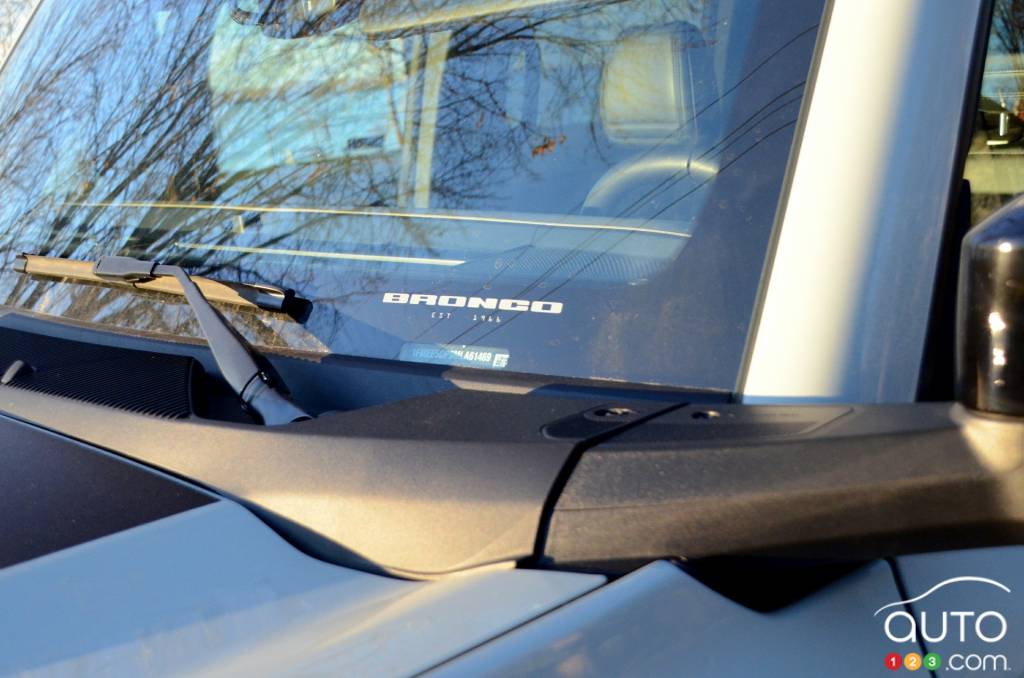 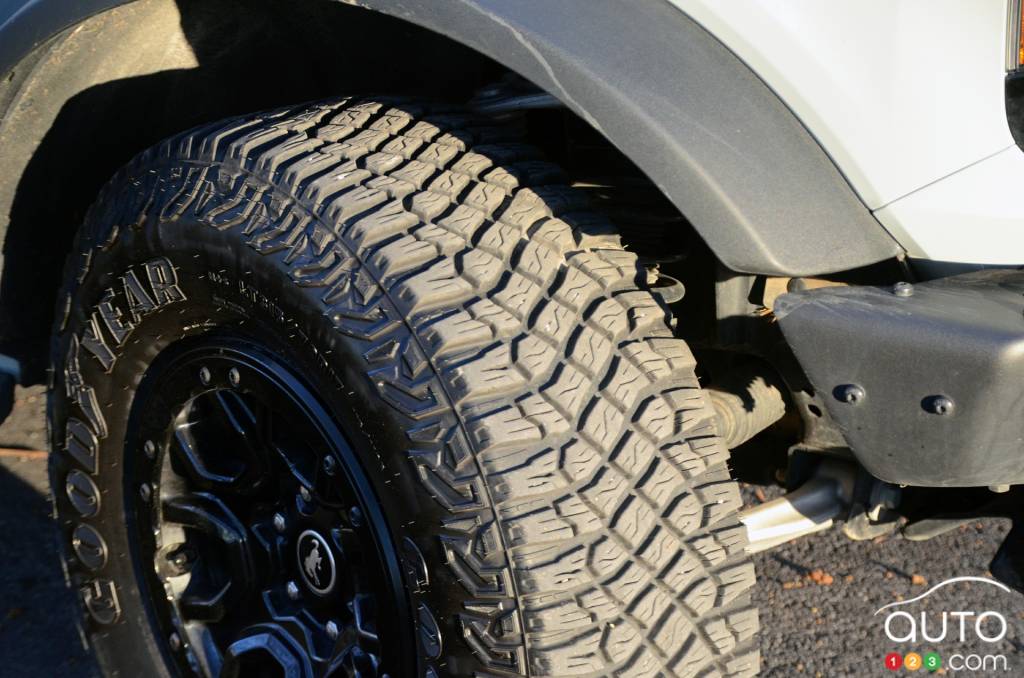