What's a manufacturer to do if it wants a bigger part of what has become a very, very profitable pie in recent years? Why, it’s simple: have more forks to dig in with! I recently drove one of those new forks produced by GM. Meet the 2021 Jeep Gladiator Mojave, a new variant of the long-awaited pickup truck finally unleashed two years ago by Jeep, a model that’s already made its mark in the off-roading community alongside the brand's iconic Jeep Wrangler.

Jeep understands this reality of the automotive industry in 2021: Yes, many motorists do want to be adventurous, but more importantly, they want to be seen behind the wheel of a vehicle that could go anywhere and withstand any kind of abuse. That would be the Gladiator. Even a basic Sport S trim is a serious candidate to take on the world. But from Jeep’s point of view, why stop there? If the demand is there, Jeep would be crazy to ignore it. The Porsche 911 Carrera is an incredible sports car at its core, but that doesn't stop its designers from developing all the other liveries of the model, including the amazing Turbo S.

The Gladiator Mojave, in spite of its hellish looks, is therefore aimed at a slightly different clientele than the typical Rubicon buyer. As its name suggests, the Mojave was designed for high-speed desert cruising, unlike the Rubicon, which seems to be just right to take on... the Rubicon, or other such super-rough trails or obstacle courses.

The Mojave was inspired by the F-150 Raptor and, by the same token, by the Ram 1500 TRX - another FCA product of course.

Time will tell if the Mojave proves as successful as the Rubicon in North America, and specifically in Canada. My goal in testing it was to see the new 2021 Gladiator model is worth it or if, on the contrary, its existence adds up to little more than just another marketing operation.

Rubicon vs Mojave
It’s worth taking a moment to note the differences between the model that’s been the standard for purists over the years and this new, more specialized alternative.

Looked at from the bottom, the Mojave's Command-Trac transfer case has a ratio of 2.72:1, while the Rubicon's Rock-Trac has a ratio of 4.0:1. In other words, the Mojave can drive at a higher rate when the 4L mode is engaged.

To withstand the slightly harsher treatments of high-speed desert driving, the steering knuckles are made of cast iron, unlike the Rubicon's aluminum knuckles. What's more, the Fox shocks with external reservoirs are actually designed to provide improved dampening during high-speed action. In fact, the Mojave's springs are specific to this model, which have been adjusted to the exclusive shock absorbers.

Front hydraulic jounce bumpers are also present – there’s also a one-inch increase in suspension height - while those on the second axle have been upgraded in comparison with other Gladiator versions, again to help withstand rougher desert driving.

Less uncomfortable on a daily basis
If there's one thing that describes the Rubicon badge, it's that very firm suspension that makes the pickup jump out of any pothole. The Mojave Gladiator does a much better job in that department. In fact, I will even go as far as to say that this variant is THE most comfortable model in the range, precisely because of those Fox shocks with external reservoirs. Let's be clear, the Gladiator Mojave is not in the league of the Chrysler 300 for delivering a smooth ride, but for those wanting that adventure-ready look from their vehicle, but also want comfort levels acceptable enough to do grocery runs in, the Mojave is the Gladiator to go with!

Both hands on the wheel!
That said, I found the same kind of behaviour in this version of the Gladiator that I’ve experienced from others, and so it behooves drivers to be vigilant and continually make corrections to the steering, even on a highway in good condition. However, the Mojave's exclusive tires give it the edge over the Rubicon, which I think is the worst of the lot. Once again, Jeep habitues know what to expect!

Inside
After climbing into the cabin - fortunately there’s a handle attached to the A-pillar – you’ll not a driving position that’s somewhat particular. Indeed, like in the Wrangler, the driver sits very close to the dashboard and the driving position is more vertical than in a compact SUV for example. In this case, the Gladiator was equipped with a 6-speed manual transmission and, like I noted in a Wrangler I tested not too long ago, the transmission lever no longer vibrates as it did in the past. Owners of the JK generation Wrangler know what I'm talking about! At the same time, this cylindrical shift knob isn't the most comfortable to hold. Thankfully the sport steering wheel is...

As is still the case with the Wrangler, a second lever is used to select the desired type of drivetrain (2H, 4H, N, 4L), just like in the good old days of 4x4s. There are more options beyond that to adjust the truck's off-road capabilities, located not far from the two levers, but they are fewer than in the Rubicon version, which allows you to lock the front axle. The Mojave only lets you lock the one in the rear.

What's more, another button, normally found beneath the OffRoad+ command, is conspicuous by its absence. That would be the Sway Bar button, and without it you can’t disconnect the Gladiator Mojave’s sway bars when crossing complicated obstacles. After all, the Mojave is designed for higher speeds in the desert, and in the desert there tends to be sand, not necessarily impassable rocks!

For a truer comparison, you would actually have to compare the two off-road versions of the Gladiator one after the other in the same conditions to discover the real advantages and disadvantages of each. On a rough and snowy road like the one I drove, it’s difficult to pinpoint the differences with the Rubicon. However, note that the Mojave made quick and easy work of the few water-filled pits that I encountered. In 4L mode, the Gladiator Mojave remains a great choice for rough roads.

About the manual transmission and the Pentastar V6
I would be derelict in my duties if I neglected to comment on powertrain performance. The Pentastar V6 needs no introduction, of course; the 6-cylinder is in its tenth year of service and can be found in just about every model produced by Jeep. In a nutshell, the base engine of both the Gladiator and Wrangler models is very well adapted - no surprise here - for road trips, including those that veer far off the road.  As for the manual gearbox, let's just say that it adds to the folklore of the model. Its precision is certainly not its greatest quality, but on board a truck, that’s nothing to be alarmed about.

The verdict
In offering this new alternative to the Rubicon, Jeep made a no-brainer of a decision. The Gladiator Mojave orders the same starting price as the Rubicon. For fans of hard-core off-roading, the Rubicon is still the logical option, but since the vast majority of kilometres driven by owners of even a model like the Gladiator are on asphalt, the Mojave variant is the winner thanks to its softer suspension - even if deserts are kind of rare in Canada.

Price tag, when taking the many options
Difficult to access the bed
Comfort levels still only rise to acceptable 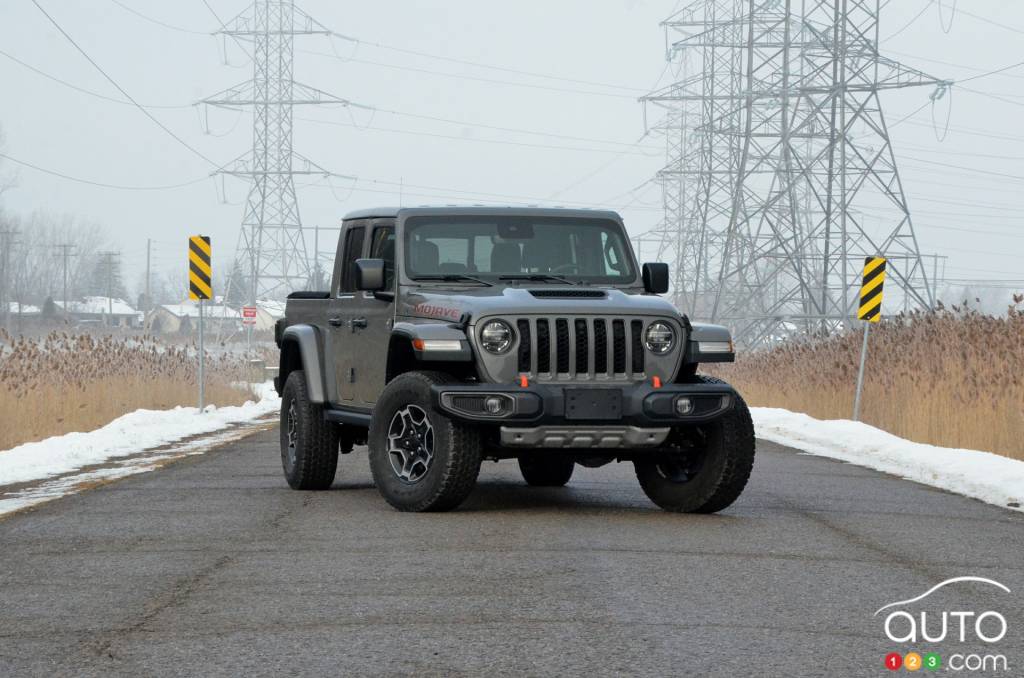 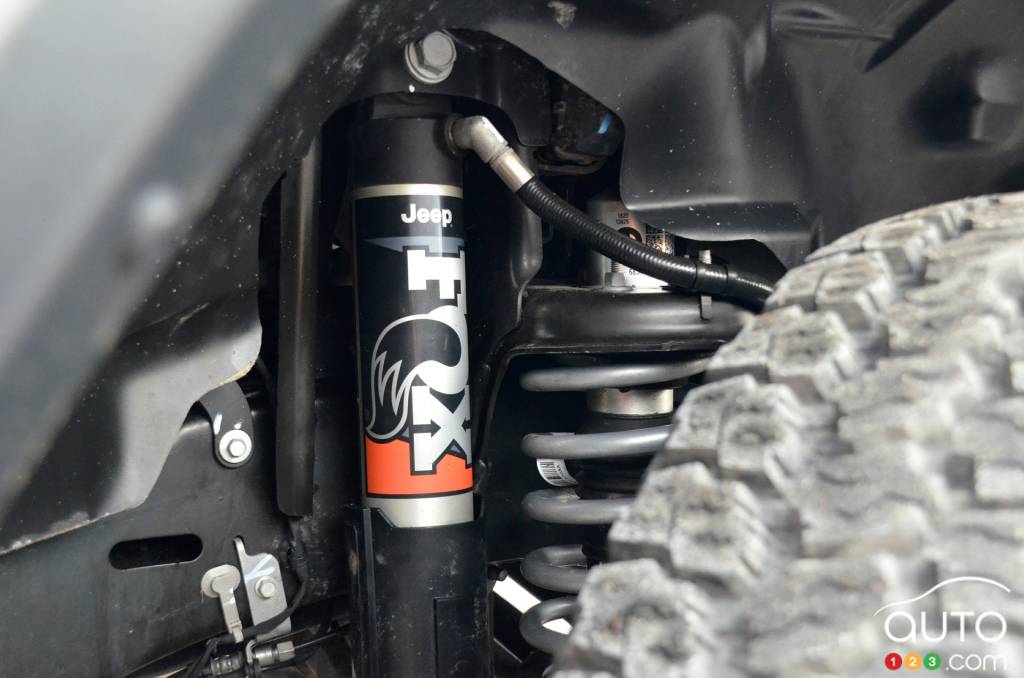 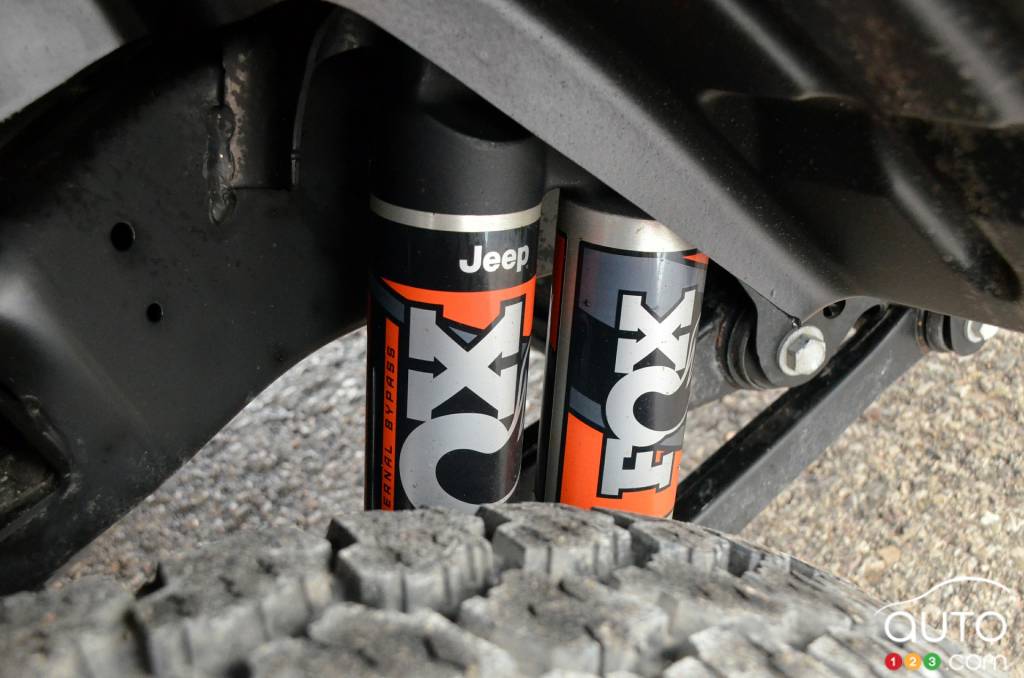 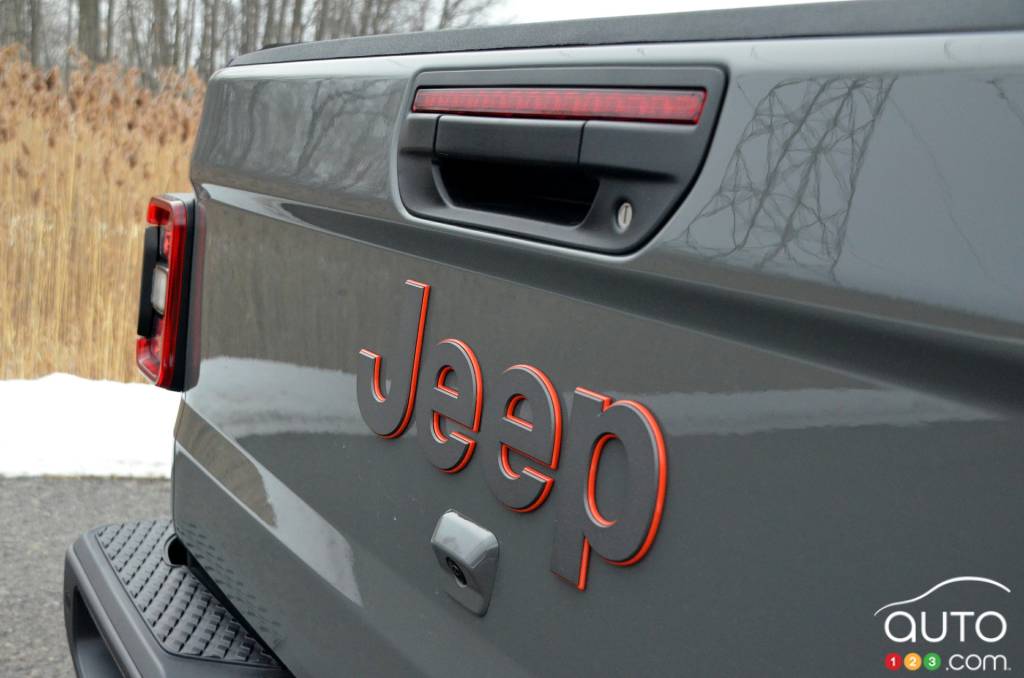