Kia has progressed from being a relative lightweight in the early 2000s - at least in Canada - to a whole other level in recent years. In fact, it's safe to say that the Korean automaker’s lineup has become a short-list destination for consumers interested in electric mobility.

In addition to offering two electric versions of its small crossovers (the Niro and Soul duo), Kia is about to launch the EV6, the brand's first exclusively electric vehicle. And that's not all - the terms "hybrid" and "plug-in hybrid" are used on a host of models across the automaker's lineup already, and there are more electrified variants in the pipeline.

The most recent PHEV addition to the Kia roster is found in the Sorento lineup. That midsize SUV got a major redesign last year, and now it gifts us for 2022 both a hybrid plug-in version and a straight-up hybrid. The first of those was the one we had occasion to drive for an extensive road test this fall and early winter. Here's what we learned from our first contact with the most frugal Sorento in history.

Electrified SUVs – flavour of the decade
Redesigned from top to bottom last year, the fourth-generation Kia Sorento carries over some of the lines of previous generations, but with a few new visual features at both ends. The back of the SUV is most noticeably different, with position lights that are reminiscent of those on a certain Lincoln Navigator marketed in the early 2000s.

From the side, the windows are very similar to the previous Sorento, but some mild changes on the C-pillar are enough to differentiate the old and new versions of the popular crossover. As for the new model’s front end, it's a little more aggressive than in the past with its grille integrating the headlights.

One of the best aspects of this plug-in hybrid variant is that it has very few differences from the other Sorento models, except for the extra port on the right side of the back end, and the wheels that are exclusive to the hybrid and plug-in hybrid models. Oh right, there's also a tiny EcoHybrid badge on the back hatch. But those are all the clues this electrified version is going to offer up to inform friends, family, passersby and strangers in the grocery store parking lot that your big SUV is as fuel efficient as a subcompact car.

And who needs to show off anyways? Besides, the Sorento is not exactly athletic-looking. And anyways, the Sorento can boast of being well put-together, as evidenced by the alignment of the body panels.

A well-designed interior
Smaller than the Telluride, the Sorento is still pretty darn versatile in its own right, what with its three rows of seats and spacious, welcoming interior. For a family of four that likes to give lifts on occasion, that third row is an undeniable asset. Forget about loading large items if it's up, though; in that configuration, there’s precious little cargo space in back.

On the other hand, when those two “emergency” seats are folded into the trunk floor, cargo volume gets interesting. Think of the Sorento as a halfway house between the Telluride and the Sportage in this regard. No matter what you do with those back seats, space for passengers in the first two rows is great, and those sitting there have easy access to all the luxuries available in the brand's catalog, particularly in the SX version we drove.

The in-house infotainment system is familiar to those who know the brand, what with those bulbs displaying on the screen to identify radio stations, the ambient sounds and the interface’s relatively clear menus. I did find that, while the touchscreen is responsive, the touch buttons on either side are not as easy to use as a row of traditional buttons.
As is often the case, the climate system controls are grouped together under the centre screen, and their presentation is simple and effective. The same is true of the centre console, where the gearshift knob is as easy to use as anything – flip right and you go, flip left you back up, and stop in centre and you’re parked! 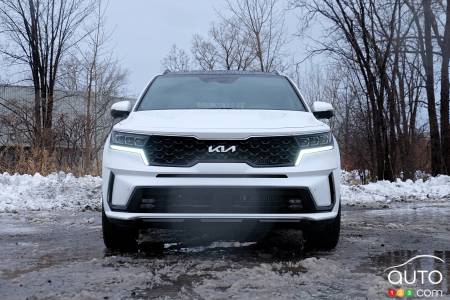 At the wheel
Obviously, you have to temper your expectations as to the level of excitement you’ll get driving around in a people-mover like the Sorento PHEV. The Sorento is not there to excite you, it’s there to help you transport the spouse and kids with enough room for ski equipment, camping gear, hockey bags... you get the idea!

One thing you’ll notice is how quiet it is on board, a sign that soundproofing was a proper focus for Kia’s engineers. The vehicle is so quiet, in fact, that you might find yourself getting a little over-aggressive with your right foot just to hear something – anything - from the little turbo 4-cylinder engine under the hood.

All of which, of course, makes the Sorento quite perfectly suited for long-distance road trips. The Korean crossover absorbs the beatings meted out by our Canadian roads quite well, despite the presence of those 19-inch wheels. The suspension was calibrated for comfort above all else, hence the road-trip qualities, but it also means there's a bit of roll when pushing it through corners. As for the powertrain, it's all about consuming fuel by the teacup, as much as possible.

Like any modern vehicle loaded with electronic systems, the Sorento PHEV offers drive modes, including a Sport mode that somewhat sharpens the reactions of the Sorento PHEV's powertrain - though we're not talking about a vehicle as muscular as the Stinger, no matter what mode you put it in. The Sorento PHEV is built for relaxed driving, and so the transmission works unnoticed behind the scenes and the steering is light and bit slow to respond.

That said, despite its unathletic appearance, the plug-in Sorento offers sufficient power and then some. This is quite a feat given the small size of the 1.6L turbocharge 4-cylinder engine under the hood. The electric motor working with it does result in a very acceptable 261 hp and 258 lb-ft of torque. Just keep in mind that this is a vehicle that’s heavy, or at least it’s heavier than the Toyota RAV4 Prime, and so this PHEV can’t compete with that smaller model’s excellent accelerative capabilities.

On the other hand, Kia’s crossover acquits itself really well in the fuel-consumption department. My result after a few days behind the wheel: 4.8L/100 km. The 60-km electric range seems totally achievable, which is ideal for those who do short errands several times a week.

The last word
Let's face it, the Kia Sorento PHEV SX we drove is well-equipped and all spruced up. Which means it comes with a hefty $54,995 price tag, before prepaid and taxes. However, for residents of Quebec, British Columbia and New Brunswick, it is possible to take advantage of a provincial rebate, as well as the federal rebate, since the Sorento PHEV’s base model is just under $45,000 - making it possible to get behind the wheel of a plug-in Sorento for a more reasonable sum.

Comfortable, well put-together and a real miser at the pump, Kia’s mid-size crossover is not for driving enthusiasts. Rather, it's for parents who want to enjoy a roomy SUV that can run on electric power from Monday to Friday and go out of town on the weekends. 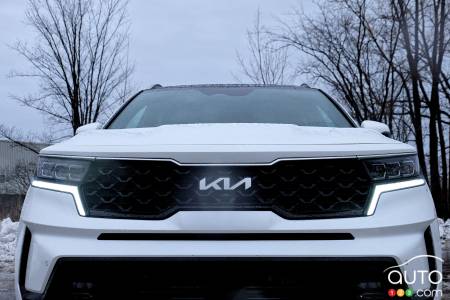 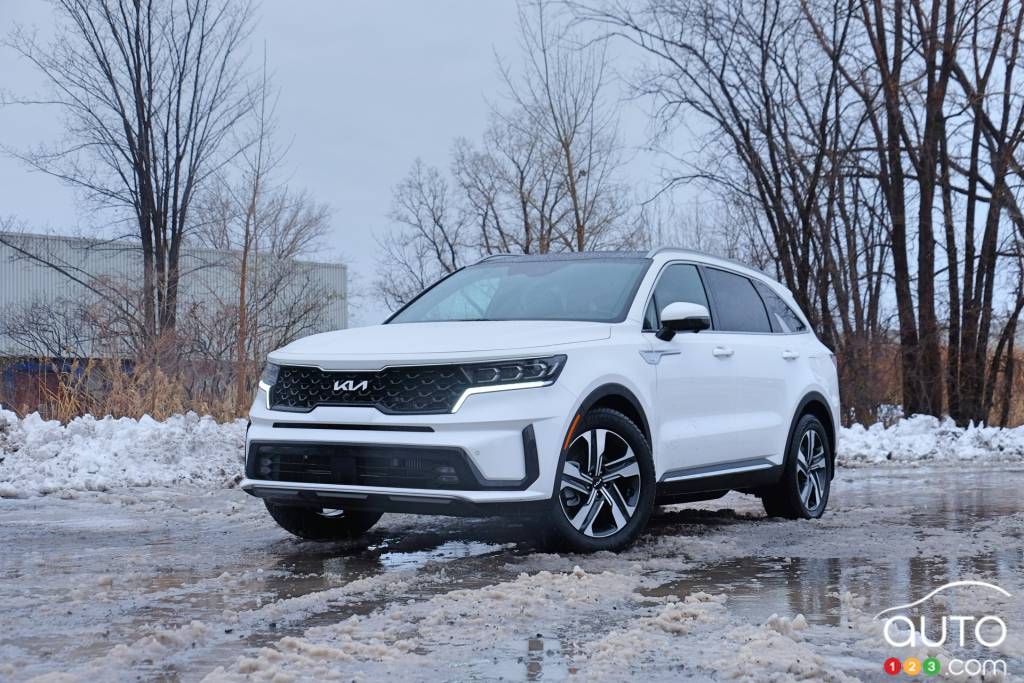 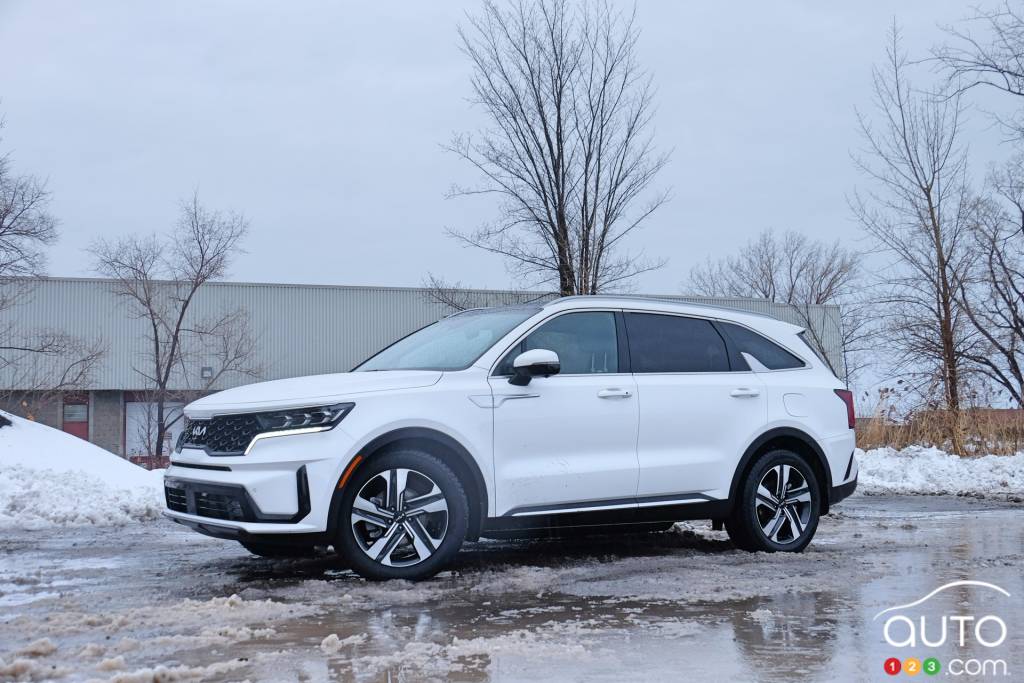 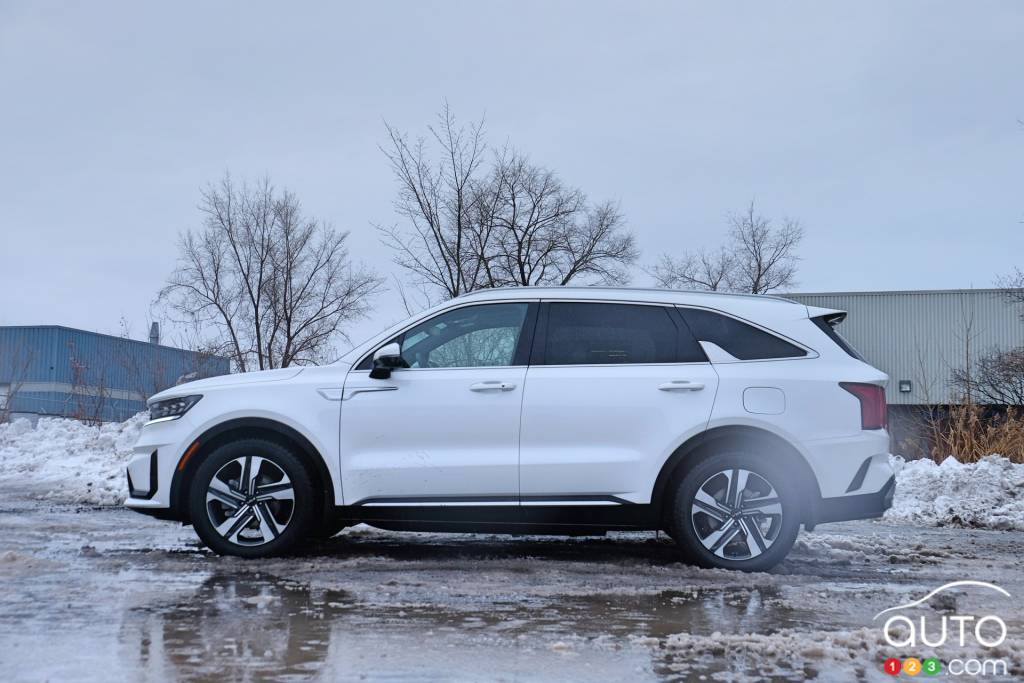 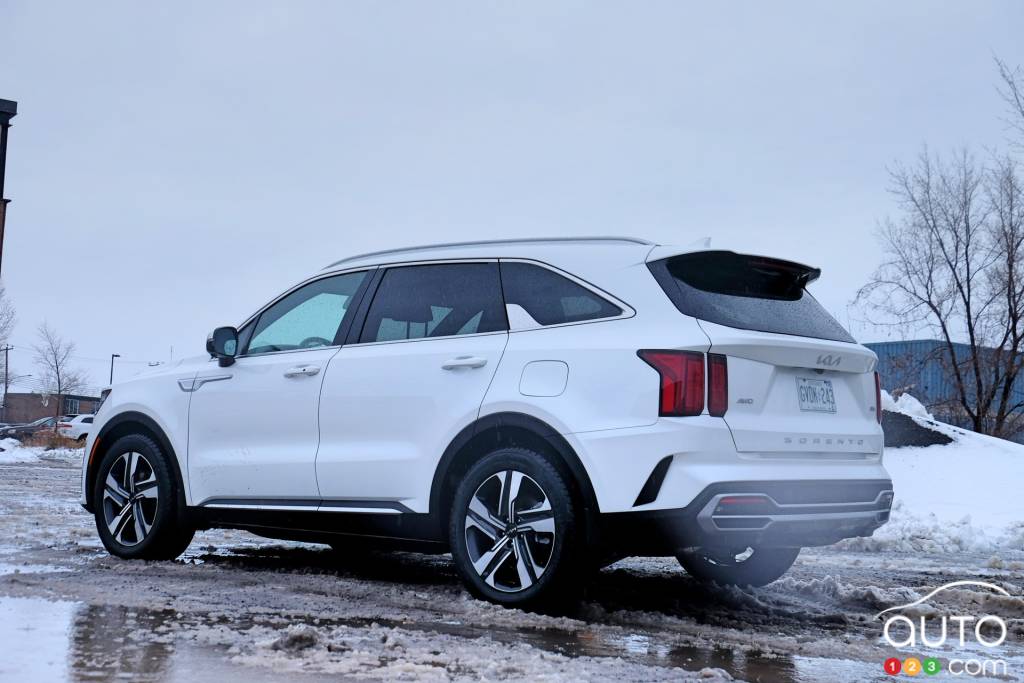 The plug-in hybrid version of the Kia Sorento lands at dealerships priced at $44,995. The PHEV model delivers 51 km of electric range and it will later be so...

Kia has shared more details about its EV6 electric car. Notably, there will be several variants in the product offering, including rear-wheel drive and all-w...