In North America, the only engine offered with the Toyota Supra is an inline 6-cylinder that produces 335 hp and 365 lb-ft of torque. You’ll recall that this powerplant is borrowed from the BMW toolbox, the two companies having collaborated to develop the model, as well as the BMW Z4.

In other markets, however, the sporty Supra is offered with a few 4-cylinder options. According to Motor Trend magazine, the announcement of a 2.0L turbocharged 4-cylinder for the North American market is imminent. In fact, confirmation could come next weekend during the presentation of the Daytona 500, which kicks off the NASCAR season. Last year, Toyota was the dominant player in the American race series.

Motor Trend "learned" this news in an interview with Ed Laukes, Toyota's Vice President of Marketing. When asked if it was possible a Toyota Supra with a smaller engine might make it onto American soil, the exec replied that we should "stay tuned in the coming week". Given that the Daytona 500 is being held next weekend, the connection is an obvious one to make.

BMW does offer a 2.0L 4-cylinder with 255 hp and 295 pound-feet of torque with its Z4. It's unclear what Toyota would aim for in terms of power with a base Supra, but an entry-level variant with 225 hp is available in Japan. What's more, a 4-cylinder Toyota Supra has already been certified for sale by the California Air Resources Board (CARB), which means that at least a few steps have already been taken towards certification.

Our Review of the 2020 Toyota Supra

Of course, if the announcement comes as expected next weekend, we'll still have to wait and see if Canada is also in the plans for such a move – although it seems likely that our market would get it as well. 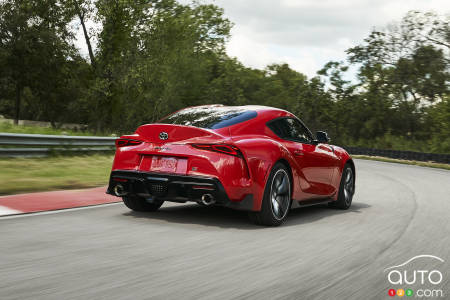 A 4-cylinder Turbo and More-Powerful 6-cylinder for the 2...

For its second year on the market, the 2021 Toyota Supra will benefit from a more-powerful 6-cylinder engine, as well as a new 4-cylinder unit. No word yet o...

Return of the Toyota Venza?

Reports indicate that Toyota is planning to bring back the Venza to the market two years after pulling it from the lineup. The new version would be a five-se...