Auto123 reviews the2020 Acura RDX, beautified with the A-Spec package

It’s been a year since the redesigned RDX SUV arrived on the market, and the initial enthusiasm regarding the new product’s looks and performance has been stamped and certified by owners doing the on-the-ground driving. The Acura RDX is now the best-selling model in the luxury carmaker’s North American lineup. According to Acura, it’s also the second-favourite luxury SUV among American buyers in the segment.

It’s not hard to see why, frankly. This new model is sharp-looking, performs crisply and offers a comfortable, premium interior environment. A useful exercise is to compare the model with its larger sibling in the Acura lineup, the MDX SUV. The new RDX stands in almost direct opposition to that staid, nondescript and long-in-the-tooth model.

How so, precisely? Well the RDX is sleek, aggressive and streamlined in its exterior styling where the MDX is squarish and anonymous; it features a responsive powertrain that delivers sporty driving dynamics where the MDX’s is plodding and workmanlike; and it’s much younger inside, featuring a more-modern interior and more advanced tech. A-Spec
My tester for the week was decked in the A-Spec package, which doesn’t alter the performance of the SUV but does much to make that sleek outer shell (and premium interior) that much more seductive. It sticks the RDX on bigger 20-inch alloy wheels (and wider tires), and gives it distinctive black trim both inside and outside, LED fog lights, power-folding side mirrors, special badging, etc. You also get a premium 16-speaker ELS Studio surround-sound audio system, heated steering wheel, Alcantara leather seating with contrasting stitching, metal sport pedals, ventilated front seats (heating is standard on all versions). I think buyers will find it hard to resist the small extra splurge required to get this package that really enhances the visual appeal of the RDX. But as mentioned, just keep in mind that it’s an esthetic package, so it won’t boost the performance of the model to match the more striking looks.

The powertrain
That said, the performance is no slouch to begin with, so you’re not putting lipstick on a pig here. The engine (and there is only one) is a 2.0L 4-cylinder turbo unit that delivers 272 hp and 280 lb-ft working with a 10-speed automatic transmission. In Canada, every version of the RDX gets Acura’s Super Handling All-Wheel Drive (SH-AWD) system as standard equipment, part of a comprehensive list of features and functions that buyers won’t have to pay extra to get (FYI, Apple CarPlay yes, Android Auto no). In my week of driving I did have occasion to drive the RDX on snow, though not in particularly difficult conditions. But what I got from the SH-AWD system was an air of quiet competence, to match the reputation it has earned for itself. It sends 70% of the torque to the rear wheels, and then 100% of that torque to the right or left wheel depending on need. This feature might not be a deal-maker for some buyers, but it won’t be a deal-breaker either.

The packages
Aside from the A-Spec package ($5,800 extra), buyers have the choice of upgrading their RDX (of which there is only one trim as such, and which starts at $43,990) with the Tech package ($3,300), which brings with it blind spot monitoring with rear cross traffic monitor, rain-sensing windshield wipers, navigation, rear USB ports. 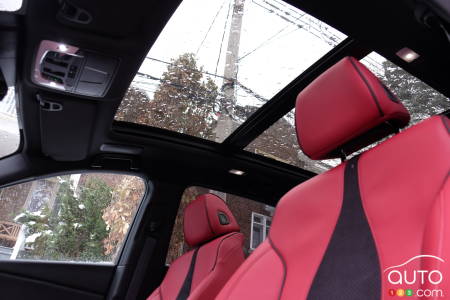 The interior
Overall, the 2020 RDX offers up a high-quality interior that leaves no room for feeling like you’re in anything but a premium vehicle. The seating is very comfortable and in the front row your ideal seat position is very easily found thanks to the 12-way power adjust function along with lumber support. As well, the A-Spec package’s Alcantara leather and contrasting stitching give real pop to the sharp black-and-red colour scheme.

Overall, quality of construction is beyond reproach, and there’s a near-total absence of cheap-looking or –feeling materials, and no rattling or vibrating to betray pieces not fitted quite tightly together enough.

The central console has the various commands laid out in cascading style; it makes for a layout that’s less confusing than its busy appearance would have you think. Still, if you prefer minimalist, streamlined design, this setup, first introduced with the refont last year, might irk you. The large 10.2-inch screen sits atop the whole thing, looking slightly glued-on, and I have to say I look forward to the day more automakers will have fully integrated this feature into the design of the dashboard. It all looks like it could be knocked off if you tried hard enough, and it feels temporary, tacked on. But clearly these screens are here to stay, so why not welcome them fully into the design…

One last brickbat concerns that loathsome touchpad down on the lower portion of the console, apparently designed specifically to deliver frustration and induce fits of swearing every time the vehicle hits a slight bump on the road and causes you to select the wrong command. Fortunately much of what you do with your finger on that pad, you can do using buttons elsewhere. Please, make like Mazda and replace it will a wheel. Pretty please? 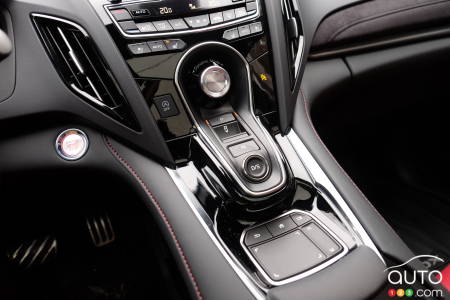 For a compact SUV, the RDX offers decent rear cargo space, offering up a maximum of 881 litres of space when you include the bins on each side of the trunk, which if nothing else can be used to keep your grocery bags from toppling over when you’re partaking of the vehicle’s cornering abilities. With the seats down, you can cram up to 2,260 litres of stuff in the RDX. On the road
As it happens I drove the RDX one week after driving the larger MDX, and the contrast was all to the advantage of the smaller SUV from Acura. The RDX delivers perky acceleration as well as crisp handling thanks in part to tight, responsive steering and in other part to the stiff chassis of the vehicle. Perhaps the biggest compliment you can give to an SUV with sporty ambitions is to say it drives like a sporty car, and the RDX earns it.

Oftentimes with compact or larger SUVs, the Sport mode is there for making the engine screech and little else. But here, once I switched the RDX into that mode it stayed there for the rest of the week. While doing that does delay upshifts, there was no notable engine screeching, instead the tighter parameters ensure driving dynamics that feel tauter than in regular mode.

The 2.0L 4-cylinder turbo engine provides sufficient power to handle what is, for a compact SUV, a relatively heavy vehicle (2,280 kg). Some have clamoured for a V6 option with the RDX, but frankly I don’t see the need for it. Fuel consumption
The 2020 Acura RDX is rated at 11L/100 km and 8.6L/100 km (city/highway), for a combined 9.9L/100 km. With the A-Spec package and its bigger wheels, however, the RDX fares a little worse at the pump, with 11.3L/9.1L/10.3L per 100 km (city/highway/combined). As usual, winter driving plays some havoc with those numbers, so that my total after a week of (admittedly city-heavy) driving was a mediocre 13.5L/100 km. Maybe I could have switched off of Sport mode and improved on that, but what would have been the fun…

Conclusion
The 2020 Acura RDX is an excellent choice in the premium compact SUV segment, and that’s before you factor in its relatively modest price point in comparison with the German big guns. The A-Spec package gives the model added sporting pretentions without actually injecting it with a steroid boost, but no matter: the RDX comes out of the box a nimble, responsive athlete, blessed with a nervous accelerator pedal, a ready-to-play engine-transmission combo, a Sport mode that actually makes a positive difference and a properly stiff chassis.

You can add to that a seductive purr from under the hood, a thoroughly high-class interior and a lack of anything major wrong with it. There is the question of the fuel consumption, but if you do a more balanced mix of city and highway driving than I do, you should do better on that front than I did. 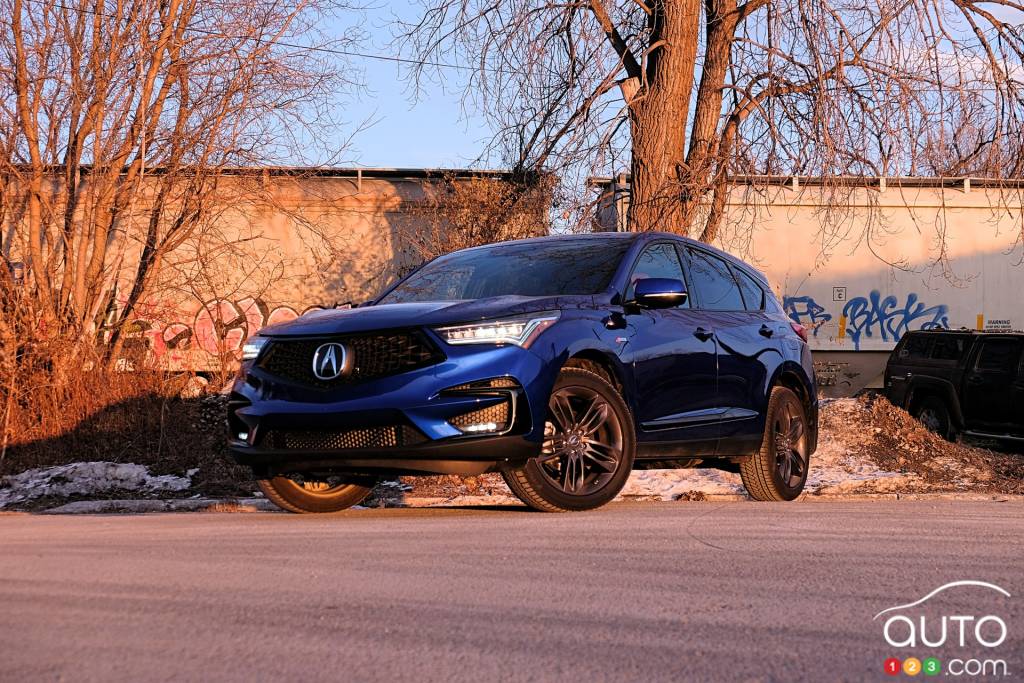 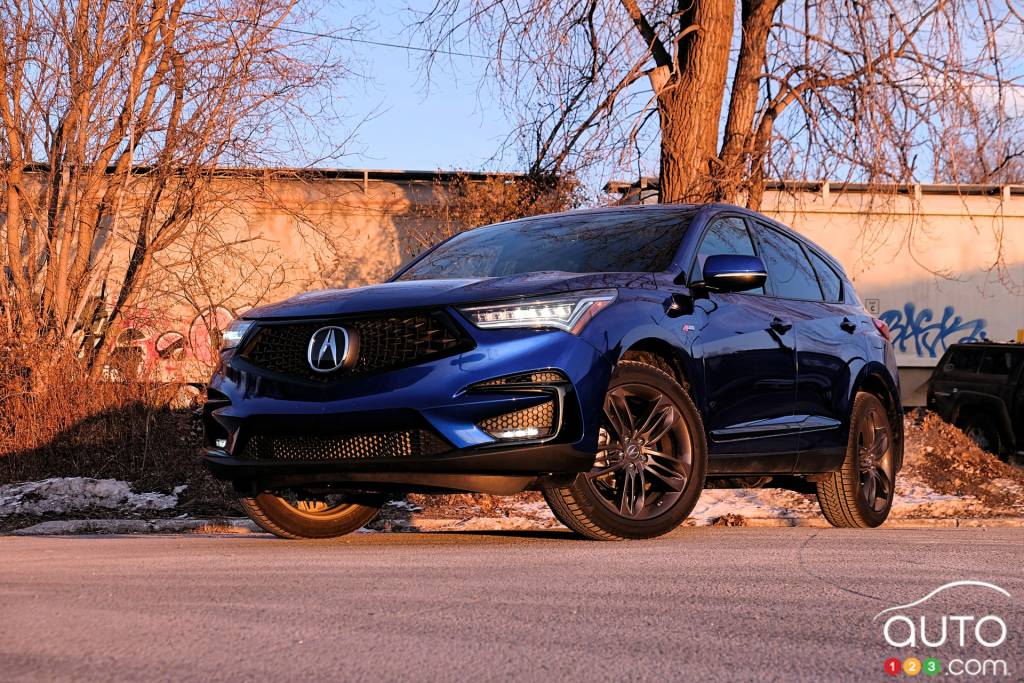 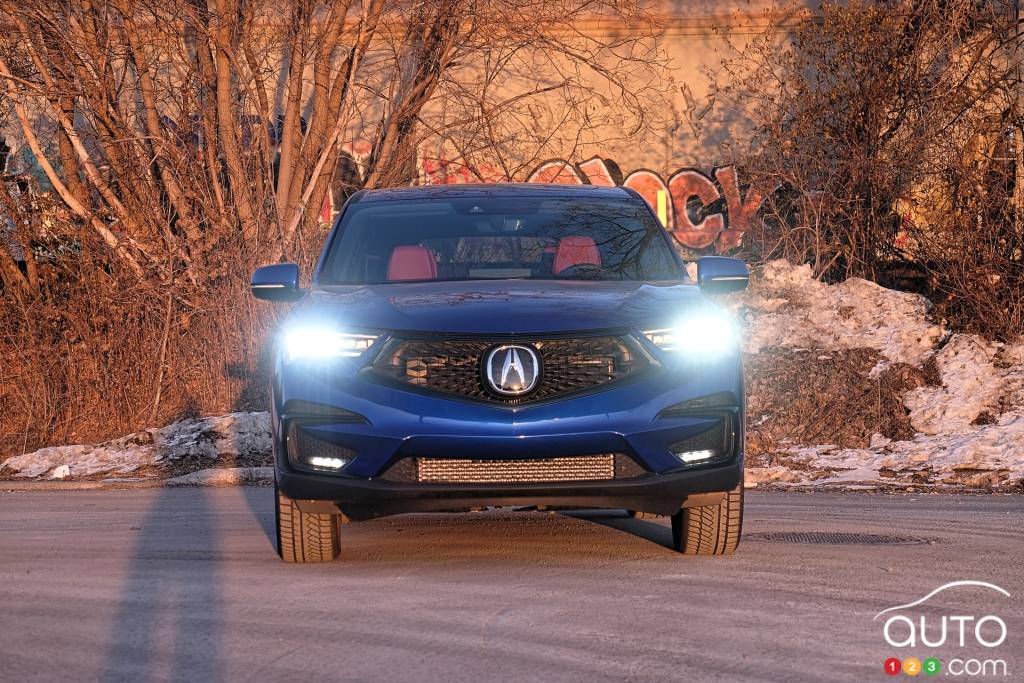 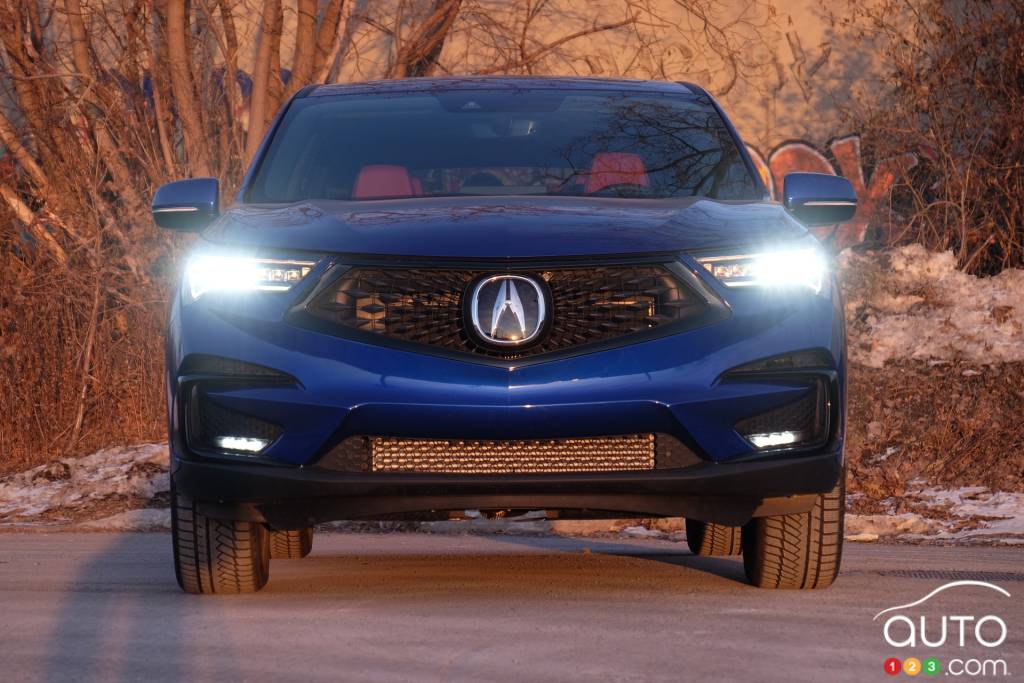