Toronto, ON – It wasn’t quite a state visit, but we were in an anticipatory mood as we headed over to Hyundai Canada HQ to meet up close a pre-production version of the upcoming new 2022 Hyundai Ioniq 5. Thank goodness we were there early on this horridly hot day in the Queen City (well, in Markham to be precise), as we avoided the hellish midday heat for the outdoors presentation.

Why were we as excited as Royal watchers about to get a glimpse of the Queen? Because the 45 concept on which the Ioniq 5 is based stole our and a lot of folks' hearts when it first did the rounds of auto shows in late 2019 and early 2020.

Car or SUV?
The Hyundai Ioniq 5 is the first all-electric model from the new Ioniq sub-brand created by Hyundai for its future battery-electric vehicles. It is also the Korean automaker’s entry in what promises to be a ferociously fought-over category in another year’s time, that of the all-electric, non-luxury compact SUV.

By 2023, that category will see a number of major new models slugging it out to draw in buyers ready to take the leap into all-electric mobility, for instance the Volkswagen ID.4 and Ford Mustang Mach-E (both already with us), the Nissan Ariya (recently delayed, but still coming), the Kia EV6 (which we’ll also be meeting up close and in the flesh in the coming weeks), the Chevy Bolt EUV, and, a little further out on the horizon, Toyota’s bZ4X. Ioniq Oddity 1: The thing is, if you squint a little, the Ioniq 5 looks for all the world like a compact hatchback car. In fact, we heard that some Hyundai folks in the home country of South Korea actually referred to the prototype as… a compact car. Here though, it’s official, final and no argument please, says Hyundai: this is a compact CUV. Even though it does have a pretty low height for a utility model…

But what’s in a name anyways. What matters is the qualities the Ioniq 5 will offer that will make it stand out against the ferocious competition to come. And on that front, it does pretty well, from the looks of it. First of all it’s great-looking, and retro-looking, and distinctive-looking. The concept was terrific, and this production version (sorry, pre-production version, but only minor details will change at this point) has retained enough of its awesome visual points to get us excited about driving it around. There are pleasing edges to the lines and the silhouette, particularly in connection with the angular – and pixelated - front and rear lights. The door panels have a straight cut crossing them diagonally as well, another distinctive touch.

The door handles, meanwhile, are recessed into the doors and angle out with a nudge. I just wonder what a good ice storm will do to them. Maybe that will be one of the minor changes still to come before production starts (in August). 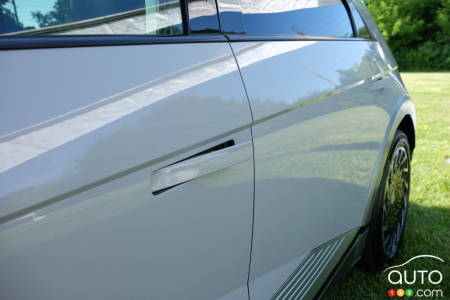 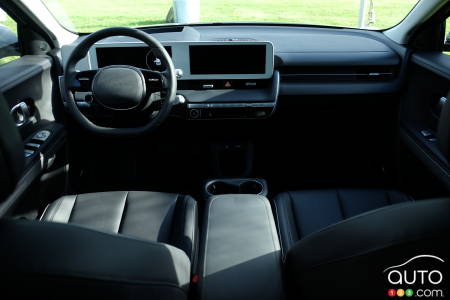 Spartan inside
This is where it’s worth going out of your way to see a vehicle in the flesh. Taking a seat inside gives you a far better idea of the overall interior space, the feel of the environment and the approach to tech and UX for the dash, etc. than photos can ever hope to.

The first thing that came to mind once I settled in was, this is a spartan space. The lower console is half, well, air. And the part that’s not air can slide forward or backward to create more space in front or in back according to preference. The floor is totally flat, meanwhile, so there’s just a ton of room for feet, purses and plastic bags holding whatever.

Which brings me to… 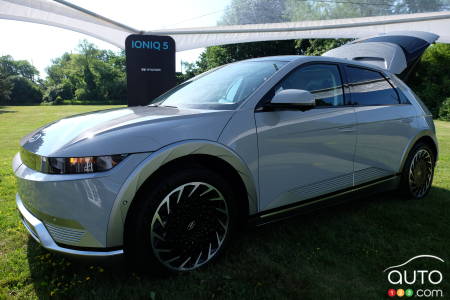 Ioniq Oddity 2: Whether you consider this a compact hatchback car or a compact CUV, either way you’ll probably be surprised to learn that the Ioniq 5 has a wheelbase that’s longer than the Palisade! What? That is correct, and it comes in part from the rear wheels sitting as far back as possible; once you get behind those wheels, there’s virtually no car left.

The dashboard itself is spartan as heck, in fact you’ll search in vain for physical buttons. There are virtually none of them, so to do almost anything, it’s on to the large horizontal screen you go. The numbers
The Ioniq 5 will be available with one of two battery sizes, 58 kWh and 77.4 kWh; as well, buyers can choose a rear-wheel-drive configuration (one motor) or all-wheel drive (two motors). The former delivers 225 hp and 258 lb-ft of torque, the latter 320 hp and 446 lb-ft. Depending on battery size and the AWD/RWD choice, range can go from 358 km to as much as 480 km. Hyundai stressed though that the numbers are preliminary and estimates; their fervent hope, I was told, is for it to be a very marketable 500 km in the end. The larger battery set-up, by the way, gives an 0-100 km/h acceleration time of under 5 seconds.

Pricing has not been announced as yet, though that should be forthcoming as the model enters production in South Korea this coming August. Hyundai is taking pre-orders already, however, and we’re told the vast majority of orders to date are for the extended-range, all-wheel drive configuration.

By the way, you can power a small fridge or a coffeemaker with the Ioniq 5, the battery system of which is blessed with what’s called bi-directional capability. Meaning you can use the charge in the battery pack to make coffee via an adaptor plugged into the charge port. Which the good folks at Hyundai did for us. Perfect for the searing heat. 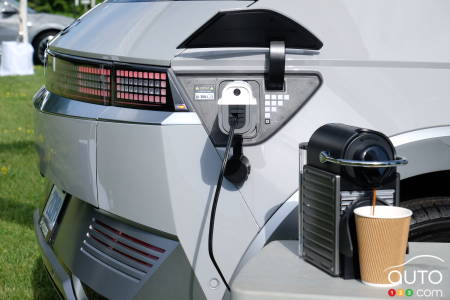 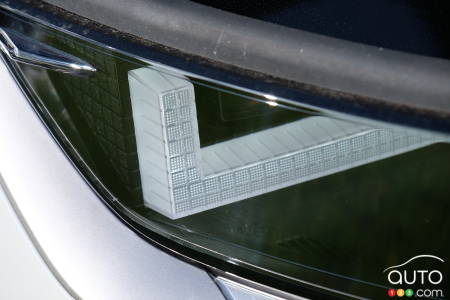 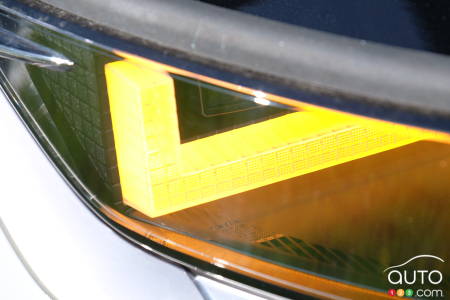 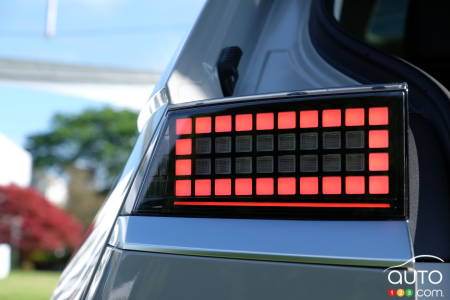 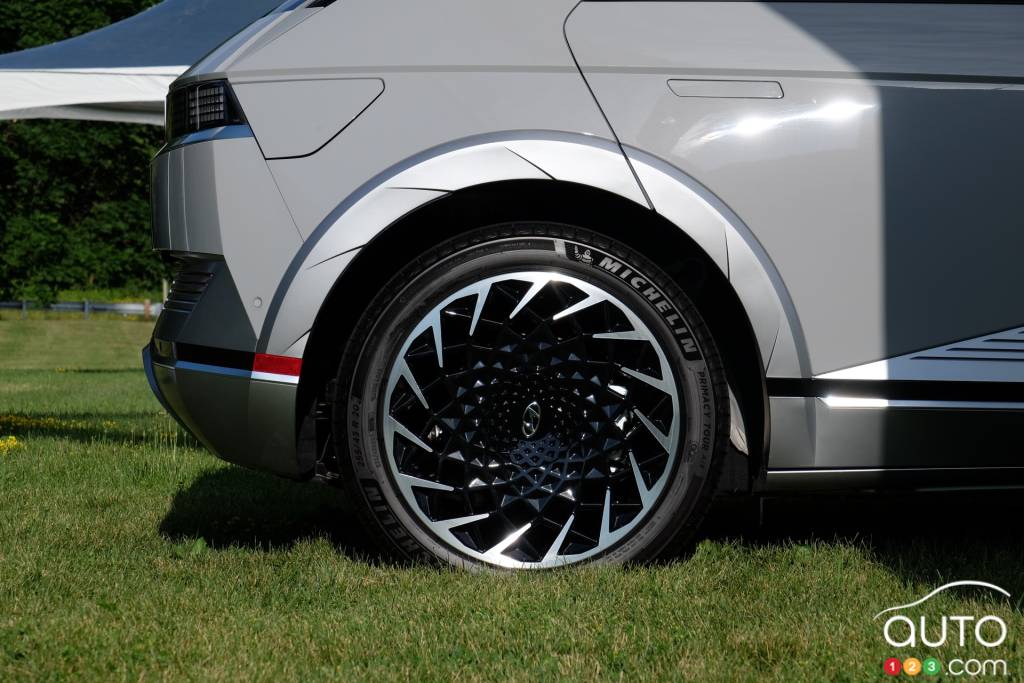 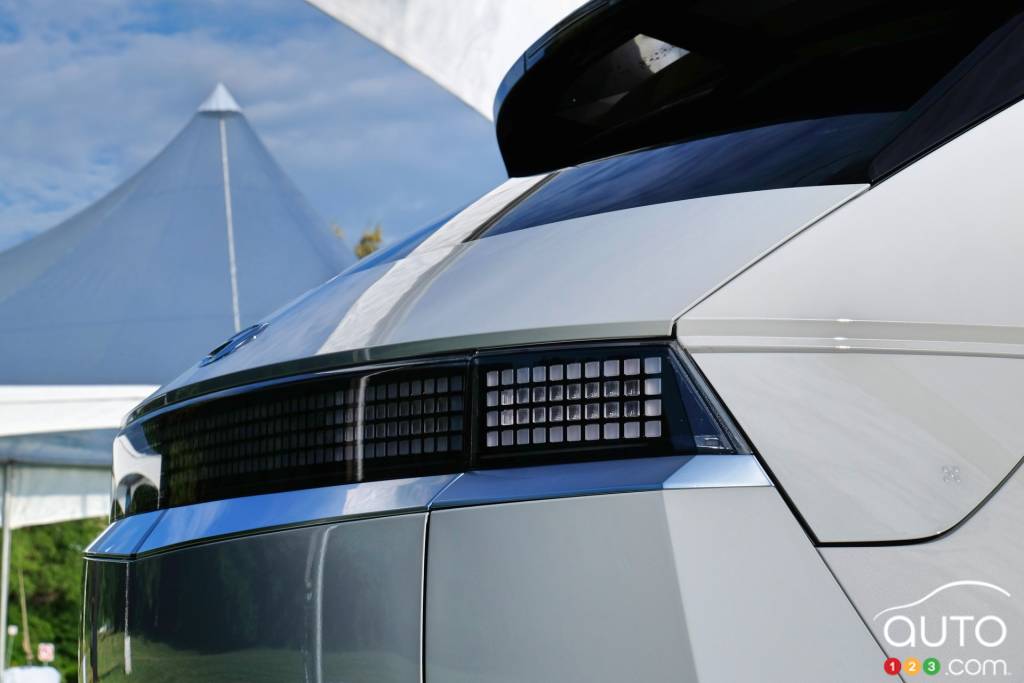 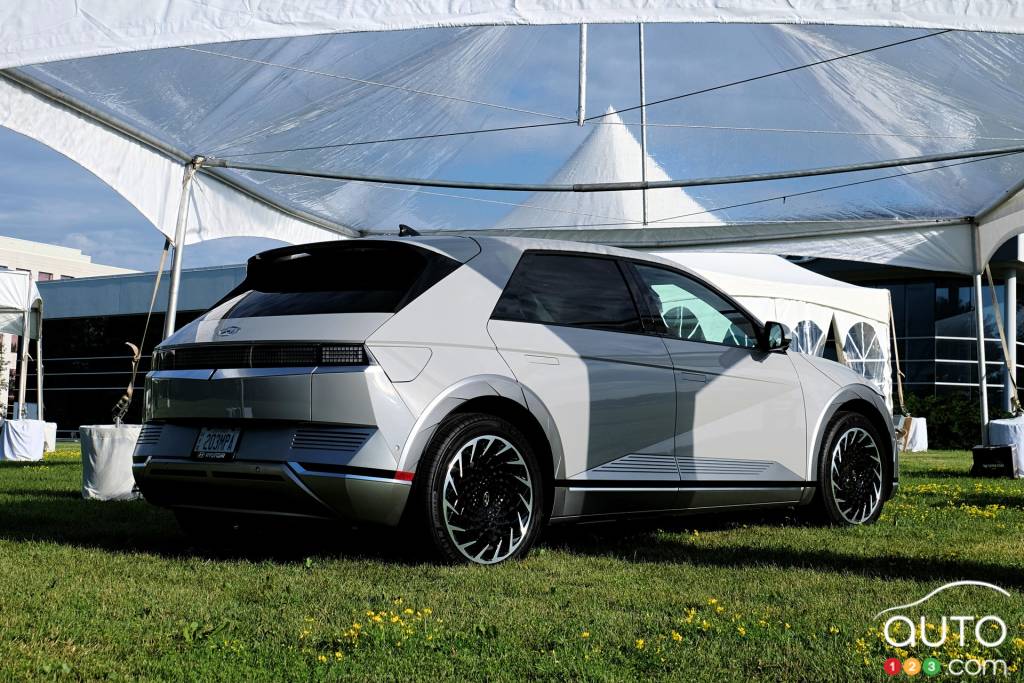 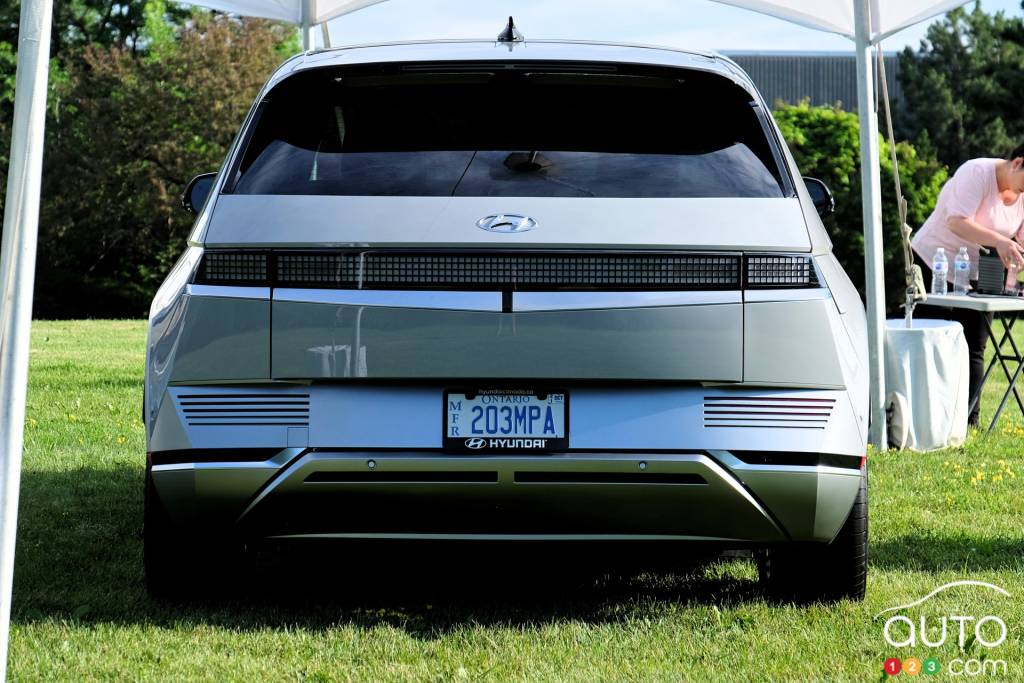 The all-new, all-electric Hyundai Ioniq 5 will hit the North American market in the fall of 2021; yesterday Hyundai gave the EV, which depending on battery p...