Auto123 gets in a first test drive of the 2022 Nissan Pathfinder.

Kingston, ON - Nissan first unveiled the new edition of the venerable Pathfinder earlier this winter, and good thing because the SUV as it stood was in dire need of a makeover. Since that virtual launch, the cold weather has given way to summer heat. Time for the new fifth-generation Pathfinder to make its in-the-flesh debut.

The Canadian division of the Japanese automaker invited a few members of the Canuck automotive press to the Kingston area of Ontario to showcase the new Pathfinder. The models still no doubt resonates with the older generation of fans, who remember fondly the 4x4 that debuted in the 1980s, when an SUV was as refined as a work truck. Of course, nearly four decades later, the Pathfinder is a bit more luxurious and comfortable than its first generation.

Ruggedness as a starting point
A renewed focus on toughness was evident in February when Nissan unveiled – virtually - the new Pathfinder. It adopts a more traditional 4x4 silhouette, especially with that forward-sloping C pillar on the sides of the vehicle. At the front, those who are familiar with it will feel at home with the V-shaped grille that occupies most of the bumper and separates the knife-sharp headlights. Eagle-eyed observers will also notice that those headlights are quite similar to those on the front end of the big Armada.

This first drive in Kingston revealed a number of things, but the first point is that the Pathfinder will no such a wallflower on the road, unlike the outgoing model, too anonymous in the eyes of some (like me for instance). The 2022 model-year also brings the possibility of topping the SUV with a black roof, contrasting with the colour of the SUV. That’s an option that already exists elsewhere in the manufacturer's lineup.

With the jazzy 20-inch wheels, the Pathfinder Platinum stands out even more, as evidenced by the reactions of pedestrians and motorists I encountered along the way.

Tech’s the word inside
We’d already been privy with Nissan's official photos to a dashboard that looked light years ahead of the previous one. Its more streamlined presentation looks good on the Pathfinder, especially with this new, more assertive look. The two-screen layout won't win any design awards, but on the other hand, this reorganization of the driver's environment makes it easier to manage in the day-to-day, especially in regards to climate system controls and to the centre console, which now hosts an induction charging pad, a Rogue-like gear knob, and even a thumbwheel to select the right driving mode.

And what can I say about the flat-bottomed steering wheel that's been installed in almost all of the brand's new models? I have to thank the manufacturer on behalf of driving enthusiasts, because this steering wheel fits perfectly in the hands. However, the controls integrated into the steering wheel are a bit complicated to use because of the multiple menus on the information screen. In any case, this operation should always be performed when the vehicle is parked in a safe place.

While there are still a few cheap plastic elements here and there, there is the same sense of quality seen in the recent Rogue. Nissan needed to up its game in this area, and it evidently has. The leather seats are comfortable in the first two rows, though a little more support wouldn't hurt. And as promised, storage is one of the Pathfinder's qualities, as is the flexibility - the name says it all - of the EZ FLEX system that makes access to the third row easier. Don't think the third row is as accommodating as the second, but it's better than in the previous version.

A more inspiring Pathfinder?
The 3.5L V6 engine is carried over from before, but it no longer works in concert with a continuously variable transmission to send power to all four wheels. Nissan is gone with a new 9-speed automatic unit, a transmission that will also be seen in the new Frontier set to arrive later this year.

Nissan, probably the biggest advocate of the CVT in the industry, claims that this change of plan will even improve fuel economy by 2 percent. It’s a small gain, but a gain nonetheless!

A bigger gain proffered by the automatic transmission is in terms of driving pleasure. We're not talking about a revolution here, but all the same, acceleration is more gradual, less jolty, and the 6-cylinder no longer needs to spin at high revs when your right foot gets insistent. Not coincidentally, highway passing manoeuvres are more pleasant, with the transmission better at downshifting into a smaller gear to propel the vehicle. That's a change from the V6 coupled with the old CVT, which generated its share of complaints.

On the other hand, it's clear that this automatic unit has been calibrated especially to reduce fuel consumption, because in Auto mode (the default mode), the Pathfinder is slow to respond. Which means you still have to push the right pedal harder to get any semblance of sportiness. Things improve in Sport mode, but you’re still not in a dynamic realm. The crossover wasn't developed to break track records. Its mandate is first and foremost to transport the family safely with a level of comfort.

Still, the Pathfinder is a bit sharper in it behaviour than the outgoing mode; the steering stiffens when Sport mode is selected, while the harder suspension and wider tires make for a safer ride. I even found myself skidding the vehicle like a rally car on a gravel track. Not bad for a vehicle of this calibre!

Fuel consumption during my drive averaged just over 11L/100 km, which is close to the 11.6L/100 km calculated for the city by EnerGuide. The average reported by Natural Resources Canada is 10.5L/100 km. With a more leisurely driving style, this result is quite attainable, as long as you don't overload the vehicle or tow a trailer, for example. Weight is enemy number one after all!

The last word
Aging as it was, the Pathfinder was at a crossroads. A redesign was definitely in order, and the manufacturer was right to make changes like subbing in the new automatic transmission, giving it a more robust appearance and integrating a bunch of new technologies on board. To attract buyers in this segment, you have to outperform or at least match the competition. The 2022 Pathfinder is definitely back in the main peloton. 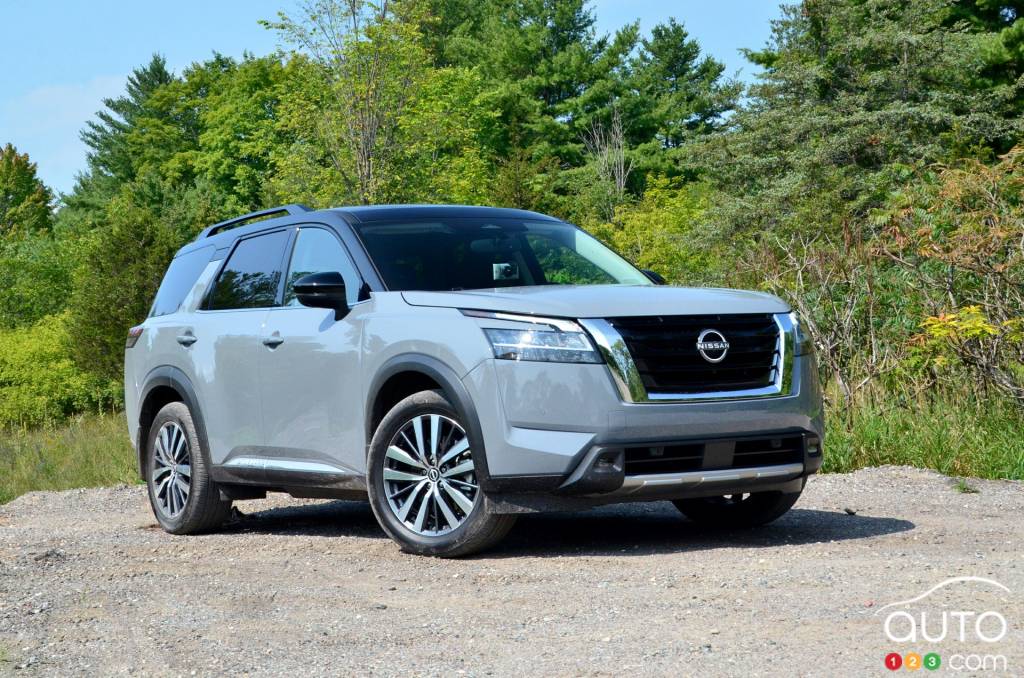 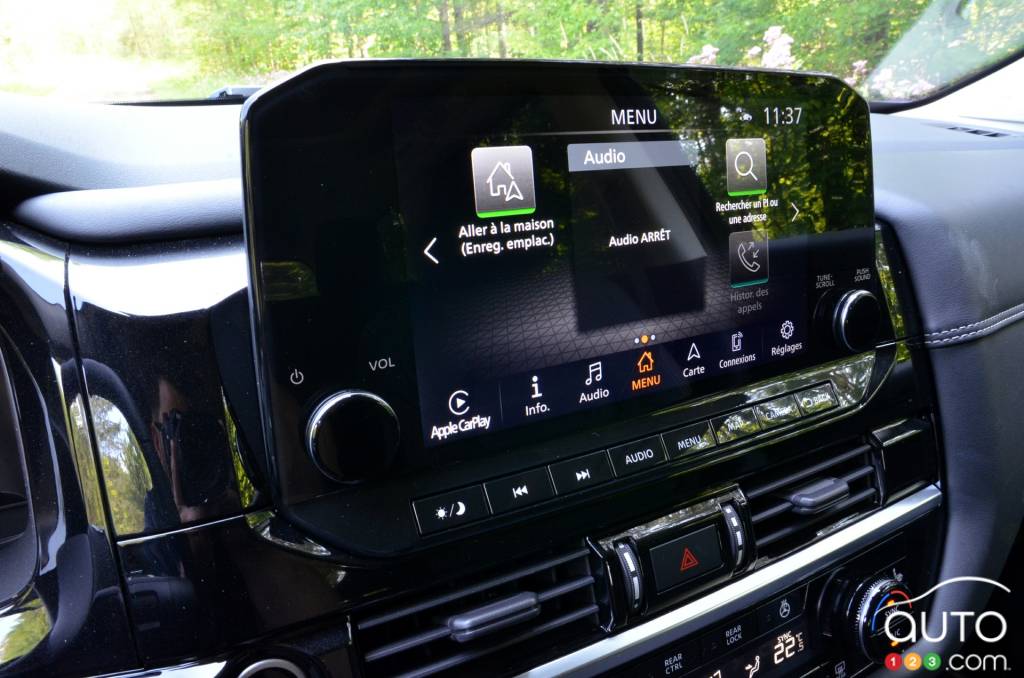 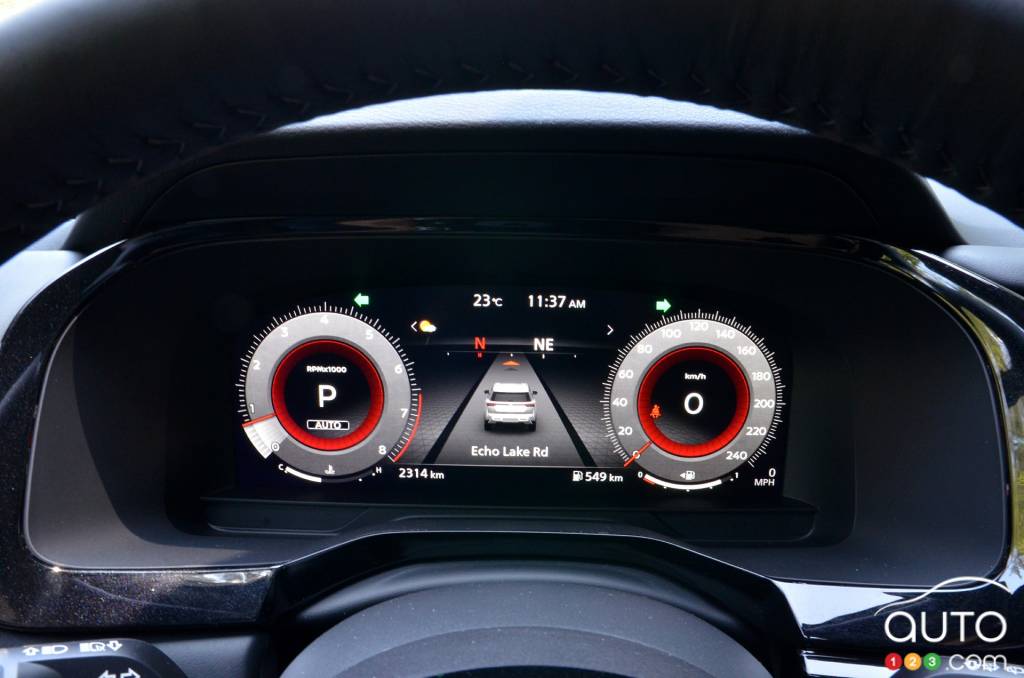 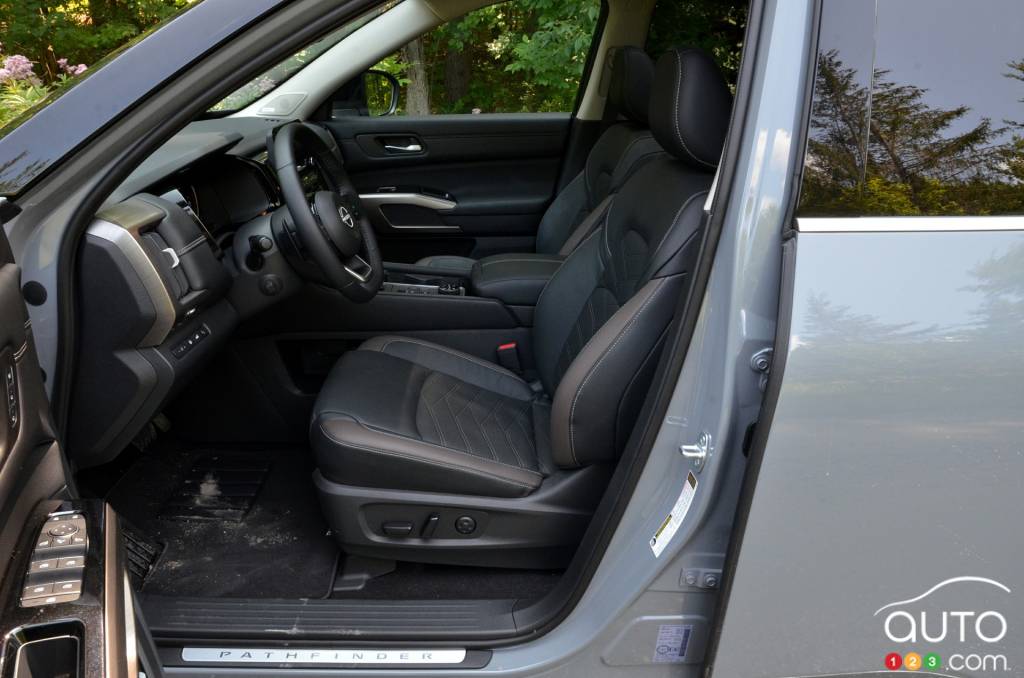 Nissan Canada has just announced pricing for its new 2022 Pathfinder. The next-generation SUV is expected to hit dealerships this summer and will carry a sta...

The Interior We Can Expect From the 2022 Nissan Pathfinder

Nissan has shared additional information regarding the interior environment of the new 2022 Pathfinder, notably in terms of living space, storage and cargo r...